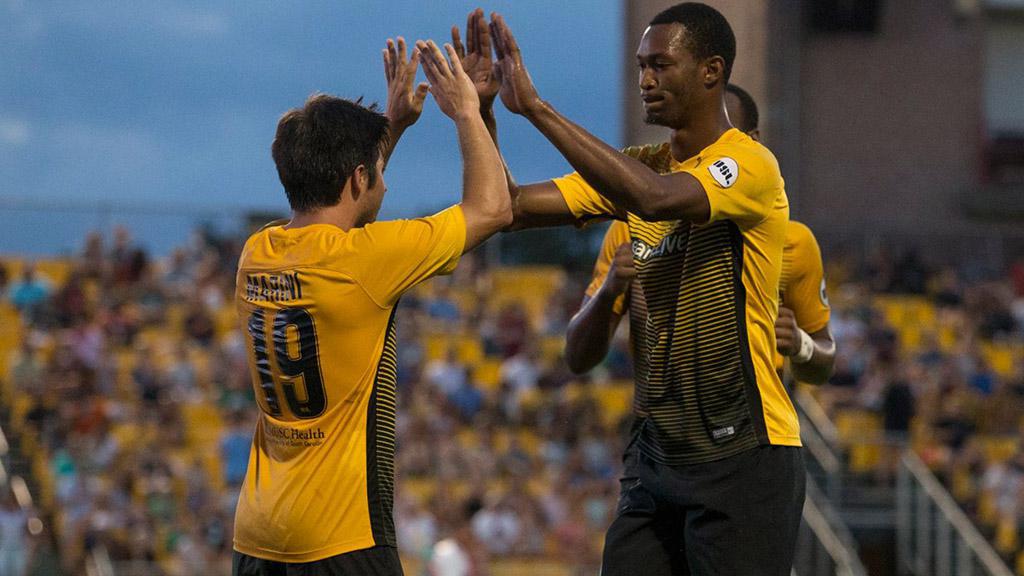 TAMPA, Fla. – The United Soccer League, one of the most prominent Division II leagues in the world, ramps up for its second full week of preseason this week as one of the historic events on the calendar arrives on national television for the first time. The 2018 Carolina Challenge Cup will see the USL’s Charleston Battery play host to Major League Soccer’s Atlanta United, Columbus Crew SC and Minnesota United FC for a week of action at MUSC Health Stadium that will be broadcast in full by beIN Sports across the United States and in 29 Caribbean nations by Flow Sports. The Tampa Bay Rowdies’ Suncoast Invitational also kicks off on Saturday with a doubleheader that sees D.C. United face the Philadelphia Union before the Rowdies square off with the Montreal Impact. Sacramento Republic FC and Phoenix Rising FC will also face tests from MLS clubs, as Seattle Sounders FC visits Papa Murphy’s Park on Thursday night, and Rising FC plays host to the Colorado Rapids and Sporting Kansas City in the Mobile Mini Sun Cup.

In the USL’s 11 Preseason Things to Know, Nicholas Murray looks at head-turning debuts for USL newcomers Nashville SC and Las Vegas Lights FC – both of which welcomed sellout crowds to their preseason debuts – the renewal of the partnership between Reno 1868 FC and the San Jose Earthquakes, and a preseason meeting that saw the Tampa Bay Rowdies and FC Cincinnati square off at IMG Academy. 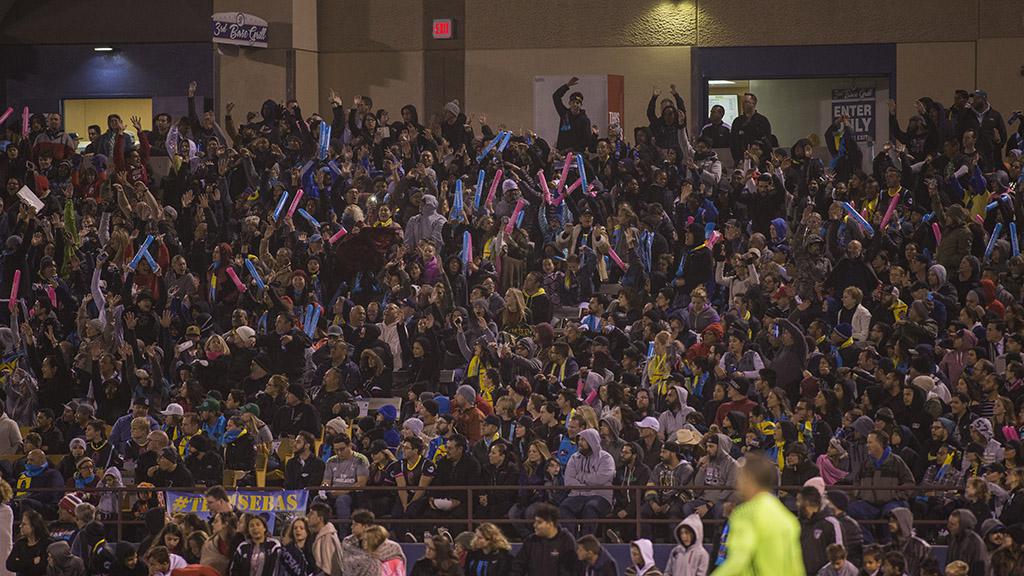 Congrats to the man Ryan for being named our club captain and for being my first interview haha!! #CaptainRyan #TheBootMicIsBack #MikeyTheReporter suggestions for my next mic? @SanAntonioFC pic.twitter.com/ccrlOPFTOB 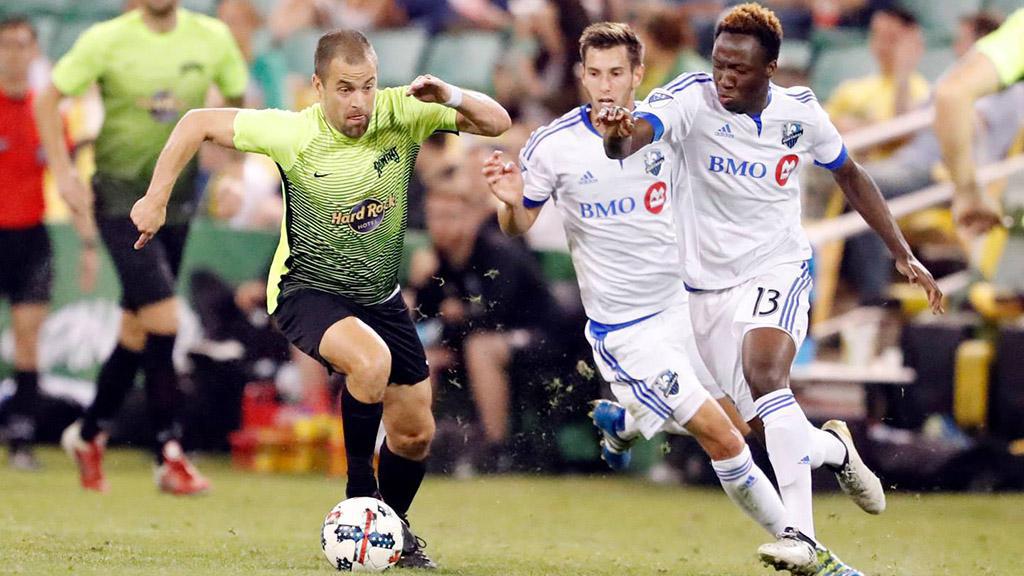 Wednesday, Feb. 14
Phoenix Rising FC vs. Colorado Rapids
Phoenix Rising Soccer Complex, Phoenix, Arizona | 9 p.m. ET
Phoenix Rising FC takes to the field for its second game of the 2018 Mobile Mini Sun Cup after a promising display against the New York Red Bulls this past Saturday that was spoiled by a late letdown, which saw the Red Bulls score twice in the closing stages for a 3-2 victory. While that took some of the gloss off the performance, there was plenty for Head Coach Patrice Carteron’s side to build on, as it faces a Rapids side that is now under the stewardship of former New Zealand national team coach Anthony Hudson.

Thursday, Feb. 15
Fresno FC vs. LA Galaxy
Harder Stadium, Santa Barbara, California | 10:30 p.m. ET
Fresno FC gets its first proper test of the preseason with a visit to face the LA Galaxy after having taken a 3-2 victory against the Premier Development League’s Ventura County Fusion on Monday night. Renato Bustamante was the player to watch for the Foxes against the Fusion as he notched a goal and an assist, while the contest will offer the chance for Fresno midfielder Alejandro Covarrubias – who contributed strongly to the LA Galaxy II’s Western Conference championship in 2015 – to potentially square off with some of his former teammates.

Sacramento Republic FC vs. Seattle Sounders FC
Papa Murphy’s Park, Sacramento, California | 10:30 p.m. ET
Sacramento Republic FC welcomes the first of two high-profile preseason exhibitions to Papa Murphy’s Park as Seattle Sounders FC visits, with the game the last for Seattle prior to the start of its 2018 CONCACAF Champions League campaign next week. Sacramento earned a 2-1 victory against local opponent Sacramento Gold in its preseason opener, as newcomer Keven Aleman scored the winner in a runout that saw every member of the Republic FC squad see action.

Saturday, Feb. 17
San Antonio FC vs. New England Revolution
Kino Stadium, Tucson, Arizona | 6 p.m. ET
San Antonio will face a solid proposition, as it makes the trip to Arizona for the Mobile Mini Sun Cup with the New England Revolution entering its new era with former U.S. Men’s National Team goalkeeper Brad Friedel at the helm. SAFC has already put in some solid work this preseason, though, earning a 2-0 victory against an FC Dallas side last Sunday, as newcomer Jose Escalante notched two assists to set up goals for Ever Guzman and Kris Tyrpak. SAFC defender Stephen McCarthy could also go up against the club he began his professional career with, having made 69 appearances for the Revolution over four seasons.

Charleston Battery vs. Minnesota United FC
MUSC Health Stadium, Charleston, South Carolina | 7:30 p.m. ET
The Charleston Battery kick off the 14th edition of the Carolina Challenge Cup as they host Minnesota United FC with many newcomers aiming to impress Head Coach Mike Anhaeuser. After an offseason that saw some key departures, the Battery will be looking to experienced veterans like Taylor Mueller – who enters the season fourth in the club’s appearances list – to guide the way against a Minnesota side that features two-time USL Most Valuable Player Kevin Molino in its ranks.

Tampa Bay Rowdies vs. Montreal Impact
Al Lang Stadium, St. Petersburg, Florida | 7:30 p.m. ET
The Tampa Bay Rowdies square off with the Impact, looking to build on what was overall an impressive preseason opener against FC Cincinnati despite the 1-0 defeat at IMG Academy. Several of the Rowdies’ newcomers looked sharp, notably former New York Red Bulls II winger Junior Flemmings and Real Monarchs SLC fullback Max Lachowecki, while midfielder Leo Fernandes also had a good stint after struggling with injury a season ago. The Impact are coming off a 2-0 victory against another USL club, Las Vegas Lights FC, and should give Tampa Bay a solid test.

Las Vegas Lights FC vs. Vancouver Whitecaps FC
Cashman Field, Las Vegas, Nevada | 11 p.m. ET
Las Vegas Lights FC plays host to its second Canadian MLS opponent in a week as it welcomes Whitecaps FC to the entertainment capital of the world and will be looking to notch its first goal in club history after a promising display in its preseason opener against the Montreal Impact. The hosts held their own against the Montreal Impact last Saturday but will now be aiming to smooth out some of the mistakes that cost them a 2-0 defeat. After a sellout crowd was on hand last Saturday, Las Vegas could be looking for more of the same in the stands, too.