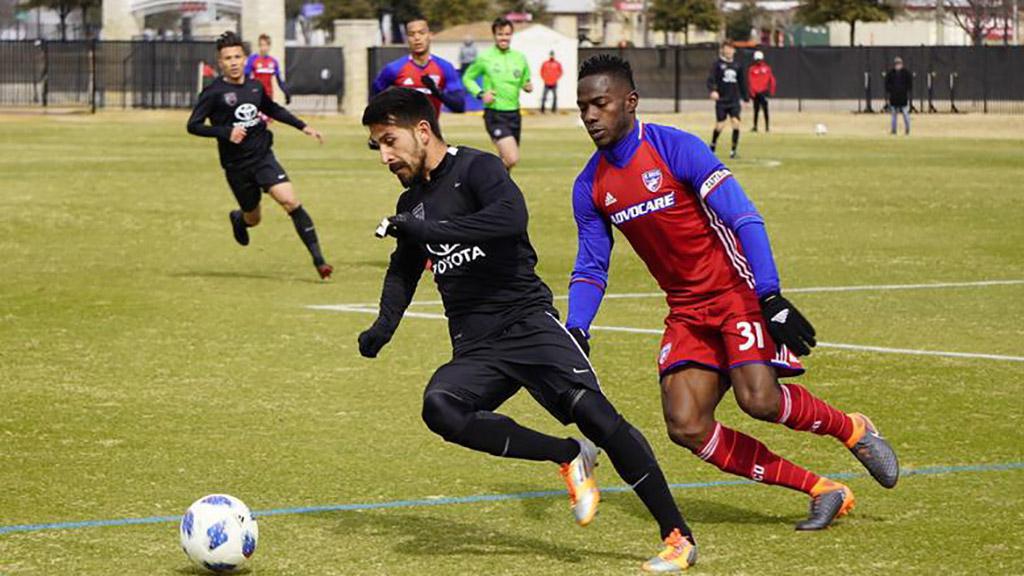 FRISCO, Texas – San Antonio FC got goals from Ever Guzman and Kris Trypak as it defeated FC Dallas 2-0 in the club’s second preseason match on Sunday afternoon. SAFC newcomer Jose Escalante notched assists on both goals to earn victory for the Alamo City club.

“We wanted the players to compete from the first whistle to the final whistle and we felt like every player did that,” said SAFC Head Coach Darren Powell. “It was a preseason match and we showed progress from last weekend to today, so now that needs to continue as we prepare to play next seek and for opening night.”

SAFC opened the scoring in the first half after Escalante made a run down the left and cut back a pass for Guzman to smash past FC Dallas goalkeeper Jimmy Maurer. The visitors doubled their lead in the second half after Escalante recovered a Dallas turnover and whipped a first time cross into the penalty area where Tyrpak headed home.

San Antonio’s starting lineup, which also included new arrivals Darnell King and Mikey Lopez, played the opening hour before the club introduced a second group. Goalkeeper Matt Cardone, who came on to replace Diego Restrepo, made a good late save to deny Dallas’ Victor Ulloa from a free kick to preserve the shutout for the visitors.

PITTSBURGH RIVERHOUNDS 3, CLEVELAND STATE UNIVERSITY 0: The Pittsburgh Riverhounds completed a weekend sweep of their scrimmages as Romeo Parkes scored a goal an added an assist against the Vikings at Highmark Stadium.

Pittsburgh took the lead 10 minutes before halftime when Neco Brett was brought down in the penalty area and Parkes stepped up to convert from the penalty spot. Parkes then played provider in the 65th minute as he set up a chance that Skyler Milne buried from inside the six-yard area. Brett then completed a strong weekend of action with his second goal in as many games in the 90th minute, converting on a breakaway after rounding the goalkeeper at the top of the penalty area.

TULSA ROUGHNECKS FC 2, UNIVERSITY OF TULSA 1: First-half goals by Jusino and Michael Gamble earned the Roughnecks victory in their preseason opener against the Golden Hurricane at the University of Tulsa Soccer Stadium.

The Roughnecks took the lead in the ninth minute as a free kick by Eti Tavares from the left side of the penalty area found Jusino at the back post, allowing the defender to fire home a close-range finish. The Golden Hurricane equalized 10 minutes later as a defensive error allowed Chase Bromstedt – who last season signed as an Academy player with fellow USL club the Swope Park Rangers – to level the score, but Gamble struck two minutes before the break as he got onto a ball over the top and finished calmly to restore the Roughnecks’ lead and earn Head Coach David Vaudreuil’s side the victory.