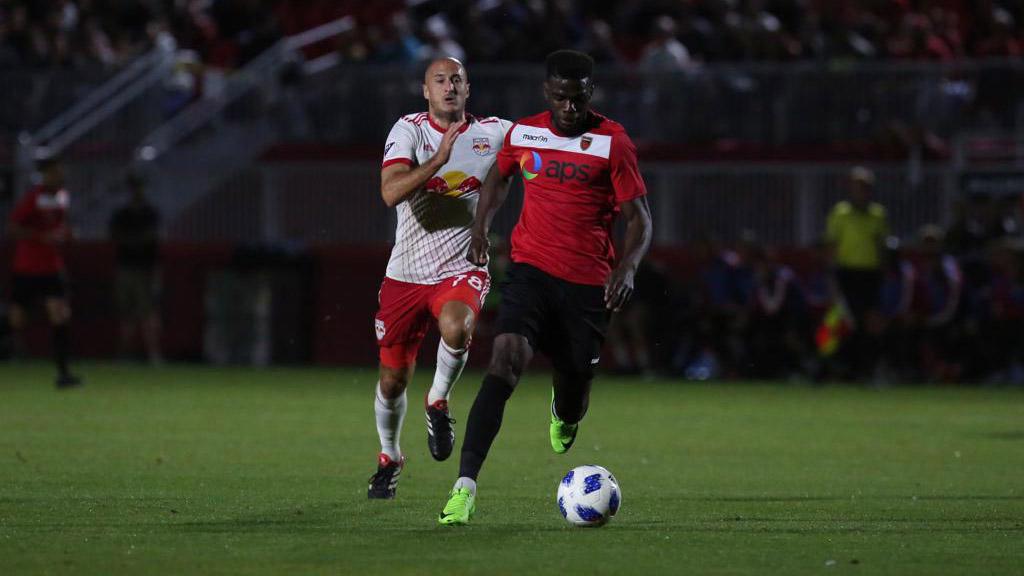 PHOENIX – Phoenix Rising FC twice held the lead but conceded late in its 2018 preseason opener as the New York Red Bulls took a 3-2 victory in front of in front of a sellout crowd of 6,620 fans at the Phoenix Rising Soccer Complex as part of the 2018 Mobile Mini Sun Cup on Saturday night.

Phoenix opened the scoring in the seventh minute as a pass by Gladson Awako toward the top of the penalty area deflected off Red Bulls defender Aurelien Collin and looped over goalkeeper Luis Robles and into the net. New York hit back eight minutes before halftime, though, as Alex Muyl headed home from Kemar Lawrence’s cross to level the score.

Rising FC regained the lead with 19 minutes to go as new signing Kevaughn Frater capped an energetic performance with his first goal for the club. The Jamaican striker was fed a perfect pass into the box from fellow new signee Devin Vega and put his finish away well.

But New York rallied to earn victory late on as 2017 USL All-League selection Vincent Bezecourt equalized in the final minute of the contest as he tucked home a finish from inside the penalty area. The Red Bulls then struck again in the first minute of stoppage time as Fidel Escobar rifled home a finish from Felipe’s short free kick to give New York victory.

PITTSBURGH RIVERHOUNDS 4, SPRING HARBOR UNIVERSITY 2: Four different players found the net for the Pittsburgh Riverhounds as they opened their preseason with a victory, with Ben Fitzpatrick being joined on the scoresheet by trialists Neco Brett, Joe Holland and Bakie Goodman.

Holland opened the scoring just five minutes in as he took advantage of a turnover forced by forward Skyler Milne in Spring Arbor’s defensive third. Fellow midfielder Goodman followed up with a late first-half tally in the 45th minute thanks to a nice area pass from forward David Goldsmith, which allowed Goodman to fire into the upper-left corner of the goal.

Goodman continued to feature in the second half as he drew a penalty kick in the 57th minute that was converted by Brett, while Brett – a former standout at local college Robert Morris – provided the assist as Fitzpatrick put home the Riverhounds’ fourth in the 72nd minute.

SWOPE PARK RANGERS 2, ROCKHURST UNIVERSITY 0: Hadji Barry scored in either half as the Rangers earned a positive result from their 60-minute scrimmage at Swope Soccer Village.

Swope Park trialist Chase Minter almost gave the hosts the lead as he forced a good save from the opposing goalkeeper, but from the ensuing corner kick Minter found Barry with a deep cross that was comfortably put away from close range. Barry added a second eight minutes into the second 30-minute period as he collected a stray back-pass and cut past a defender before finishing.

SACRAMENTO REPUBLIC FC 2, SACRAMENTO GOLD 1: Kevin Aleman scored late in the second half to earn Republic FC victory at American River College to give new Head Coach Simon Elliott victory in his first game in charge at the club.

Republic FC took the lead 15 minutes in as a free kick by Hayden Partain was headed home by Villyan Bijev. After a full set of substitutions at the halftime break for Republic FC, the Gold got on level terms just before the hour-mark as Kaba Alkebulan beat the defense to set up a breakaway chance that he put away, but soon after the hosts were reduced to 10 men as Steven Wright was sent off.

Canadian international Aleman scored his first goal for Republic FC with four minutes to go to cap the performance as he fired a left-footed shot into the top of the net. New Republic FC goalkeeper Rafael Diaz then made a key late save to preserve the victory as the visitors got their preseason slate off on the right foot.