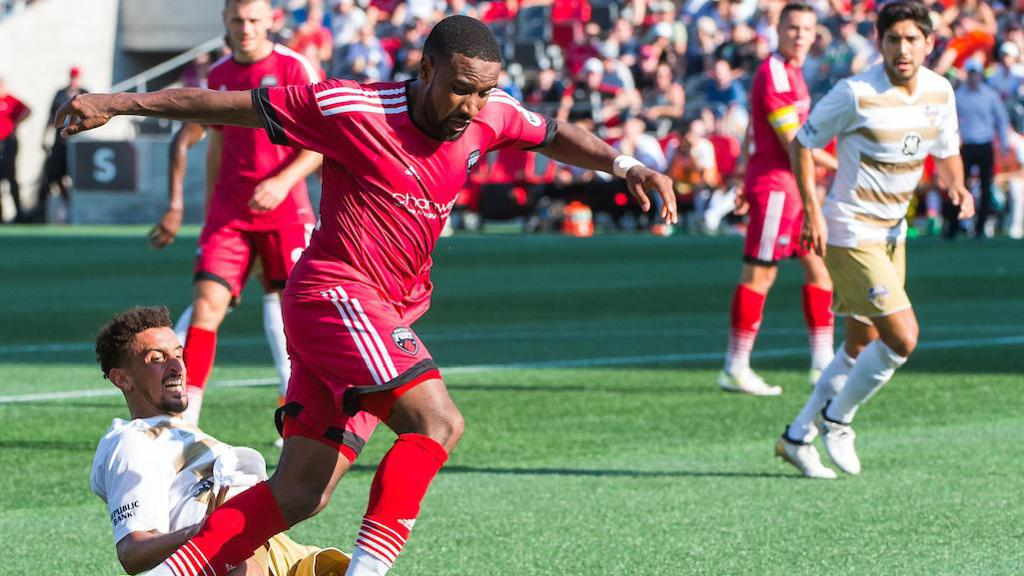 OTTAWA – Jamar Dixon is a stalwart for the Ottawa Fury FC midfield, starring for his hometown club for the past two seasons. As Dixon enters his third season with the club, with preseason training beginning last week, Dixon took some time to reflect on the journey that brought him to Fury FC, where last season he earned the club's Player of the Year award.

Dixon comes from a sporting family, his mother even making it to the highest level in her sport, playing for the Canadian National Netball team. That bred a love for sport in a young Dixon, which continued through to his earning his first professional contract in Sweden.

A midfielder who looks up to the legendary Brazilian, Ronaldinho, Dixon fondly remembered his time in Ottawa’s youth teams. Starting his love for the sport at St. Anthony’s Soccer Club before playing the bulk of his youth soccer at the Gloucester Hornets, and it was there where he was formed, and had advice to pass on to young players.

“Be willing to learn. It’s a team game, first and foremost, so you have to work as hard as you can, help your teammates. Be humble and stay focused and open-minded,” said Dixon.

On the other end of the scale is goalkeeper Maxime Crepeau, who has just moved to Ottawa after joining the club on a season-long loan from Major League Soccer's Montreal Impact. The Impact's Homegrown signing, who brings experience from the Canadian Men's National Team, is already settling into his new environment, has found a new home that he enjoys, with a team he is feeling welcomed by.

“It’s nice and calm and beautiful here, with the canal, we’re right by it on TD Place and there’s a good group of guys here, and they welcomed me very well and now I’m comfortable working with them on the field,” said Crepeau after training. “I just feel welcomed to be in an environment like this, where goalkeepers push themselves and it’s great for us and the group as well.”

FAMILIAR FACES: San Antonio FC has 18 players from its 2017 squad in its preseason training camp which began last week, a significant change from 2017 when SAFC brought in more than 18 players for preseason. That change has made life easy for both players and coaches who have been raring to get the new season underway.

“It’s great to see some familiar faces and it’s great to be back on the grass and I know the players are excited, the coaches are excited and this is where the 2018 journey begins,” SAFC Head Coach Darren Powell told the club website. “To have a lot of familiar faces that creates that consistency and that loyalty from Day 1. It’s not so much about learning and getting to know each other, and playing the name game, but it’s now about how we take this to the next level.”

One of those familiar faces is defender Greg Cochrane, a leader on and off the park for the club over the past two seasons. Cochrane knows that having such a strong core is helpful in building for a new season, and can help in integrating new players.

“Obviously it’s nice to see so many familiar faces, we know each other’s tendencies on the field but more than that, off the field we hang out with each other so it’s a good way to ease back in,” he said. It’s easier to incorporate only a few people as opposed to if it was a lot of people.”

Texas local Mikey Lopez is one of those few newcomers to the group, which can often be tricky for a new player. But Lopez has felt at home, perhaps because Texas is home. The former New York City FC midfielder previously lived in Austin with his family, just 80 miles north of San Antonio, and has received a warm welcome from the club's returning core.

“It’s good to come here and see so many familiar faces and know that they’re already a really good family and they just embraced me as another brother,” said Lopez. It’s really good feeling for me knowing the family connection is really tight and really close.” 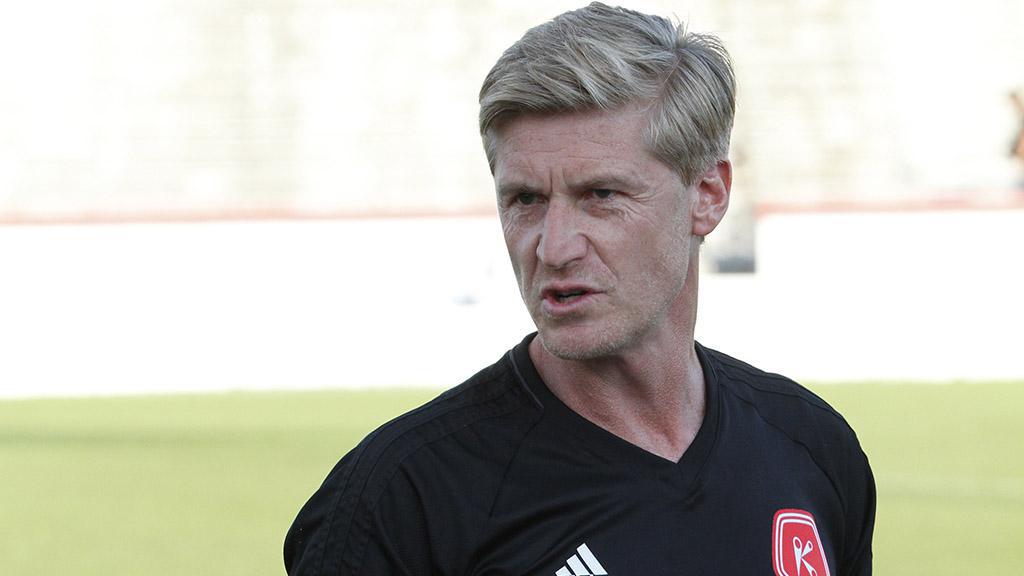 KICKERS' NEW HOPE: The Richmond Kickers’ long-serving Head Coach Leigh Cowlishaw took questions from the fans of the club in a Twitter takeover on Monday morning. There were numerous questions, ranging from hopes for 2018 after missing out on the postseason a season ago and what Cowlishaw is looking forward to in the new season.

After finishing 14th in the USL Eastern Conference the Kickers entered the offseason focused on improved performances across the board. When asked if there were any specific players he expected to improve, Cowlishaw was blunt.

“All of them, me included. We are not going to be successful without that being a reality,” said Cowlishaw.

That improvement will take work, but Cowlishaw did see some positives from the season last year, which saw the Kickers win just eight matches all year. Those lessons have pushed Cowlishaw’s squad development for the upcoming season, with some notable additions to the club's attack including former Charleston Battery forward Heviel Cordoves and former Jacksonville Armada FC and North Carolina FC striker Brian Schriver that should provide a boost in firepower this year.

“Outside of hating losing, we knew that was going to be a difficult season. We've always tried to have squads with numerous players with goals as well as assists,” wrote Cowlishaw. “We are certainly back in that mindset with this new squad, adding much more experience to this group.”

There was an exciting tease for Richmond fans regarding a potential friendly in 2018, with talks underway to secure a big team visiting this season.

“We have been in discussions with several international teams, from La Liga, Bundesliga, Liga MX  and of course English teams,” wrote Cowlishaw. “It's always a complicated process to align schedules and financial needs. We are hopeful we can secure one or two matches this summer.”

Cowlishaw enjoyed the time on Twitter, but fans shouldn't get their hopes up that Cowlishaw will join the social network to talk to fans on a permanent basis.

“[I am] certainly having a lot of fun, but chances are slim to none,” said Cowlishaw in response to a question about the matter.

NEW LEADER IN THE BULL RING: Gerson Etcheverry is getting settled into his new role in charge of Rio Grande Valley FC, his first professional Head Coaching position, and one that came about in part thanks to his ties with Houston Dynamo Head Coach Wilmer Cabrera.

A young professional when he headed to Colombia to play for America de Cali, the experience was a humbling one for Echeverry, but also provided the base for what has become a longtime friendship between himself and then-Colombian international Cabrera.

“He [Cabrera] was ‘the man’ on that team, I had just come from college and I went down there on a tryout and fortunately I was able to sign,” Etcheverry told the Houston Dynamo website. “So I was on the team, I practiced every day, but I never got any games. There were five forwards, and four of them were on the Colombian national team, so I was never gonna see the field! So it was there, just on the training field and through talking and being able to share. And being the person that he is, he took me in, welcomed me in, and from then on [we’ve been in contact].”

Fate would conspire to bring the pair together 15 years later when the two found their careers taking them to the New York/New Jersey area. For Etcheverry it was as part of the coaching staff at Seton Hall, while Cabrera was there playing with the Long Island Rough Riders, then in the USL Second Division.

Etcheverry will be looking to build a new team at H-E-B Park this season, looking to send the Toros to the USL Cup Playoffs for the second time in three years as he follows in the footsteps of his former teammate.

“Winning is important. I think having that winning mentality, that mentality to work hard, to battle, is important,” said Etcheverry. “Like anything else, winning the championship – at any level, it doesn’t matter – it’s an important goal for you to have.”