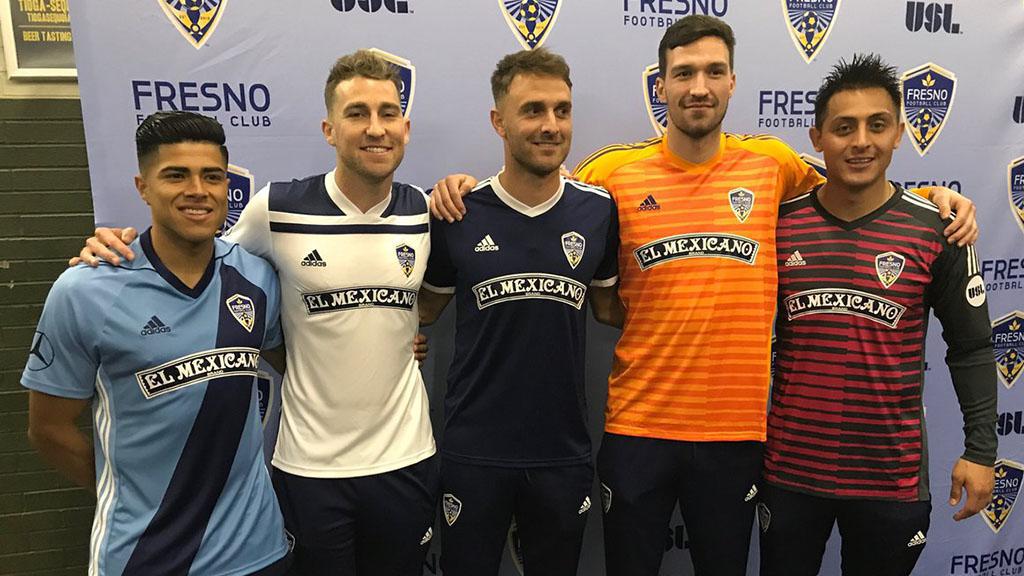 FRESNO, Calif. – Fresno FC revealed its jerseys for the club’s inaugural season on Friday night before a large crowd of fans at the Tioga-Sequoia Brewing Company as the 2018 USL expansion club’s first week of preseason ended on a high note.

Designed by adidas, the Foxes will take to Chukchansi Park this season in a sky-blue jersey with a navy-blue sash at home in the new season, with the club’s two alternate jerseys and two goalkeeper uniforms also being revealed at the event.

The jerseys also featured the El Mexicano logo on the chest, and Mercedes-Benz logo on the sleeve, after two major partnership deals were struck this week by the club. El Mexicano had been a longtime supporter of soccer in California’s Central Valley, serving as the primary sponsor of the Premier Development League’s Fresno Fuego for more than a decade, and the flagship brand of Marquez Brothers International will adorn the front of the Fresno FC adidas jersey after agreeing to a two-year partnership.

The boys have arrived and it's a great time at @TiogaSequoia! pic.twitter.com/JPUvdhwqIk

Here are the @FFCFoxes inaugural kits for the 2018 @USL season. pic.twitter.com/RCOGaa630A

The inaugural @FFCFoxes kits. From left to right: home, away, alternate, goalkeeper, goalkeeper. The word I kept hearing was “clean.” pic.twitter.com/D7vQLzuktZ

Huge turnout @TiogaSequoia for the @FFCFoxes kit release party. Good thing no one will ever go to downtown #Fresno, right? pic.twitter.com/qjp3iUs0f6

Love them all, but I favor the home and third kit the most. Can't wait to grab me one of them soon and represent my hometown!