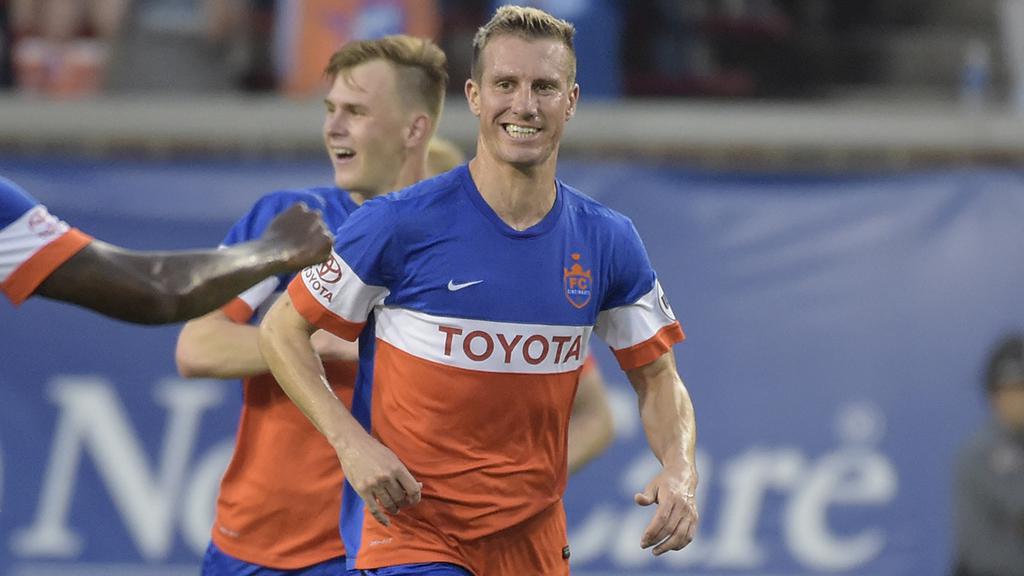 CINCINNATI – The offseason can be long for players, but for FC Cincinnati’s Corben Bone the past few months have been spent enjoying his new role: Dad.

The Bone family welcomed new son Brooks last September 9 as the club was making its run toward the USL Cup Playoffs, but in the first Corben’s Corner of the new year the veteran midfielder spoke about getting used to the new addition to his family, and all that entails.

“All of a sudden ‘the soccer player’ became ‘Brooks’ dad,’” wrote Bone. “The divergent identity that I had been seeking fell into my lap, literally. After only three months of experience I can’t tell you the complete responsibilities or feelings of being a father, but so far, I am convinced that having a child is a miracle.”

Bone and his FCC teammates hit the road for IMG Academy to prepare for the club’s third preseason this weekend, meaning there’ll be a short break in father and son time, but the Texas native is looking forward to getting back home soon.

“I have a new identity to embrace, and while I don’t plan on leaving soccer anytime soon, I feel a change in the way I view myself,” Bone added. “In my eyes I am no longer limited to the beauty of soccer, my identity has expanded into the beauty of life.”

RAPIDS ASCENT?: While major offseason signings grab plenty of headlines when MLS preseason kicks off, there are also those who arrive looking to earn their chance at earning a place in the top flight as a camp invitee.

Among those working toward that goal currently are Charlotte Independence players Enzo Martinez and Joel Johnson, both of whom have been with the club’s MLS partner the Colorado Rapids since January 22. After sterling 2017 seasons in the USL that helped the club reach the USL Cup Playoffs for a second consecutive season, the players' presence at Rapids camp is an indicator of the strength of the bond between the two clubs.

“Our ability to provide opportunities for players to advance their careers is one of the reasons players come to Charlotte,” Independence Head Coach Mike Jeffries told the club’s website. “Our relationship with Colorado allows the Rapids staff to get to know our players well and give them the opportunity to compete for a spot on the MLS roster in preseason.”

Martinez and Johnson aren’t the only players looking to make their mark in MLS preseason. Another notable is 2017 USL Defender of the Year Sebastien Ibeagha, who is training with New York City FC. Both he and Martinez present a strong case, with Martinez having earned nomination for the USL Most Valuable Player award and All-League First Team selection in both 2016 and 2017.

With new Rapids Head Coach Anthony Hudson looking to build a squad ahead of his first season at Dick’s Sporting Goods Park, the door certainly appears open, but Martinez himself isn’t concerned with anything other that performing well as he begins preparation for wherever this season may take him.

“I don't like to focus on things I can't control,” said Martinez. “Early on in my career, I did. I focused on things I didn't have control of or things that actually did more damage, than what helped. Being older and more mature, that's something I've learned and I feel like I stick by it. Not just in soccer, but in every aspect of life.”

FINDING THEIR FEET: Nashville SC had a busy offseason building its squad for the club’s inaugural professional season, so there was a sense of relief for Head Coach Gary Smith almost a year after his appointment as he put the group through its paces this week as the club prepares for its inaugural preseason clash with Atlanta United on Feb. 10 at First Tennessee Park.

“It feels wonderful to be out here,” Smith told the club’s website. “We have been waiting for this opportunity. There have been plenty of meetings and greetings and build up to this. Now we can begin to feel like a group.”

With the mix of experience and young talent the club has brought together there are some serious expectations going into the preseason. According to Smith, so far is has looked like the club’s attacking core has been a little ahead of the game in terms of preparation.

“You’ll always find that the more creative players are the ones who don’t lose their first touch, their balance or their ability to move with the ball,” said Smith. “It’s normally the defenders that look a little bit heavier-legged and maybe giving the ball away a little bit more. We have seven weeks. In seven weeks I expect everyone to be in great shape.”

FAST AND FURIOUS: Anyone who saw Nikola Popovic’s Swope Park Rangers side a season ago would have come away impressed with the level of fitness and pressure the side brought in aiming to dictate the pace of a game.

Now leading Ottawa Fury FC, Popovic has wasted no time this preseason in getting his new squad up to speed as the club looks for a move up the Eastern Conference standings in 2018.

“This first stage is very important for us to understand what we have, as the model that we’ll play will be very demanding,” Popovic told the club’s website as Fury FC opened training camp. “It’s about possession and high pressure, so we’ll have to be very careful in building this team. What I want everyone to know is that we’ll have a style that will be pleasant – for our players to play, and for the fans in the stands. We want the Ottawa Fury to have a style that’s fun to watch.”

The enthusiasm surrounding the club getting back into action has been notable for both returning players and newcomers. After an offseason that has brought some notable names to TD Place, including Canadian internationals Nana Attakora and Maxim Tissot and veteran defender Colin Falvey, the squad has quickly bought in to Popovic’s approach.

“I got a good chance to meet with Nikola one-on-one, he went over his philosophy and his mindset, and they align perfectly with me as a dynamic attacking player,” said Fury FC stalwart Carl Haworth. “I think it suits me perfectly. It’s been very positive so far.”