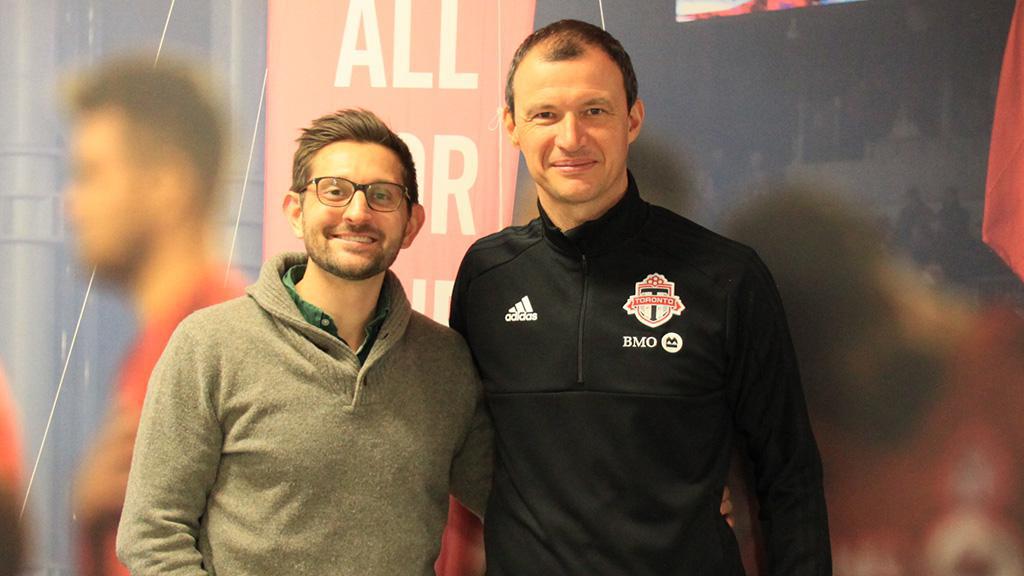 TORONTO – Toronto FC II announced Friday that Laurent Guyot has been named as the club’s new Head Coach. Guyot who has served as the club’s academy director since 2015 will also continue in that role. In addition, Anthony Capotosto, who has been a coaching within the Toronto FC Academy since 2009, has been promoted to Assistant Academy Director.

“We are very excited to announce these promotions today as we continue to build on our success and evolve as a club from the Academy through to the First Team,” said Toronto FC Sr. Vice-President, Soccer Operations & General Manager Tim Bezbatchenko. “I would like to thank Jason [Bent] for his work as TFC II head coach the last three seasons. Jason will transition into a position on Greg’s staff and be a great fit with the First Team.

“Laurent’s extensive experience as a player, coach and academy director both in France and the past three years at Toronto FC as Academy Director makes him a great fit for what we are trying to accomplish with our club, to be consistent contenders and continue to develop homegrown Canadian talent. I’d like to congratulate Laurent and Anthony Capotosto who both earn these well-deserved promotions and increase in their responsibilities.”

Guyot joined Toronto FC on June 29, 2015 after serving as the head coach for the U-16 and U-17 French National Teams. In addition to his duties as head coach, Guyot served as an instructor with the French Football Federation (FFF), teaching both the youth pro license and pro license coaching programs. He is one of few coaches to hold both his Youth Coaching License which he earned in 2005 and his Professional Coaching License which he earned in 2008.

Guyot began his coaching career in July 2002 as a youth coach with French club, FC Nantes. It was there he coached the U-15, U-18 and reserve side over the course of seven years. In January 2005, Guyot was named academy director of FC Nantes in addition to his coaching duties. He held both the position of academy director and coach until his departure in June 2009. From there, Guyot was named head coach of French Ligue 1 club, US Boulogne in July 2009 where he remained until December 2010. He took over as head coach of French club, CS Sedan Ardennes in July 2011 and remained with the club for two seasons. He joined the FFF as the head coach of the U-17 team in July 2013.

“These promotions will help establish a fluidity and culture of excellence between the movement of players as a talented generation of players is starting to push up the ranks,” said Toronto FC Head Coach & Technical Director Greg Vanney. “We have a very talented and capable group of coaches throughout our club and we’re all looking forward to watching our complete player pathway produce more Canadian talent at Toronto FC.”

Capotosto is entering his eighth season with the academy. His previously coached both the U-15 and U-16 teams as well as assisting with other age groups. Capotosto holds a Canadian National ‘B’ coaching licence and United States Soccer Federation National ‘B’ and ‘Y’ licences. He also holds the Elite French Coaching Licence (EFCL) through the French Football Federation and Major League Soccer.

With the change, Jason Bent has re-joined the First Team as an assistant coach. Prior to taking over as TFC II head coach, Bent spent four seasons as an assistant with Toronto FC. Chris Pozniak (assistant) and Phil Boerger (goalkeeping) will remain on Guyot’s coaching staff. Michael Rabasca (director of high performance) will work closely with TFC II and Guyot this upcoming season.