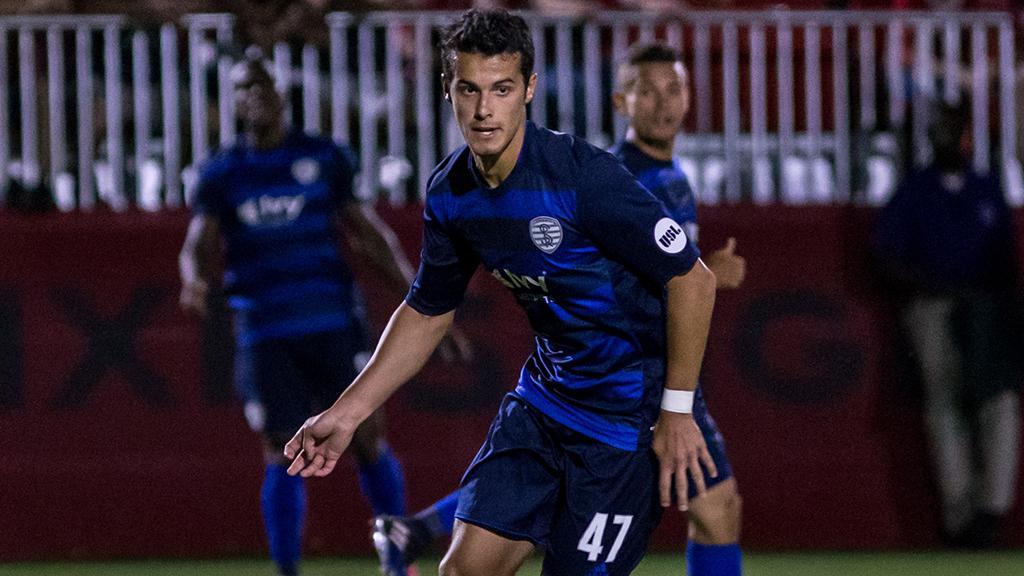 RENO, Nev. – Reno 1868 FC announced on Friday the club had signed Canadian U23 international Mark Anthony Gonzalez for the 2018 season, sending the two-time USL Western Conference champion west for the new season. The signing is pending league and federation approval.

Gonzalez spent the past two seasons with the Swope Park Rangers, where he was named the club’s Offensive Player of the Year in 2016 after scoring 12 goals in the club’s inaugural year. Gonzalez scored 17 goals in 50 overall appearances for the Rangers, and should be a versatile addition to 1868 FC’s attack.

“Mark is a promising young player that has already proven he can score a lot of goals in the USL,” said Reno Head Coach Ian Russell. “He possesses speed and is a very good finisher in the box.”

Gonzalez’s play with the Rangers last year earned him selection to the Canada U23 National Team for a three-team international tournament that saw the side that also contained Louisville City FC’s Mark-Anthony Kaye and Swope Park defender Amer Didic take victories against both Uzbekistan and Qatar.

Prior to joining the Rangers, Gonzalez competed collegiately for the University of Evansville, where he scored 27 goals.

Van Oekel arrives from Real Salt Lake, where he made five appearances in the 2017 MLS season for the club, and one on loan in the USL with Real Monarchs SLC, a 2-2 draw with the Swope Park Rangers. The 31-year-old had previously played for both FC Edmonton and Minnesota United FC, earning a Golden Glove award in 2016 with the Eddies as he posted a 0.55 goals-against average and 85.6 save percentage and 16 shutouts.

“I am thrilled to be able to strengthen our team by adding a goalkeeper of the quality and experience of Matt Van Oekel,” said Energy FC Head Coach Steve Cooke. “Matt has shown over his career he is a top-class goalkeeper and has shown a consistency that is vital to any squad with the goal of challenging the best in the league. Not only is Matt an accomplished player, but he shows character traits necessary to be a leader of our group.

“With the addition of Matt, I’m convinced we can challenge for trophies this season.”

VILLARREAL HEADS TO SACRAMENTO: Jaime Villarreal will be on the other end of one of the stronger rivalries in the USL in the 2018 season after signing with Sacramento Republic FC. A former standout for the LA Galaxy II, who earned an MLS contract with the Galaxy prior to the 2017 season, Villarreal made more than 70 appearances for Los Dos after coming through the club’s Academy system.

“Jaime is another talented young player with a great pedigree of experience from his time at the LA Galaxy Academy and MLS professional experience,” said Republic FC Head Coach and Technical Director Paul Buckle. “He fits in well to our roster moves for 2018 as we look to sign more young talent; players in which we can maximize their potential and develop for the long term.”

Villarreal previously made his mark in the rivalry between Republic FC and Los Dos in 2015, when he scored his first professional goal in the Galaxy II’s victory at Papa Murphy’s Park on July 11, the contest that marked Preki’s final game as Head Coach in Sacramento.

PULISIC ADDED TO PITTSBURGH STAFF: The Pittsburgh Riverhounds announced that Mark Pulisic had been added to Head Coach Bob Lilley’s coaching staff, keeping the duo together after their previous success with the Rochester Rhinos.

Pulisic and Lilley were teammates at George Mason University in college. The two had previously competed and worked alongside each other at the Harrisburg Heat and Detroit Ignition. Pulisic also worked as an assistant coach to Bill Becher in the inaugural season of the Harrisburg City Islanders in 2004, and more recently relocated to Germany after his son, U.S. Men’s international Christian Pulisic, was signed by Borussia Dortmund in 2015, where he was also hired to work with the club’s academy. Pulisic returned to the U.S. last year, reuniting with Lilley in Rochester.

“After entertaining a few other coaching opportunities for the upcoming season, knowing what Bob brings to a club, and deciding where I would feel most comfortable, Pittsburgh seems like the perfect fit,” Pulisic said. “I look forward to helping the Riverhounds find success in 2018, as Bob and I strive to bring a championship to the city.”

SILVA SIGNS WITH SWOPE PARK: The Swope Park Rangers added Matheus Silva to their backline, with the former San Jose Earthquakes defender bring prior USL experience in both Phoenix and Reno to his new side.

The 21-year-old Brazilian made 16 appearances for Phoenix Rising FC in the 2016 USL season on loan from the Quakes, and then appeared twice for Reno 1868 FC last season before a midseason swimming accident in Lake Tahoe left Silva hospitalized and in a coma. He made a full recovery, however, and is ready for the new season with the defending Western Conference champion.

LOS DOS INK AMAYA: The LA Galaxy II signed forward Adonis Amaya to a new contract that will keep the former academy standout with the club for a fourth season. Amaya has made 48 appearances for Los Dos since the start of the 2015 USL season, scoring five goals and seven assists for the club.