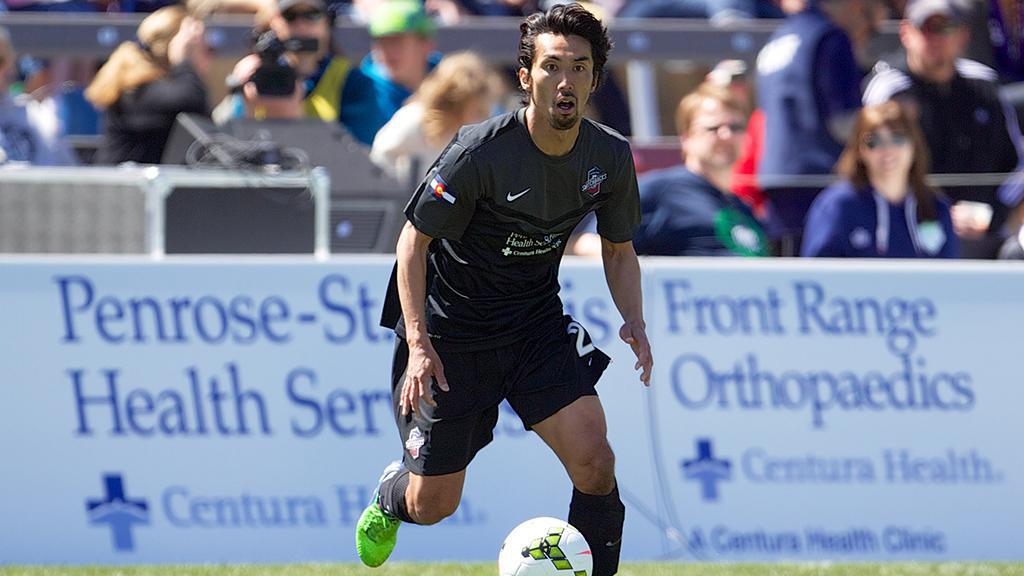 After spending 10 seasons in the USL, and making almost 200 appearances, Japanese standout Shintaro Harada brought his playing career to an end this year. Now, instead of bringing his industriousness to the center of the field for such clubs are the Pittsburgh Riverhounds and Colorado Springs Switchbacks FC, he’s doing the same as part of the front office for the J.1 League’s FC Tokyo.

We caught up with Harada to look back on his career in the United States, and how he’s enjoying working for a top-flight club in his home country.

USL: You’ve retired from playing, but have remained in the game with the J1 League’s FC Tokyo this year, what has it been like getting used to working in the front office of the club instead of being out on the field?

Shintaro Harada: I really hit the ground running from the moment I arrived at FC Tokyo. From very first day that I came to FC Tokyo's Office, I’ve been working on player contracts, going overseas to Thailand to bring a foreign player coming in to FC Tokyo, and watching and assessing the games, scouting. As soon as I arrived back in Japan, I started working. That was good thing for me.

USL: You’re working in analysis, player scouting and helping as a translator in your position with FC Tokyo, what’s the day-to-day routine like for you now at the club?

SH: My routine changes, which depends on whether we’re in-season or not. Now it's the offseason, I am making a lot contracts of players and joining the meetings to build the squad for next season, preparing for next season. During the season, I was watching training every day, watching the games on the weekend, analyze and make my observations to the coaching staff on what I saw from the game. I personally talk to the players about the game as well, and hopefully pass on some of my experiences that can help their progression. I also pass on match data to the coaching staffs, director and General Manager.

USL: The last time we saw you was on the field for Colorado Springs Switchbacks FC in 2016, when did you decide your playing days were coming to an end?

SH: I personally hadn't felt that the end of my career was coming. I was going keep playing 10 more years! I was healthy, I still am, and was still motivated to keep playing soccer, but when I got the offer of this job from FC Tokyo, I thought that this job would be so worthwhile for me and wanted to be part of this club and have a chance to help it win the J.League championship. That is why I could transition to this new path, remaining in the game. I really wanted to work for the great fans we have that support FC Tokyo. 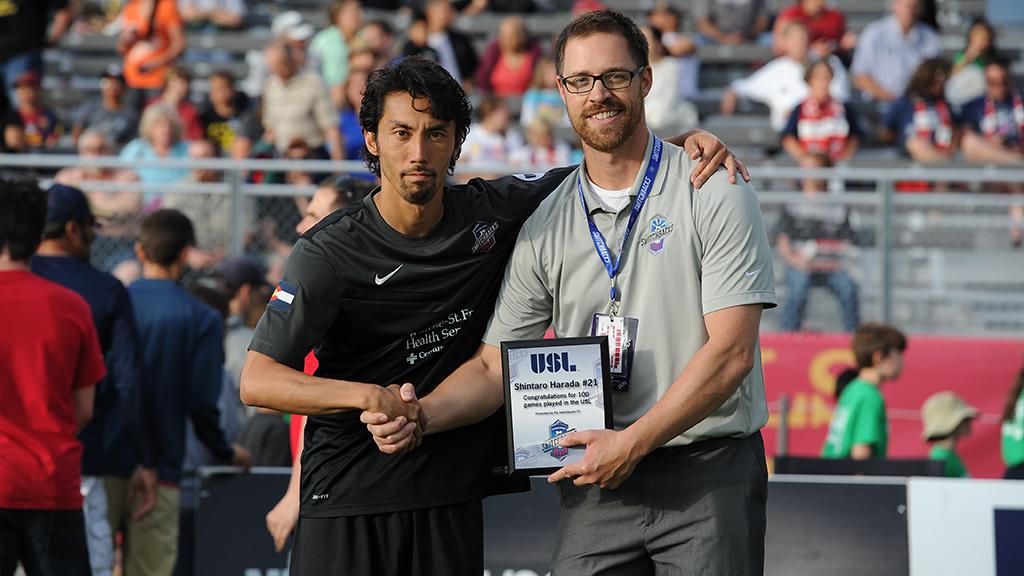 USL: You played for 10 seasons in the United States, what was your main motivation behind making the move to the U.S. before the 2007 season?

SH: I wanted to go overseas to play soccer from when I was little. Especially to Europe. But I don't even know why I came to US first. That was strong intuition, which made me come to the States. God told me go to the States, so I was led and just followed that decision.

USL: With the clubs you played for, including the Pittsburgh Riverhounds and the Switchbacks, you got to see the evolution of the USL first-hand, what was it like to see the league grow over your years in the league?

SH: I competed in the USL for 10 seasons and I saw many, many changes and growth in the league. The skill level and tactical level on the field have been going up year by year. But most importantly, a lot of good coaches with passion and ambition led the teams. Especially young coaches are really passionate and motivated to coach the players, which is really good for the teams. I really think that Switchbacks Head Coach Steve Trittschuh was good coach to play for.

USL: You made almost 200 league appearances in your time in the United States. What were the most enjoyable moments of your career in the USL?

SH: The most enjoyable time was when I talked and shared about football with many players from many nationalities. Of course, I enjoyed reaching the landmark of playing in more than 200 games, and the enjoyment of claiming some individual trophies, like my Defender of the Year award in 2010 with the Riverhounds. But when I talked and shared about football with coaches and players, that was the most enjoyable moment, because I came to the States to learn soccer. I could learn so many perspectives of soccer from many nationalities, which has been my treasure. 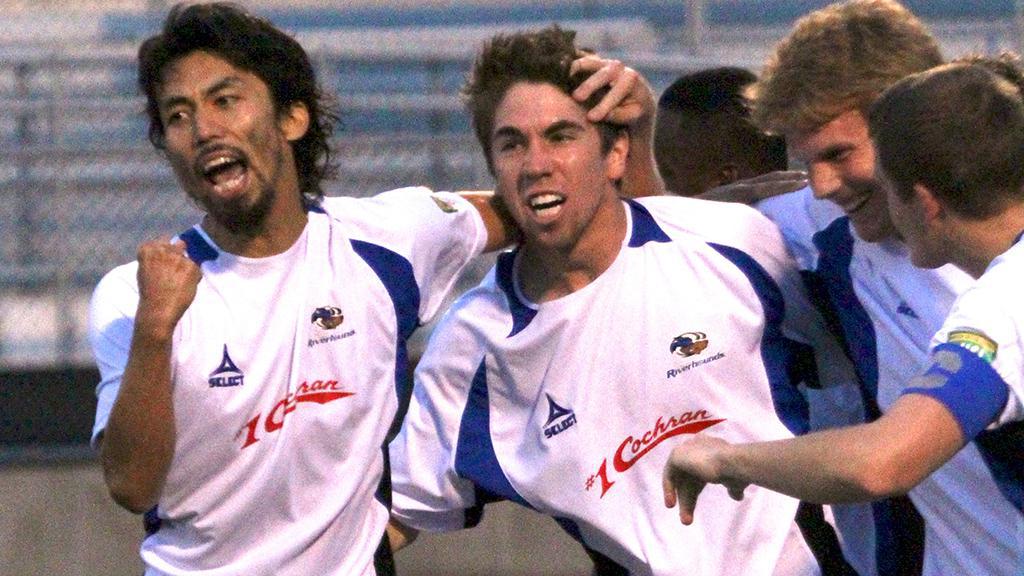 USL: How do you hope fans remember you as a player?

SH: I really, really thank the fans in USL, to even away supporters, but I remembered Switchbacks fans the most. I had great relationship with them and they always gave me warm support. Of course, I remembered Riverhounds supporters as well, they were great on me as well. I hope they remember me as a player who fought hard for the teams, not for myself. I showed them fighting spirit and guts, which come from a strong Japanese mentality. Japanese players can sacrifice ourselves. I was the one who can be the fire in the game. I hope good young talents do not be shy and play with the fighting spirit.

USL: The 2017 J.1 League season recently came to a close, what have you learned from your first year with FC Tokyo?

SH: I have been in Tokyo about for six months, but I have already learned so many things from my time with FC Tokyo. I didn't only learn things on the pitch, also learned so many things behind the scenes, for example player transfers, management, office work, administration and so on. Thankfully, I have been able to work under the directors and General Manager of FC Tokyo. Everything that I have seen was very new, and I’m enjoyed getting the learn a lot about all of the off-field work and activity that is such a big part of soccer, too.

USL: Where do you see your future in the game, five or ten years from now?

SH: I don't know where I am going to be. But I'm 100-percent sure that I would be going to where my will would be. My passion and ambition for soccer are getting much bigger and bigger, even now that I’ve hung up my boots. I don't want to think too far ahead, just do the best that I can do for FC Tokyo to win a  championship. I really want to stay here with FC Tokyo, and be part of the club when it achieves something great.