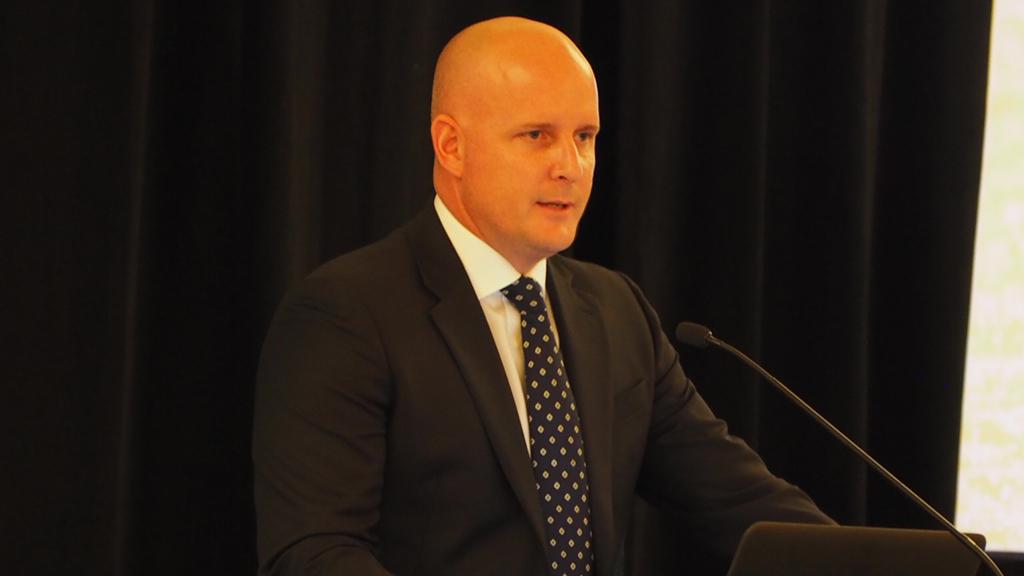 TAMPA, Fla. – Having become part of the USL’s leadership midway through the 2013 season, current President Jake Edwards has seen, and in many ways presided over the evolution of the league’s Winter Summit.

After this week’s event, which saw almost 500 league and team representatives assemble in downtown Tampa for the biggest Summit in the league’s history, the difference between where the USL was four years ago and where it now stands in the North American soccer landscape is marked.

“When I stand in front of the Board of Governors and we’ve got 80 people in the room, it’s a different room than it was three, four, five years ago,” said Edwards this week. “Different objectives, different capabilities, and it’s very exciting to see some of the initiatives we’re working on and see the enthusiasm and hunger of our teams and ownership to do more. They want to invest, they want to have stadiums, they want to have new commercial programs, they want to do all the right things that we want to do as a league.”

Certainly, 2017 will go down as a landmark season for the league. From surpassing two million total attendance for the first time in the regular season – a first for the Division II level in North America – and the opening of new venues, plus the promise of more to come, the USL’s visibility on the national level has never been higher.

For Edwards, the work that has been done since his arrival both within the league office and by club ownership has provided the platform for everything the USL has become, and what it will be in the future.

“We’ve got a phenomenal staff at the league office, a tremendous group of sports executives that come to work every day to push this league forward and push this sport forward,” said Edwards. “We’ve got a great team at the USL, and across the league a fantastic group of clubs, and they’ve helped to put a business model together that keeps attracting new ownership through investing in new stadiums. We’ve got new commercial and media partners coming into the league now, and we’re growing.” 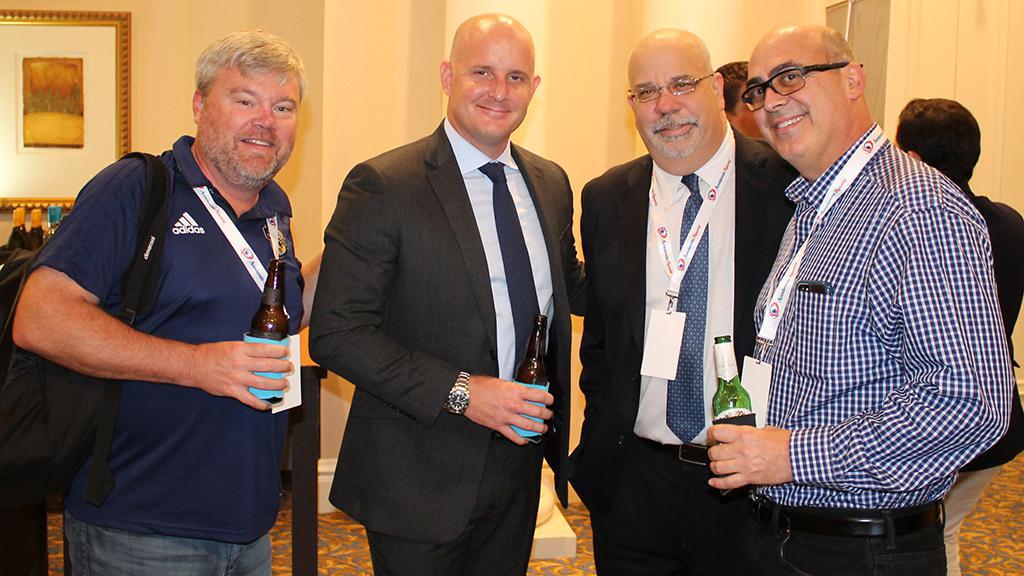 That growth isn’t only being seen in the new additions that have pushed the league past 30 teams for the 2018 season, but also in the partnerships and programs the league and its teams have instituted that have allowed revenues to grow on a league-wide basis. Edwards said there will be some new media and commercial partners coming in for 2018, and the league will be launching a new licensing and sponsorship program.

On top of that, the work that has gone into building a solid foundation for the launch of the USL’s Division III league in the 2019 season will become more visible in the new year, and with it the potential for even greater alignment in vision between the two professional divisions and the PDL.

“What I’m most looking forward to, really, is the work we’re going to be doing around the realignment of the league, creating the pyramid structure that we have,” said Edwards. “The restructuring of the brand, the restructuring of the architecture of the divisions, and some of the programs we’ll be able to work on to integrate the divisions is very exciting, and it’s a key component to our strategic plan, our long-term plan, to create a pyramid structure and give players an opportunity to move through the divisions.”

That type of player movement has already been seen through the likes of Tyler Adams, who last month made his debut for the U.S. Men’s National Team only two years after being the first signing in New York Red Bulls II history and a year ago winning USL Cup. Saturday’s MLS Cup also saw Toronto FC’s Alex Bono help his side claim victory after having begun his career on loan in the USL after proving himself as a top prospect with Reading United AC in the PDL.

Raising the level of those platforms will come through greater investment, as will ensuring the league’s quality of play continues to rise year on year. With more than 50 players with USL experience having competed in World Cup Qualifying around the world since the start of 2016 and the 2017 CONCACAF Gold Cup, the league’s visibility is making it a more and more attractive option for those looking for a bigger spotlight. Edwards wants to make sure players are getting the resources and facilities that will continue that, while ensuring the long-term sustainability of the league and its clubs.

“As we get healthier and healthier revenues – and our revenues are now starting to get quite significant at the clubs – if we can start reinvesting that into the team side and into the facilities as well, it’s important that we reinvest into that side in line with revenues, in a sensible way,” said Edwards. “Our owners are firmly committed to that, but they’re also firmly committed to not only building solid businesses, but also a football culture in each club, whereby we focus on the quality of the players, we focus on the quality of the environment we put the players in, whether that’s the training facility, the stadiums they play in, the hotels they stay in and the transportation they use for games, all of those little details that are so important to making a professional football club work, and attracting those type of players.

“We’ve seen players coming from all over the world now, more than 70 countries represented in our league. That’s telling you the USL is getting exposure around the world, and players know about this league and want to come into this league.” 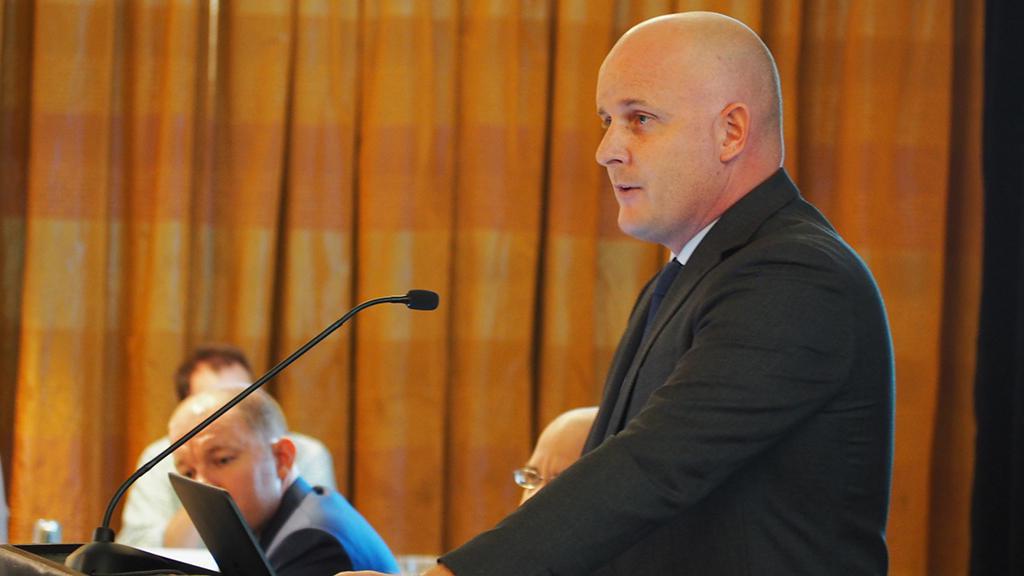 Having overseen the league’s remarkable growth both on and off the field since becoming the USL’s President in 2015, Edwards has plenty to look forward to moving forward. He’s excited to see what the league’s newcomers – Nashville SC, Fresno FC, Las Vegas Lights FC, North Carolina FC and Atlanta – will bring to an exciting group of new markets and the league overall, and how they’ll fare against the high level of competition on the field that was evident in the past season.

Then there’s the fact that the league itself is entering a key period both in its efforts to build infrastructure at a club level, and the league’s wider growth that will see new markets announced in the upcoming year for the 2019 season and beyond. Add in the addition of a new division, and everything that will bring to the next two years of the league’s history, and Edwards arrives at his office every day enthused for what the future will hold for the league, and him personally.

“I’m having lots of fun, and I’ve got to say it’s a pleasure not just to work with the great staff at the league office – we’ve got over 50 staff now, and they make my job a lot easier – and to see the enthusiasm and the commitment of the folks I work with, that gives me great pleasure, that my work environment is exciting,” said Edwards. “It’s a lot of fun to be part of I think a very important, and transformative and historic period in the game in this country where we’re moving into an unprecedented period of growth and support for the game at all levels. To be part of that history, in building something that we know will be here for decades to come, that will be sustainable, is very exciting.”

That enthusiasm is clearly shared by all who were on hand this past week in Florida.

“It’s a phenomenal event, and a great opportunity for us to get some world-class speakers to run some of the breakout sessions, and an opportunity to do a lot of sharing of best-practices among the teams and really, most important, the ability to get everybody under one roof and for those executives to network and socialize with their counterparts at other clubs, and share what’s going well and what’s going on in different parts of the country,” said Edwards. “The sentiment of all the executives here is they’re so hungry and they’re so excited, they’re ready to get going for 2018.”