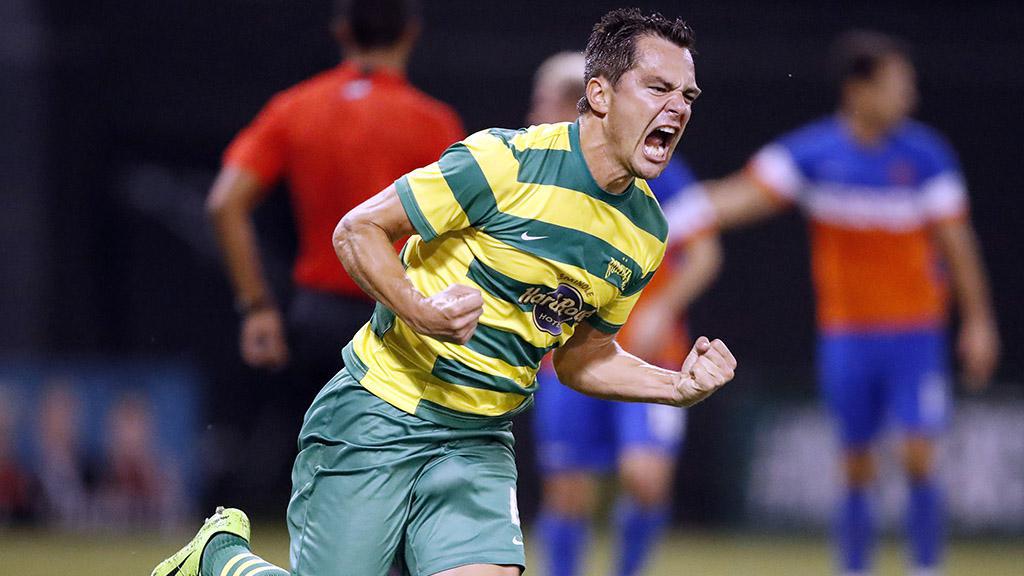 ST. PETERSBURG, Fla. – Marcel Schäfer scored a pair of goals to lead the No. 3-seed Tampa Bay Rowdies to a 3-0 victory against the No. 6-seed FC Cincinnati in front of 6,104 fans at Al Lang Stadium on Saturday night in the Eastern Conference Quarterfinals of the 2017 USL Cup Playoffs on Saturday night. Tampa Bay took the lead in just the eighth minute as a searching ball into the left channel was controlled by Georgi Hristov, and the Bulgarian found a cutting Marcel Schafer as he moved into the left side of the penalty area to shoot low into the right corner. FCC almost answered immediately, only for Jimmy McLaughlin to slide his finish wide of the right post, while Andrew Wiedeman also had a good long-range drive go wide of the right post in the 22nd minute. Three minutes later, however, and Schäfer struck again. A challenge 25 yards out sent the ball to the feet of the former German international, and his low strike from the left channel picked out the right corner. Schäfer almost added a third early in the second half, his low shot to the right corner turned aside by FCC goalkeeper Mitch Hildebrandt, but in the 67th minute it was Hristov’s turn to strike as his curling shot from 25 yards hit the underside of the crossbar and went just over the line to make it three for the hosts. Cincinnati almost pulled a goal back with 12 minutes to go as a corner kick from the came to Kadeem Dacres, but Rowdies goalkeeper Matt Pickens recovered in time to tip his header over the crossbar, and from there the Rowdies closed out a comfortable first USL Cup Playoffs victory.

Marcel Schäfer, Tampa Bay Rowdies – Schäfer was again exceptional, and produced two excellent goals to give the Rowdies a lead they never looked in danger of relinquishing.