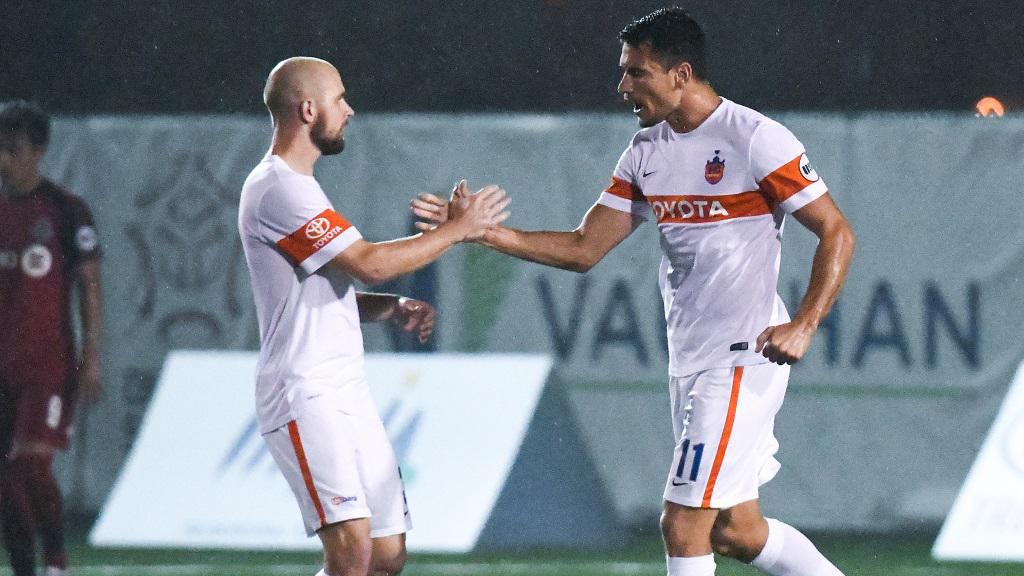 VAUGHAN, Ont. – FC Cincinnati rallied for a 4-3 victory against Toronto FC II on Saturday night at the Ontario Soccer Centre that left it looking at either the sixth or seventh seed in the Eastern Conference for the 2017 USL Cup Playoffs. In heavy rain, Toronto took the lead in the 10th minute as an initial cross was headed on goal by Ben Spencer and saved by FCC goalkeeper Mitch Hildebrandt, but Tsubasa Endoh followed up to put home the rebound into the open goal. Endoh struck again in the 31st minute as Hildebrandt was caught by a deep cross that saw Spencer knock back to the attacking midfielder to hit a shot that deflected off a defender and into the back of the net. Cincinnati pulled a goal back 10 minutes later as Danni König headed home a free kick by Kenney Walker, and Djiby Fall almost equalized two minutes later as his volleyed finish hit the right post and came out. König had a chance come back off the crossbar two minutes into the second half, with the rebound hustled behind by Toronto’s defense as Fall looked for the rebound. Walker provided the leveler in the 49th minute, however, as a layoff by Corben Bone opened a chance to fire low into the right corner from 25 yards. Toronto regained the lead just four minutes later as a perfect ball over the top by Brandon Onkony played in Shaan Hundal, and the Canadian U20 international produced a lobbed finish over Hidebrandt, who arrived late coming off his line. FCC got level again in the 66th minute when Jimmy McLaughlin broke on a counterattack down the left, and his low cross was knocked home at the top of the six-yard area by Fall to make it 3-3. Cincinnati then took the lead for the first time with four minutes to go to grab all three points, with Walker’s chipped through-ball clipping off the head of a defender before finding its way to Justin Hoyte, who finished calmly. Cincinnati almost added a fifth in stoppage time, only for Toronto goalkeeper Mark Pais to make a good diving save to deny Kadeem Dacres, but FCC held on to end its regular season on a hard-fought win.

Kenney Walker, FC Cincinnati – Returning to the lineup, Walker recorded a goal and assist, and also set up the game-winning goal in another display that highlighted his value to the side.