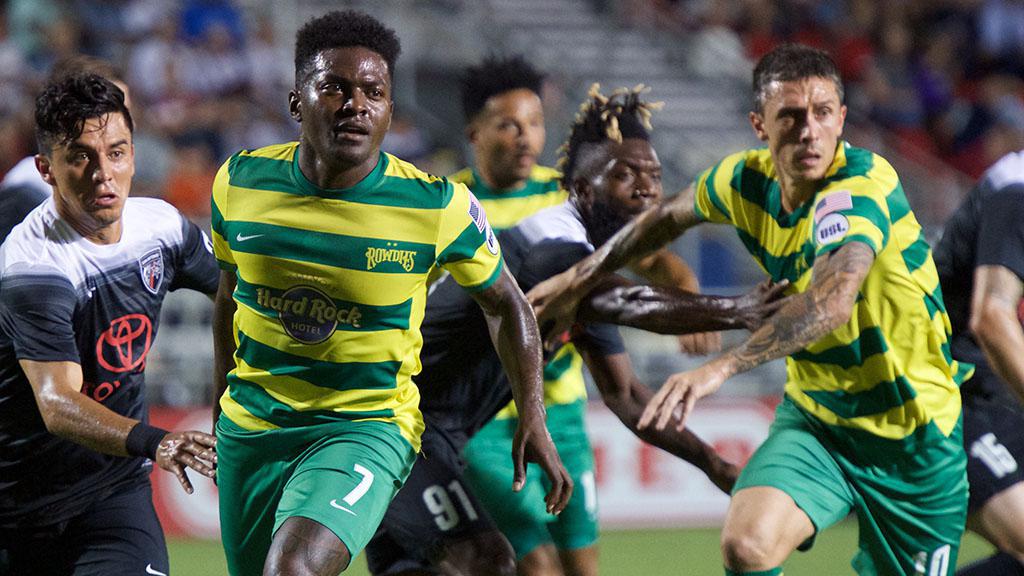 SAN ANTONIO – San Antonio FC scored with two minutes to go as it grabbed a late 1-1 draw against the Tampa Bay Rowdies on Saturday night at Toyota Field. Tampa Bay threatened early as Martin Paterson put a low shot on goal that forced a save by Diego Restrepo from the right side of the penalty area. San Antonio’s first chance came on an indirect free kick off a backpass by the Rowdies, but the visitors emerged unscathed, and the Darwin Jones forced another good low save from Restrepo by the left post in the 13th minute. San Antonio’s Omar Gordon proved dangerous for the hosts, and forced a low save by Matt Pickens in the 24th minute, and the Jamaican went close again in the final minute of the first half as Pickens punched his long-range drive away to safety. The Rowdies threatened again in the 64th minute as Marcel Schäfer’s corner kick from the left was headed on target by Tam Mkandawire, only for Restrepo to save, while Jones flashed a shot high for the visitors a few minutes later. Tampa Bay found the breakthrough in the 69th minute, however, as a cushioned header by Walter Restrepo laid on a sharp finish by Georgi Hristov from 12 yards. San Antonio almost hit back immediately as Cesar Elizondo sent a good chance wide of the right post from the center of the penalty area, and San Antonio had a late chance through Gordon after a good low cross by Billy Forbes from the left found the Jamaican, only for his finish to go well high. But San Antonio grabbed its late equalizer with two minutes to go as a low cross by Forbes made it all the way through the six-yard area and let Ever Guzman finish at the back post to leave honors even in the interconference clash.

Billy Forbes, San Antonio FC – Forbes looked like he would be the player to create the chance as SAFC pushed for an equalizer in the final 20 minutes, and managed to do so as his low cross gave Ever Guzman the chance to level in the 88th minute.