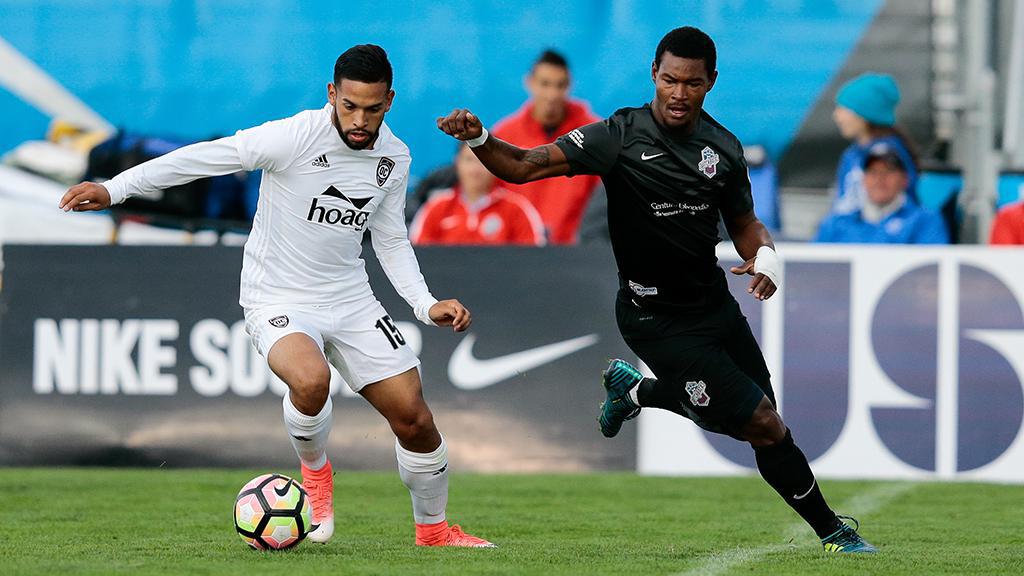 COLORADO SPRINGS, Colo. – Colorado Springs Switchbacks FC kept its hopes of a place in the USL Cup Playoffs alive with a 2-1 victory against Orange County SC on Saturday night at Weidner Field. Orange County threatened more consistently early, and Jerry van Ewijk forced a near-post save by Switchbacks goalkeeper Dan Jackson with a shot from the right side of the penalty area in the 16th minute. The Switchbacks took the lead in the 22nd minute, however, as Taesong Kim put home a powerful header from Masta Kacher’s corner kick from the right. Four minutes later Luke Vercollone fired just wide of the left post after Kim won possession in the OCSC half, but Kevaughn Frater notched his ninth goal of the season with a low finish on a breakaway in the 28th minute to double Colorado Springs’ lead. Orange County got the chance to pull a goal back a minute before halftime as Victor Pineda was brought down for a penalty kick, but Van Ewijk shot over the crossbar to keep the deficit at two. OCSC halved that deficit 10 minutes into the second half, however, as Irvin Parra headed home Rodrigo Pacheco’s cross from the right. Colorado Springs almost responded immediately, but Vercollone’s shot went high after a good cut-back by A.J. Ajeakwa, and OCSC’s Walker Hume almost leveled in the 68th minute with a header from a corner. Orange County goalkeeper Charlie Lyon made a pair of standout saves to keep his side in the game as a pair of efforts by Frater with 18 minutes were turned away, and two minutes later Pineda hit the crossbar with a close-range header for Orange County. The Switchbacks thought it had added an insurance goal through Ajeakwa with six minutes to go, only for the offside flag to be raised, and Kacher hit the crossbar in the 90th minute on a counterattack with a curling effort, but the late missed opportunities didn't come back to bite the hosts as they held on in stoppage time to earn victory.