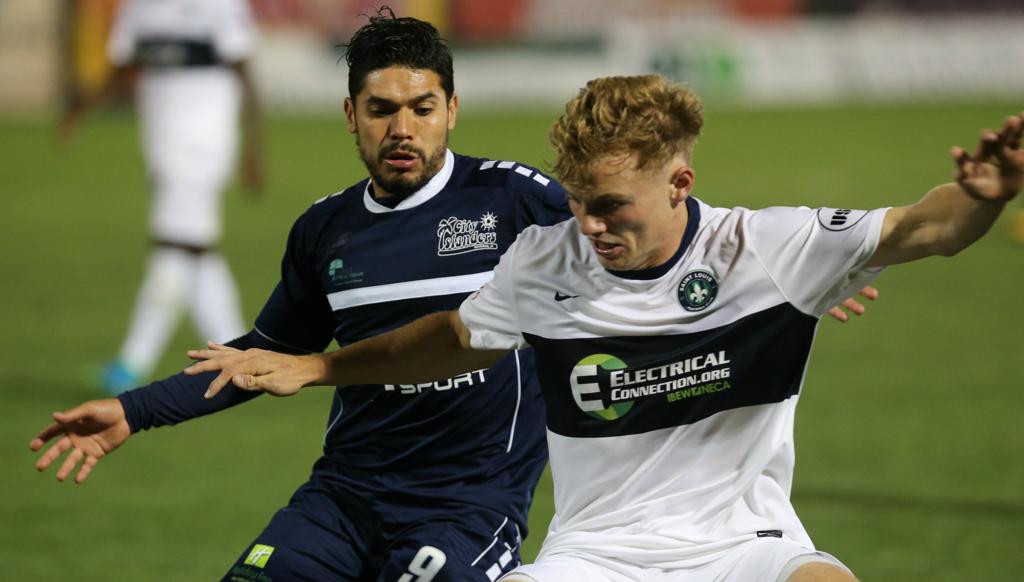 HARRISBURG, Pa. – The Harrisburg City Islanders closed out the home portion of their 2017 schedule in emphatic fashion on Saturday, recording a 2-0 victory over Saint Louis FC at FNB Field. The City Islanders were on the front foot from the outset and needed less than four minutes to open the scoring as an in-swinging corner from Abass Mohammed – who was recently called up to the Ghanaian National Team – found the head of Manolo Sanchez who headed it home from in close. Sanchez nearly grabbed another off a pass from Jonny Mendoza five minutes later, but his header flashed over the bar. Saint Louis was outshot 9-1 in the first half but attempted to right the ship coming out of the break. In the 49th minute, a cross in from Seth Rudolph on the left wing landed at the feet of Christian Volesky but his effort rang back off the post before being rendered inconsequential by the assistant referee’s offside decision. Harrisburg maintained control of the run of play down the stretch and in the 75th minute, Mendoza found Ropapa Mensah who finished from a sharp angle, putting the result out of question with his league-leading fifth goal of the month. The City Islanders extend their season-best winning streak to three and improve to 10-14-7 overall (37pts), while Saint Louis FC now stands at 9-13-8 (35pts).

1. The victory was a fitting end to a successful September that saw Bill Becher’s squad take full advantage of a slate that featured five opportunities to play at home in six outings. The City Islanders previously knocked off Saint Louis in their only road outing of the month and with the win in the home finale, Harrisburg now owns its first five-match unbeaten streak since the early portion of the 2015 season after closing a four-game homestand with a 3-0-1 record. Seemingly an afterthought after being outscored 12-0 while compiling a 0-4-1 record in August, the City Islanders have been one of the league’s hottest teams down the stretch despite having been all but eliminated from playoff contention with just one game remaining on the team’s regular season schedule.

2. The late season surge for the City Islanders has been powered by balance on both sides of the field. While the standout Mensah scored all three goals in consecutive victories over Toronto FC II and Ottawa Fury FC entering the match, Sanchez became the sixth different Harrisburg player to find the back of the net in September. By comparison, prior to September, only six different City Islanders had scored dating back to a Week 10 match at Bethlehem Steel FC – a span of 16 matches. By keeping Saint Louis off the board, Harrisburg has also now recorded consecutive shutouts for just the second time this season while extending its run to five straight games allowing one goal or less behind the platoon of Saturday’s starter Brandon Miller and Sean Lewis in net.

3. The loss leaves Saint Louis FC on the verge of mathematical elimination playoff contention as the side saw its winless streak on the road extended to five games. Saint Louis will be left to rue missed opportunities as it stares up at the playoff line, having recorded just one victory in six matches against conference opponents currently on the outside of the top eight in the standings over the last seven weeks.

Jonny Mendoza, Harrisburg City Islanders – Goal scoring tends to grab headlines, but Mendoza’s distribution has been essential in the uptick for the City Islanders and the Colombian continued to serve a key role against Saint Louis, completing over 90 percent of his passes and providing the assist on the game-sealing tally from Mensah