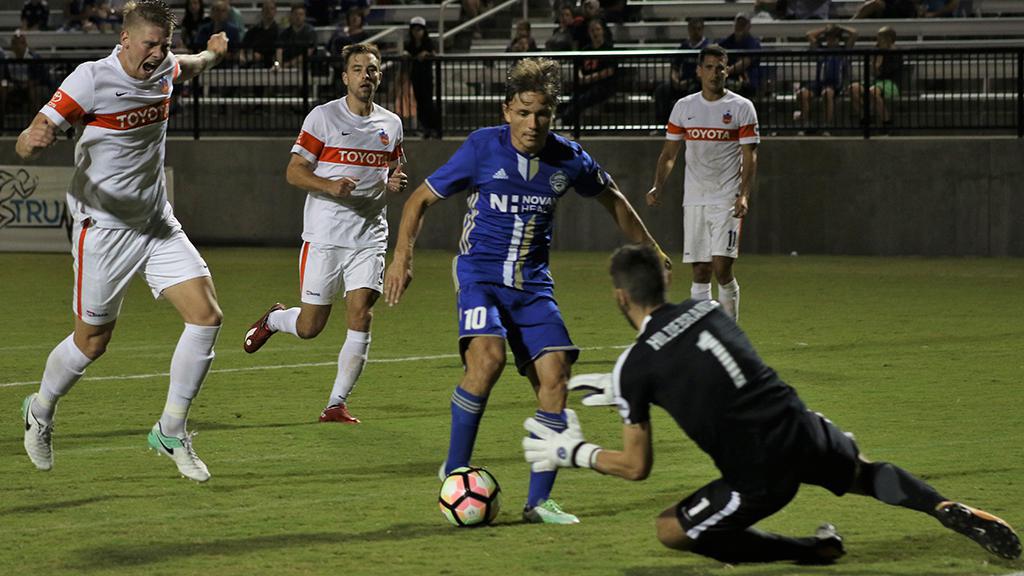 MATTHEWS, N.C. – FC Cincinnati goalkeeper Mitch Hildebrandt saved a stoppage-time penalty kick by Jorge Herrera to preserve a 1-0 victory for FCC at the Sportsplex at Matthews that allowed the visitors to take a big step toward a place in the 2017 USL Cup Playoffs on Friday night. The Independence dominated throughout, and almost struck in the second minute as Enzo Martinez fired a low shot just past the left post from the top of the penalty area. Independence defender Joel Johnson then set up Herrera for a shot that was blocked by FCC defender Austin Berry 10 minutes later, while Johnson fired high soon as the hosts made the early running. Martinez came even closer to putting the Independence ahead as he juked past Hildebrandt in the penalty, only to put his finish wide of the right post. Cincinnati’s Kenney Walker made a massive interception to deny a Martinez breakaway in the 38th minute, while the Independence’s Henry Kalungi had a header in stoppage time saved to keep the game scoreless at the break. Charlotte’s pressure continued in the second half, and the hosts almost took the lead in the 73rd minute as Hildebrandt denied a good chance for Herrera. Cincinnati’s first good chance of the night came with 15 minutes to go as substitute Kevin Schindler broke in one-on-one with Independence goalkeeper Cody Mizell, but has his shot turned wide. From the ensuing corner, though, Fall’s header came to Schindler for a close-range finish to put FCC ahead. Herrera tried to answer for Charlotte from a free kick with 11 minutes to go, only for Hildebrandt to save, and the FCC goalkeeper almost claimed a volleyed finish by Caleb Calvert with two minutes to go. Cincinnati’s Jimmy McLaughlin hit the crossbar from 20 yards a minute later as the visitors almost put the game away, but then Herrera first blazed over, and then had his penalty kick saved by Hildebrandt, both in stoppage time, as Cincinnati held on for a remarkable victory.

Mitch Hildebrandt, FC Cincinnati – Hildebrandt recorded a five-save shutout, including his stoppage-time penalty kick save, to allow Cincinnati the chance to grab a massive win on the road.