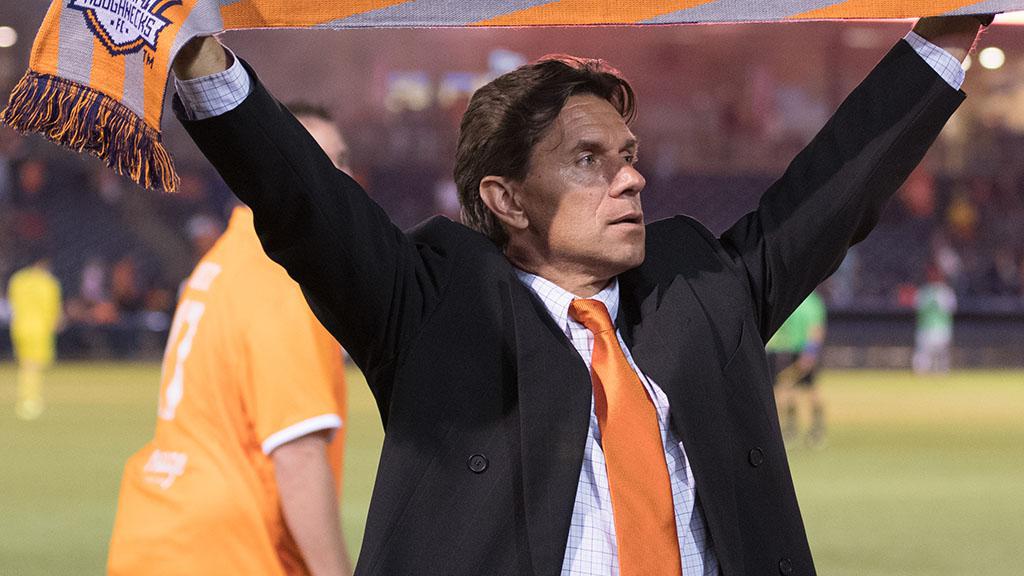 TULSA, Okla. – Coming in to help overhaul a club that had finished with the worst record in the USL in 2016, with the need for a major roster overhaul and fresh set of ideas on how to move the club forward, the task in front of David Vaudreuil when he became Head Coach of Tulsa Roughnecks FC this offseason was – at least to an outsider – a daunting one.

But even back then, as the pieces of the puzzle were starting to come together, the belief was always there for the former MLS Cup-winner that the sort of turnaround that could result in a postseason place was achievable.

“Obviously, at the beginning of December before we’d signed any players, there was always the question,” said Vaudreuil, “but in my mind I’d already talked to the core of the team, guys like Jorge Corrales and [Francisco] Ugarte and Kosuke Kimura and a couple of others guys we’d end up signing. In my mind I was feeling we were already having a little bit of success in convincing guys to come and sign for the team.

“At that point I just thought that I had coached within the league before with the Atlanta Silverbacks, I knew the league well enough and I knew players well enough that I thought it was legitimate to think about making the playoffs in the first year.”

With four games to go in the season, the Roughnecks are only six points away from their first trip to the USL Cup Playoffs, and Vaudreuil is a big reason why. Working alongside David Irving, who moved upstairs to become the Roughnecks’ Technical Director, the contacts Vaudreuil had in soccer circles helped build a compact squad that has been one of the more fun to watch in the USL this season.

While bringing aboard the likes of MLS veteran Kimura was an important step in building the squad’s framework, it was the addition of Argentinian playmaker Juan Pablo Caffa that started to turn some heads as to what was going on in Tulsa. Through a former teammate, an adviser to Caffa, Vaudreuil got his chance to pitch the Roughnecks to the 32-year-old, which brought about a major signing coup.

“He was willing to take a chance,” said Vaudreuil of Caffa. “He’s at that age where he’s still got two or three more good years on him, and he knows the opportunities that are coming through MLS and USL. He was convinced just on the recommendation that we were going to play the type of style that he could fit into and be the featured point of. A lot of possession on the ball, playing the ball to him as much as possible, putting him on every set piece. Immediately when I got in contact with him I did a couple of video conference calls with him, and it seemed to go very well.

“Obviously, it wasn’t a money factor. It wasn’t like we had a six-figure salary to offer him. We stuck within the budget that the Roughnecks had and have had traditionally. It was more about an opportunity for him. I was very excited how quickly we came to an agreement, and he’s been the focal point for us ever since. To have someone of that caliber and experience and technical ability on dead balls and passing the ball, shooting the ball, delivering the ball, it’s been exciting for us, exciting for our fans, and I think he’s made enough of an impression that if we make a good run at the playoffs he still has the legs and still has the determination to play at a higher level.” 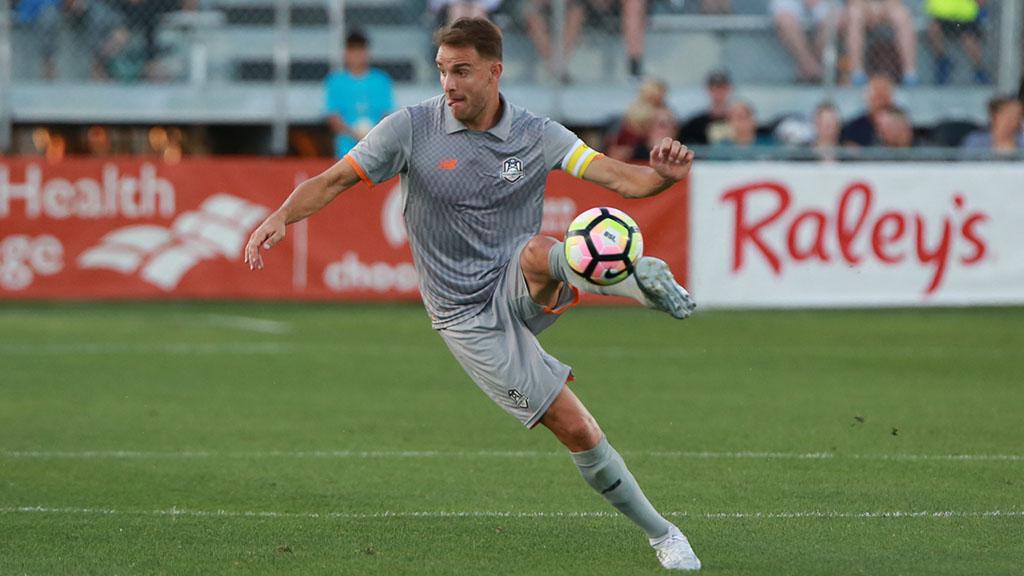 It wasn’t just former teammates that Vaudreuil was able to call upon. A chance to interview for a position with the Chicago Fire’s Nelson Rodriguez when current Head Coach Veljko Paunović was building his staff didn’t pay off with a position immediately, but instead saw the Roughnecks and Fire come together this offseason in a partnership that has brought key players to Tulsa like Joey Calistri and USL 20 Under 20 selection Collin Fernandez.

Rodriguez’s comments earlier this year that Vaudreuil could be someone who becomes a Head Coach in MLS at some point were certainly appreciated by the 50-year-old, but the strong working relationship that the two clubs have shared has been a huge boost to both this season.

“They were very familiar with where my head was at with the game and what my ambitions were, so as soon as I took the Tulsa job we immediately started working on that,” said Vaudreuil. “That was instrumental in our ability to compete, to bring in guys at the level of Collin Fernandez and Joey Calistri, and now bringing in Brandt Bronico, and Jacori Hayes from Dallas, it really gave us a much deeper squad than we would have been able to get with a normal budget, so that’s a big factor in our success. It extended the reach of our budget, and gave us a much deeper talent pool, and you see how much they contribute and how important they are to us.

“I can’t say enough about what the Fire have done for us, and we’ve tried to do the same for them. I think people see at every level how it’s helped both teams. Jorge Corrales has signed for them, and we’re obviously very excited that he’s signed an MLS contract, and we expect to have three or four players on this team that are going to be MLS players [in the future].”

As much success as he’s brought to Tulsa more than a decade after he held his last professional Head Coaching position with the Atlanta Silverbacks in the USL First Division, it also brings a question; in the time between those two positions, where had Vaudreuil been?

The answer, as it turns out, is a simple one.

“It was really timing,” said Vaudreuil. “I had recently gotten married and had a baby while I was in Atlanta, and we moved out to Los Angeles to be part of the Chivas USA organization. Eventually I was with the LA Galaxy with their under-18 team, but it really was that I had sole custody of my 12-year-old son, and when I first got divorced in LA I decided I didn’t want to put him through the wild west of being a professional coach. We had gone home to Connecticut to be with my family for the first time since I’d basically left home for high school and college.”

While there Vaudreuil stayed involved in the game, establishing a youth soccer program not far from the place he grew up. Providing a stable family life for his son was the priority, but while doing that he gradually started to find a way to dip his toes back into the professional waters with the New England Revolution, where he worked as an assistant.

“It worked out well, I was very happy to be part of the Revolution organization and really got my taste for MLS and the pro game again,” said Vaudreuil. “It was soon after that I decided my son was old enough to adjust to a move, and worth our while to go out there and look for a pro coaching job again.”

What added to that desire to return was the manner which the landscape was rapidly changing at all levels in the professional game. A professional player before MLS arrived in 1996 – “I was playing indoors and outdoors every six months,” said Vaudreuil – the new opportunities that were becoming available made it the right time for him to step back into the professional ranks full time. 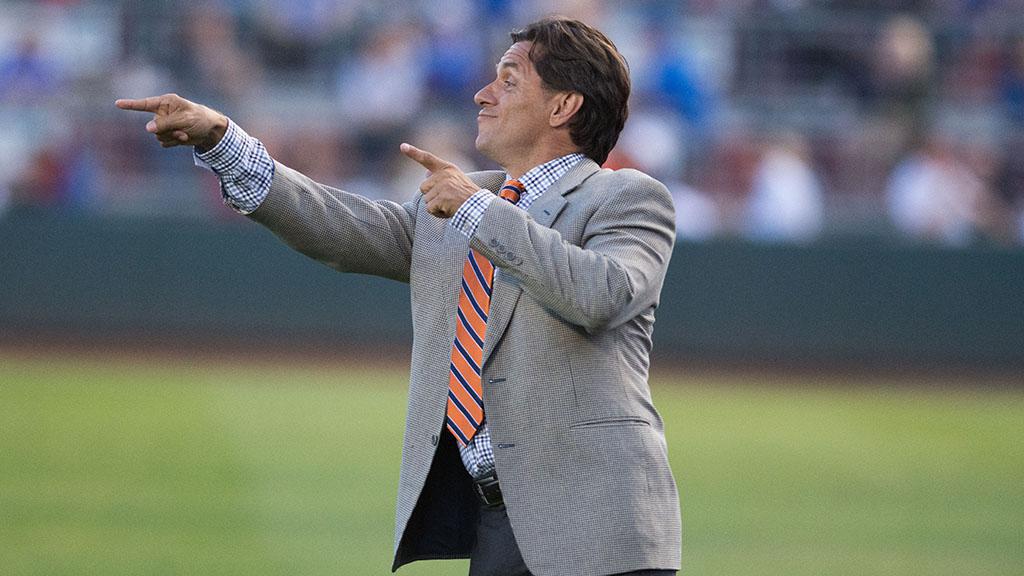 Twelve years after his last professional Head Coaching position, Vaudreuil is making the most of his return.

“It’s absolutely fantastic,” he said. “To see where it’s come now from those pre-MLS days and 10 teams to where there’s no doubt we’re going to be a 28-to-32 team league in MLS, and not even that, just look at the USL with 30-plus teams and groups from overseas wanting to get involved.

“The opportunity as a player and a coach in the growth on a dynamic curve that pro soccer is on in this country, I knew it wouldn’t be too much longer before I had to get back into the professional game at some level, and I’m really excited to be here in Tulsa with the Roughnecks and get a chance to start from scratch and build a team.”

With a playoff place now waiting to be taken, potentially as early as this Saturday night when the Roughnecks play host to San Antonio FC at ONEOK Field, Vaudreuil is ready for both himself and the club to take the next step.

“Hopefully it’ll be sometime before the final game of the season, and it’ll be something that will be positive and that we plan for,” he said of the Roughnecks clinching a playoff spot for the first time. “I think it’ll be exciting, but I think we’ve got to that point now where we expect to be in the playoffs, and maybe when we get there we’ll do it in style and we’ll come [into the playoffs] with all the confidence we deserve, where the players know we can compete with everybody.”