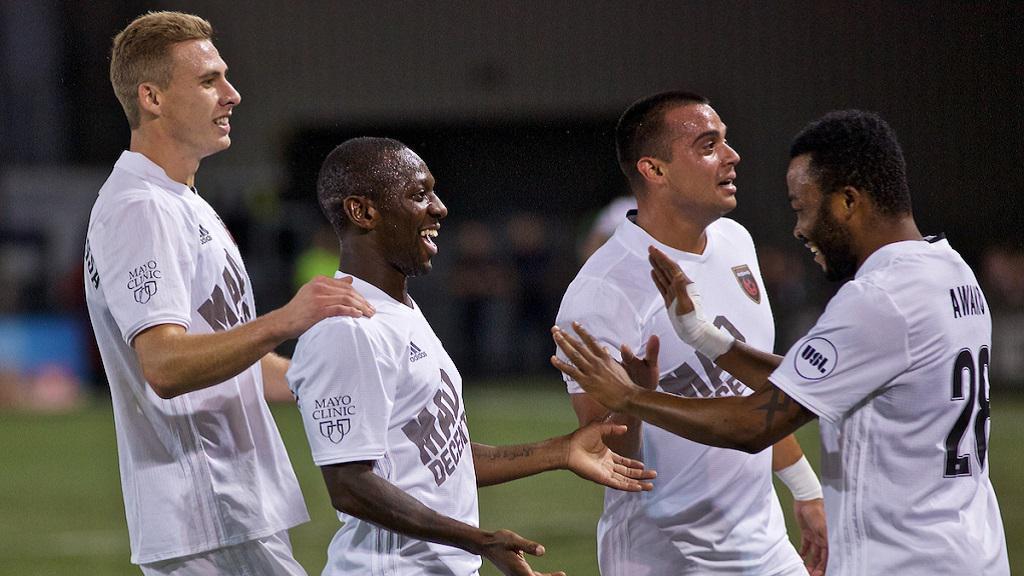 PORTLAND, Ore. – Phoenix Rising FC continued its impressive run, and booked itself a place in the 2017 USL Cup Playoffs with a 2-0 win against the Portland Timbers 2 at Providence Park on Wednesday night. It took just eight minutes for Phoenix to open the scoring as Kendall McIntosh saved Gladson Awako’s initial strike, but could only parry it to Shaun Wright-Phillips, who easily passed the ball into the back of the net. In the 82nd minute a quick free kick doubled Phoenix's lead as Wright-Phillips turned provider, playing a ball forward for Jason Johnson to run onto and bury it for his 10th goal of the season. After conceding Portland set to work to find an equalizer, with Kyle Bjornethun looking particularly dangerous for T2, but the hosts were unable to fine couldn’t find the net, going to the break 1-0 down. In the 63rd minute a corner gave T2 a dangerous chance to equalize as Bill Tuiloma headed on goal only for Wright-Phillips to clear off the line. Johnson was active after coming on as a substitute for Rising FC, and just five minutes after entering the match was played through by Wright-Phillips only to be denied by a strong McIntosh save. In the 79th minute T2 had one last chance with Omar Mohamed finding Augustine Williams on a long throw but his effort was crucially blocked before Phoenix went on to seal the win and a place in the postseason for the first time in club history.

Shaun Wright-Phillips, Phoenix Rising FC – It may not have been a spectacular goal, but Wright-Phillips showed all his experience to be in the right place to stab home the early goal before using that experience again to get the assist on a clever quick free kick. Wright-Philips continued to be active after his goal, creating four chances in the match, managing a 95.7 percent passing accuracy rate and even clearing a ball off the line at a crucial moment in the match.