Surprises abound as windows of opportunity are thrown open 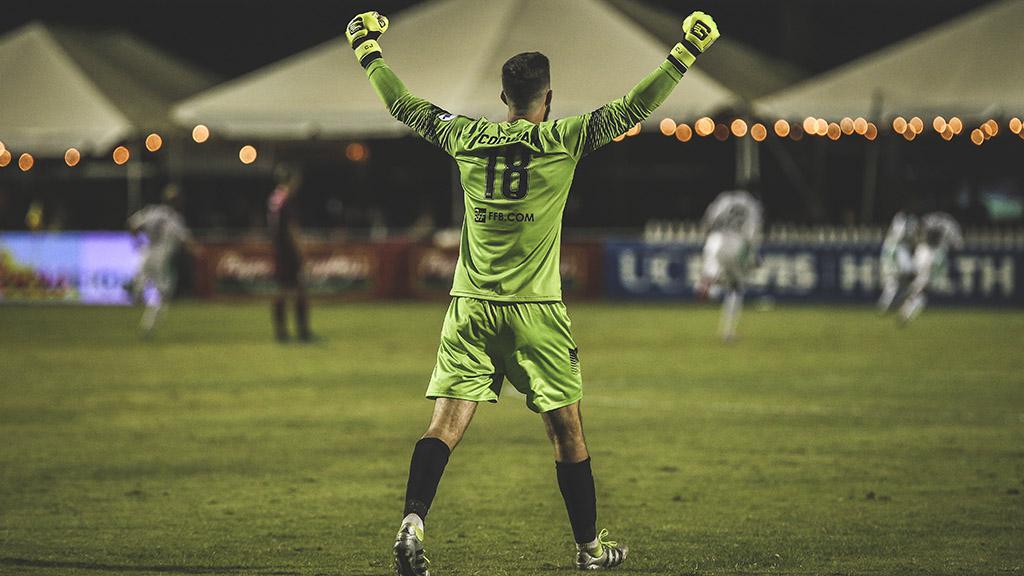 Logically, every game in the USL regular season counts equally. The victory a team picks up in Week 3 of the season counts just the same as the win a team picks up in Week 27. But after this past weekend’s action, it sure doesn’t feel that way, does it? For the second time in September, a string of surprise results – in particular those earned on the road – have left the playoff picture wide open again, both in terms of figuring out which teams are going to get in and what seed they’ll have when they get there.

1. WALK THE LINE: Just over a month ago, OKC Energy FC Head Coach Jimmy Nielsen was talking about his side’s remaining games needing to be treated like cup finals. “From week to week, you’re in and you’re out, you’re up and you’re down, it’s, as usual, a very tight Western Conference,” he told USLSoccer.com. After Saturday night’s 3-1 victory against Sacramento Republic FC at a sold-out Papa Murphy’s Park, Energy FC is definitely up after the past weekend’s results, as it took what might be a decisive lead in the race for eighth place in the Western Conference. OKC’s energy – pardon the pun – to open the game allowed the side to strike twice in the opening 10 minutes, as its hosts were caught cold. With three home games remaining, Nielsen’s belief that his side would have its fate in its hands is certainly coming true.

2. SWEPT AWAY: The flipside to Energy FC’s remarkable road victory was Colorado Springs Switchbacks FC’s devastating home defeat, as the Swope Park Rangers put on a finishing clinic to take a 3-1 victory at a soggy Weidner Field on Saturday night. The Rangers’ efficiency in putting away three goals in two minutes as the game resumed following a lightning delay highlighted how dangerous Swope Park can be if given too much space, and it sealed the defending Western Conference champion’s return to the postseason. For Colorado Springs, this may have been one defeat too far, with the side now needing to make up a five-point gap to Energy FC with only three games to do it. 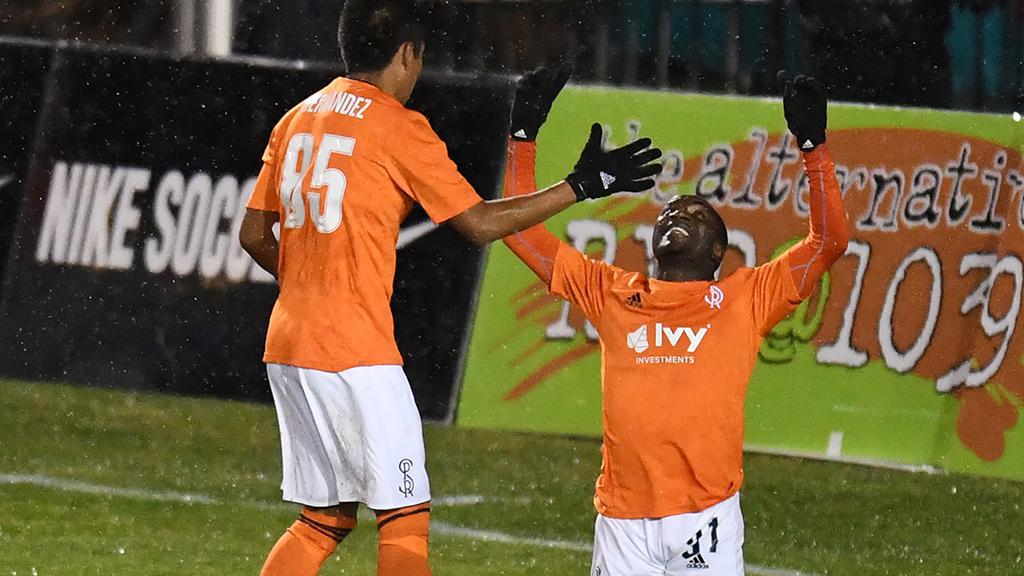 3. STEELY RESOLVE: Bethlehem Steel FC fans don’t need reminding how the club let a chance at a playoff place slide away down the stretch last season. On Sunday, they got reason to believe the end of this season is going to be different thanks to a 3-2 victory against in-state rivals the Pittsburgh Riverhounds that ended a five-game winless streak and pushed Steel FC back above the red line in the Eastern Conference. Cory Burke’s two goals, and a spectacular opening tally by Adam Najem, gave Bethlehem the cushion it needed to withstand the Riverhounds’ second-half surge. There’s plenty more work to be done for Bethlehem to achieve its goal, but the side’s talent has it exactly where it needs to be.

4. ROARING BACK: The team that pipped Steel FC to that final playoff place a season ago was Orlando City B, and with a dramatic 2-1 victory against the Charleston Battery on Saturday night, OCB confirmed it isn’t going to give up hope of a return to the playoffs without a serious fight. Orlando is by no means certain of a postseason berth – both Bethlehem Steel FC and the New York Red Bulls II have the necessary games in hand to overtake it even if OCB wins out – but as it did in the final game of the season a year ago to lead the side to victory against Bethlehem, Lewis Neal’s goal against the Battery could be looked at as decisive should OCB return to the postseason.

5. PICKENS OUT A WINNER: Technically, the City of Palms is a reference to Fort Myers, Florida, but on Saturday night, its capital became Al Lang Stadium as Matt Pickens’ outstanding late save not only preserved a big 1-0 win against the Charlotte Independence for the Tampa Bay Rowdies but also saw the side move into as strong as a position as it’s held in quite a while. Pickens’ top-shelf save of Enzo Martinez’s effort to the top-left corner in the 77th minute, palming the ball over the crossbar, allowed Hunter Gorskie’s first-half goal to stand as the winner and put Tampa Bay with a fighting chance at second place when it’s all said and done in the Eastern Conference. As good as Tampa Bay has been at home this season, a second-place spot would be an awfully good place to be for the Rowdies and their fans. 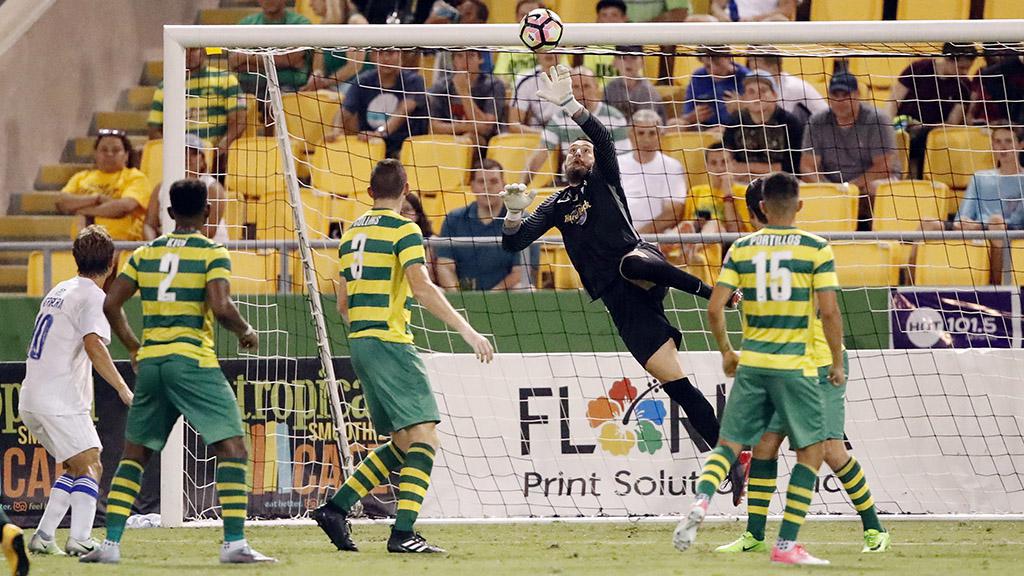 6. WAKE-UP CALL: While Tampa Bay is eyeing a second-place finish, a team that some felt should have been in that vicinity at the start of the season is still finding ways to make life difficult for itself. FC Cincinnati’s dramatic late 2-2 draw against Saint Louis FC saw the side fall back into the same traps that have proven difficult to shake and leave the side still in the middle of a battle to reach the playoffs. It certainly could have been worse if not for Danni König’s stoppage-time penalty kick to earn the side a point as another slow start seemed set to doom the side to another defeat, but the inconsistency the side has shown this season is still very concerning as another big road game at Charlotte looms in the distance.

7. SAINT LOUIS BLUES: If you wanted a visual guide as to what made a team make or miss the playoffs on Saturday night, Saint Louis FC was the unfortunate side to watch as it saw what would have been another massive win slip away at Toyota Stadium – Saint Louis. In a blink of an eye, the club’s fans went from the elation of what looked like a game-saving stop by goalkeeper Devala Gorrick to deny Jimmy McLaughlin in stoppage time, to McLaughlin being felled in the penalty area for what would prove to be the equalizer. Saint Louis is still only three points out of a playoff place, which means it’s by no means out of luck when it comes to a postseason place. The difference those two points might have made, though, are the sort that tend to come back to haunt a side.

8. FIT TO BE TIED: If Saint Louis’ fans were left disappointed by its late letdown, how much Ottawa Fury FC’s fans be feeling after in successive games a stoppage-time chance at victory came back off the woodwork to leave the side stuck with five consecutive draws and hopes of the postseason fading away. As has been a regular occurrence this season, Fury FC put forward enough to take victory against Eastern Conference-leader Louisville City FC on Sunday afternoon at TD Place. Just as Andrae Campbell’s late effort against the Charlotte Independence a week ago was denied by the woodwork, on Sunday, it was Sito Seoane’s turn. His effort caromed off the crossbar and out to leave the hosts to settle for a 1-1 draw, which leaves them positioned five points out of the playoffs with four games to go. 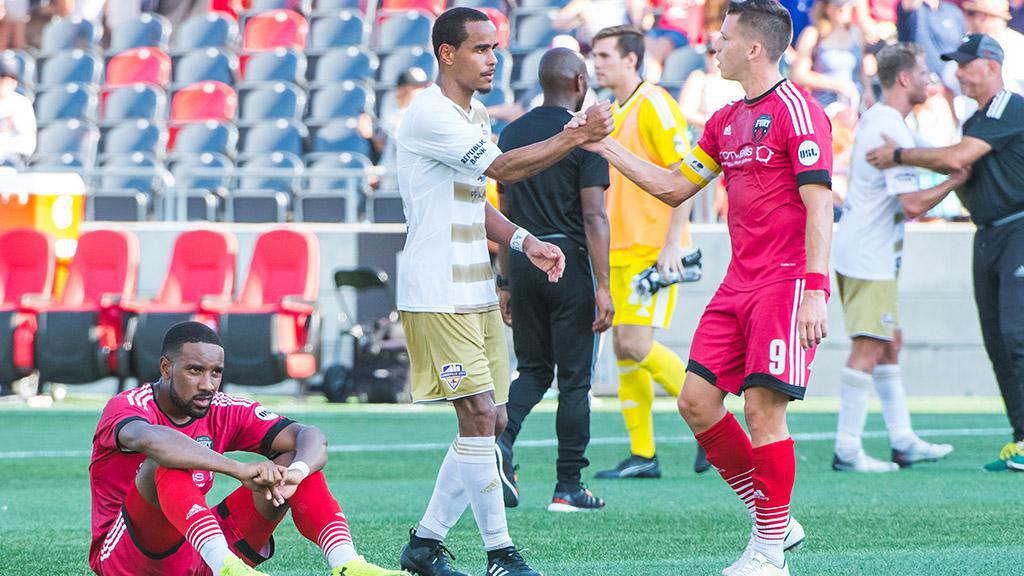 9. RIDING HIGH: There haven’t been many better stories in the USL this season than that of Tulsa Roughnecks FC, which is poised to go from the worst points total in the league one season ago to a place in the postseason the next thanks to a turnaround led by Head Coach David Vaudreuil and his band of players. Saturday night’s 1-0 victory against the LA Galaxy II provided another big step toward the first playoff berth in club history as Joey Calistri’s goal made the difference, with Fabian Cerda’s eighth shutout of the season continuing his stellar year. With the entertainment and work-rate the side brings on a nightly basis, the Roughnecks have grabbed their opportunity and not let go.

10. ROLLING ROCK: A four-goal outburst on Sunday afternoon again put the spotlight on Phoenix Rising FC’s attack as it swept to victory against Vancouver Whitecaps FC 2, but as entertaining as the side was in the attacking third – Alessandro Riggi’s goal being one of the best of the weekend – if you asked the side, it’s likely the shutout was the most important part of the game. Phoenix’s 10-game undefeated streak has seen it register six shutouts, including three in a row after Sunday’s victory. Now the hottest team in the USL with four consecutive victories, Phoenix is looking like a side that will also be booking its place in the postseason for the first time this season.

11. MASTER BLASTER: Reno 1868 FC’s place in the playoffs is already secured, but now the side is aiming to make sure its place in history is also in the USL record book for a while as well. After another six-goal outing on Saturday night against the Portland Timbers 2 in front of another impressive crowd at Greater Nevada Field, 1868 FC reached 69 goals for the season to continue the finest attacking season in USL history. The end of Dane Kelly’s scoreless run helped pave the way early, while Chris Wehan’s 11th assist of the season gave him a two-assist lead in the race for that individual award and further boosted his Rookie of the Year credentials. With Real Monarchs SLC coming to town next Saturday, Reno is more than ready.