City extends lead in East before 6,015 fans at TD Place 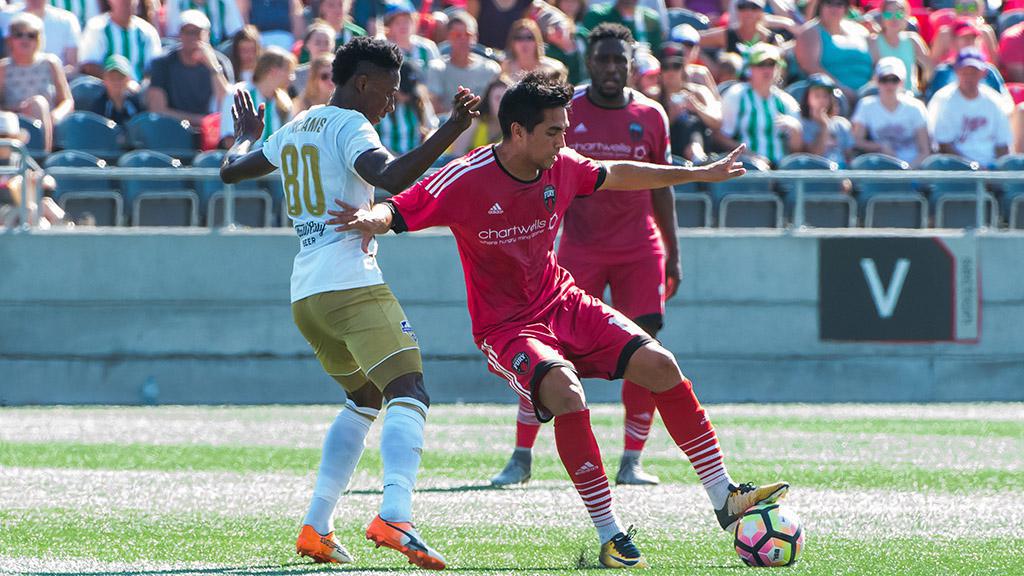 OTTAWA – Ottawa Fury FC and Louisville City FC played to a 1-1 draw on Sunday afternoon in front of 6,015 fans at TD Place on Sunday afternoon as Louisville extended its lead in the USL Eastern Conference to seven points with four games to go in the season. Ottawa had the first chance on goal as Steevan Dos Santos’ shot from 20 yards was easily handled by Louisville goalkeeper Greg Ranjitsingh, while Louisville’s Mark-Anthony Kaye had a similar effort from just inside the penalty area in the 14th minute. Louisville’s Luke Spencer almost gave his side the lead on a breakaway in the 36th minute only for the covering defense to do enough to reduce the danger of his finish. City found the breakthrough 11 minutes into the second half, however, as a good build-up down the left saw Speedy Williams chip a ball to George Davis IV as he broke in from the right, and Davis’ first touch carried him around Fury FC goalkeeper Callum Irving and able to tap home into the open net. Ottawa almost answered immediately as Sito Seoane forced a good low save by Ranjitsingh, but Fury FC leveled in the 68th minute as Carl Haworth’s initial shot was saved, but Nick DePuy was in the right place to put home the rebound. Haworth forced a low save to the right corner by Ranjitsingh with 11 minutes to go, and Kyle Venter’s header from the ensuing corner was cleared off the line by a Louisville’s Sean Reynolds. The visitors had a big chance to retake the lead two minutes later as Spencer shot high from 10 yards after a driving run by Davis, and in the 89th minute Davis almost bagged his second with a low shot that just missed the left corner. Ottawa almost grabbed a dramatic victory in stoppage time as Sito Seoane hit the crossbar with a rasping effort from the top of the penalty area, but the game ended level as Ottawa’s winless streak reached eight games.

George Davis IV, Louisville City FC – Davis scored his second goal in as many games to open the scoring, set up a big chance for the visitors late and almost grabbed victory himself in a sterling attacking effort.