Roughnecks Rebound with Win over LA 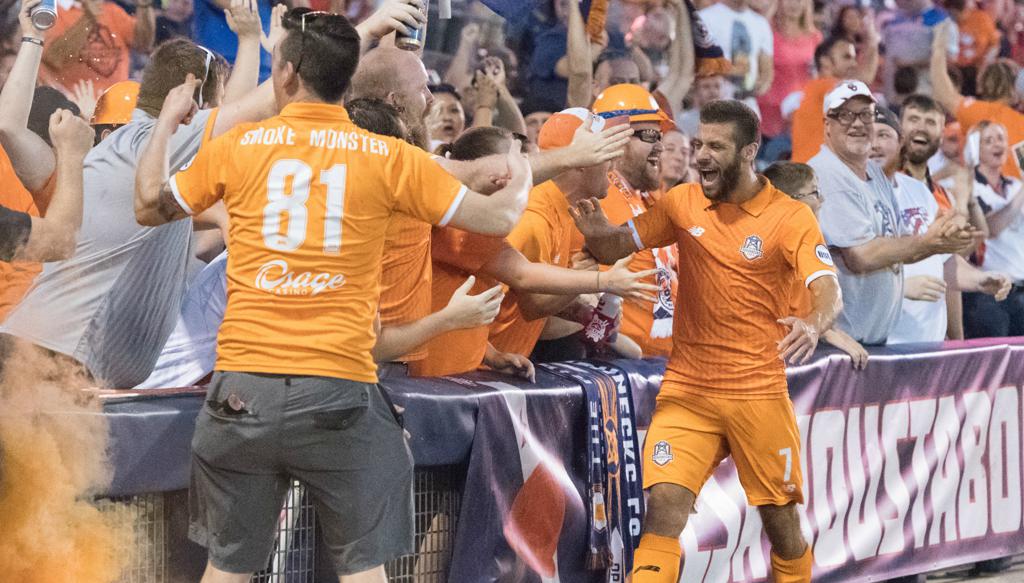 TULSA, Okla. – Joey Calistri was in the right place at the right time for Tulsa Roughnecks FC on Saturday, lifting the hosts over visiting LA Galaxy II in a 1-0 win at ONEOK Field. Calistri delivered the lone goal of the game in the 26th minute, scoring for the ninth time in his first USL season. Joaquin Rivas engineered the scoring sequence, working into wide open space on the left wing and penetrating into the area before laying off a ball intended for Juan Pablo Caffa. LA defender Leonardo Sepulveda stepped in to deny the initial distribution but Calistri was there to clean up and beat Justin vom Steeg for the eventual game-winner. Though Calistri ended the night as the lone name on the scoresheet, the two sides combined for 33 shot attempts in an open game that featured a number of quality chances on both ends, including a number for Tulsa’s leading scorer Ian Svantesson that were deftly stopped by the 20-year-old vom Steeg as the former U.S. U20 international impressed in his debut for Los Dos. Tulsa continued its push for the playoffs by moving to 13-11-4 overall (43pts) while the Galaxy II now stand at 7-16-5 (26pts).

1. Saturday marked a long-awaited return to ONEOK for the Roughnecks following a stretch of five road games in-a-row. The side picked up right where it left off with Calistri’s goal sending Tulsa to a third consecutive home win to run its season total to nine home victories. The tally is tied for the second-most in the USL Western Conference, behind only conference leaders Real Monarchs SLC and even with defending conference champions Swope Park Rangers. With the win, Tulsa also avoided posting back-to-back defeats for the first time since June, bouncing back from a shutout loss at the hands of rival OKC Energy FC in its previous outing.

2. The Roughnecks’ ability to take three points from the teams which the side sits above in the standings has contributed greatly to putting the squad on the verge of a playoff berth. After getting past Los Dos on Saturday, head coach David Vaudreuil and company are now unbeaten in their last nine games against teams which sit below the playoff line in the USL Western Conference (6-0-3), and have recorded an 8-2-3 record against such teams overall with the only two setbacks coming at the hands of Colorado Springs Switchbacks FC.

3. With four games remaining on the regular season slate, Tulsa figures to be battling for positioning in the bottom half of the Western Conference playoff ladder. The Roughnecks will get the chance to further their cause with three of those matches coming at home – beginning with a showdown with San Antonio FC next Saturday – but it is the lone road trip to Phoenix the following week which may prove the most vital. With Rising FC set to visit Vancouver on Sunday, Tulsa and Phoenix currently sit level on points with the latter holding two games in hand.

Fabian Cerda, Tulsa Roughnecks FC – The Tulsa keeper turned away all five shots he faced in the match to record his eighth clean sheet of the season and pick up his seventh win in nine home appearances