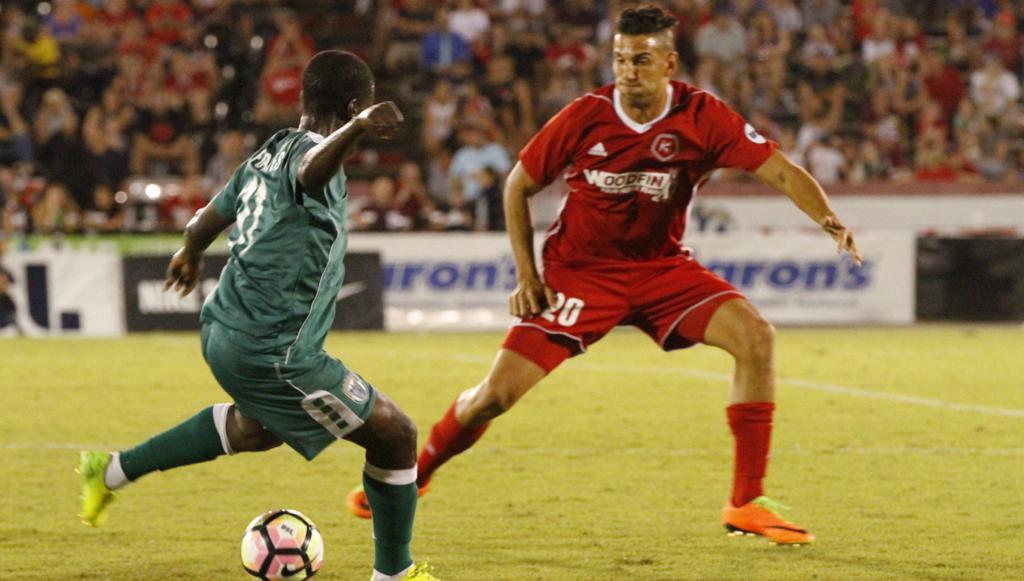 RICHMOND, Va. – A late goal from substitute Mikey Minutillo proved to be the difference as the Richmond Kickers edged the visiting Rochester Rhinos, 1-0, in front of 5,969 fans at City Stadium on Saturday. The two teams were locked in a defensive stalemate for much of the match as the first shot on target came nearly 28 minutes into the action and with neither side relenting entering the final 20 minutes, Kickers head man Leigh Cowlishaw called on Minutillo in the 71st minute. The Rhinos maintained control of the run of play but in the 80th minute, Minutillo was able to hold off Rochester’s Sergio Campbell and run on to a bouncing clearance from Richmond keeper Travis Worra and send it into the back of the net from in close. With the win, the Kickers improved to 7-14-8 overall (29pts) and 6-6-3 at home while Rochester dropped to 11-7-10 overall (43pts) with a second consecutive loss.

1. The matchup always figured to be one in which goals would be hard to find given that Rochester entered with the top defense in the USL Eastern Conference and Richmond’s recent uptick in form had seen the squad allow one goal or less in four consecutive home appearances prior to Saturday’s clash. Minutillo’s intervention came just nine minutes after he entered for Oliver – against the run of play – but his second goal of the year was enough to give the Kickers their third consecutive home win and the side’s fourth overall in its last six outings after posting just three through the first 22 matches of the season. In addition to providing the assist on the lone goal, Worra recorded his third clean sheet of the season. The D.C. United loanee has proven a common denominator in Richmond’s success this season, registering a 5-2-0 record in seven appearances.

2. The victory was a deserved one for a competitive Kickers side that has now seen 23 of its matches decided by one goal or less this season. A lack of firepower has prevented the Kickers’ 25th anniversary season from playing out how they may have hoped on the field but with nearly 6,000 more fans packing City Stadium on Saturday, the club continued to make a strong statement regarding its momentum in the RVA area. The historic USL side is on pace to increase its average attendance for the fifth consecutive season and has now hosted 4,000 fans or more in eight of 15 matches at City Stadium in 2017.

3. The loss is a setback for a Rochester side with its eye on a top four spot in the Eastern Conference. The Rhinos close a three-match road swing with just one point after sustaining successive one-goal losses to Louisville City FC and Richmond following a draw at Pittsburgh on September 16. Rochester does get the benefit of wrapping up the regular season with three of its final four matches at home, but with the squad firmly locked in a tight battle to earn the right for a guaranteed home playoff match, the side will look to capitalize on its opportunities to come at the virtual fortress that is Capelli Sport Stadium. For a team that struggled through a seven-match road winless streak away from home following a season-opening win at Bethlehem, the possibility of the entire path to the USL Cup taking them away from upstate New York is looming however.

Travis Worra, Richmond Kickers – Worra was asked to make just one save in a shutout effort, but sprung Minutillo for the decisive strike as the squad captured its fifth win in his seven appearances