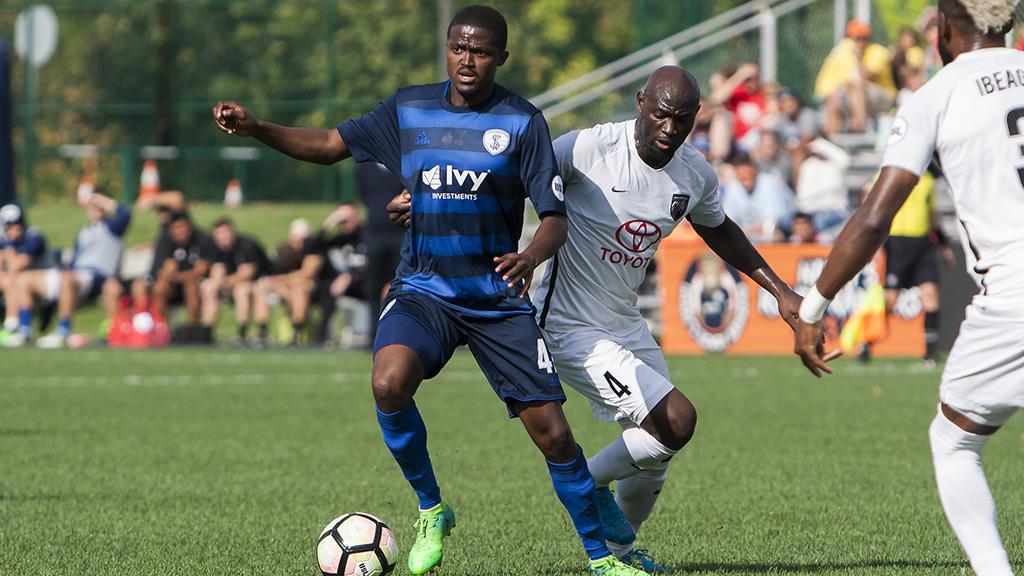 KANSAS CITY, Mo. – The Swope Park Rangers scored three second-half goals to pull away from San Antonio FC in a 5-2 victory at Children’s Mercy Victory Field on Sunday afternoon. The Rangers took the lead in the 11th minute from the penalty spot after Christian Duke was brought down in the penalty area. Nansel Selbol stepped up to take and put home his sixth goal of the season into the right corner of the net. San Antonio almost hit back six minutes later when a shot by Billy Forbes was came back off the left post, but in the 20th minute Owayne Gordon struck for the visitors as he put away a cross by Forbes to level the score. Swope Park almost regained the lead as Kharlton Belmar got to a free kick before SAFC goalkeeper Diego Restrepo, but was unable to redirect his header on target, and Belmar almost set up Duke in the 42nd minute, only for Cyprian Hedrick to make an excellent last-ditch block. Tyler Pasher was next to go close for the hosts a minute later as his chance was closed down by Restrepo, but in first-half stoppage time Felipe Hernandez found the right corner of the net from a free kick to restore the Rangers’ lead. Belmar went close again less than a minute into the second half, only for Restrepo to get down well to save, but just past the hour-mark a good move down the left set up Selbol for his second of the game. Belmar then got his reward for a good performance with the Rangers’ fourth in the 65th minute, while Max Rugova notched his first professional goal with 11 minutes to go to complete the rout after a 20-pass sequence ended up releasing Mark Anthony Gonzalez down the left to send in a low cross for Rugova to finish. Forbes scored a consolation goal with five minutes to go for SAFC, but that proved all for the visitors as the Rangers ran out winners.

Nansel Selbol, Swope Park Rangers – Selbol notched another pair of goals to give him seven for the season as the Rangers swept to victory in an impressive attacking performance.