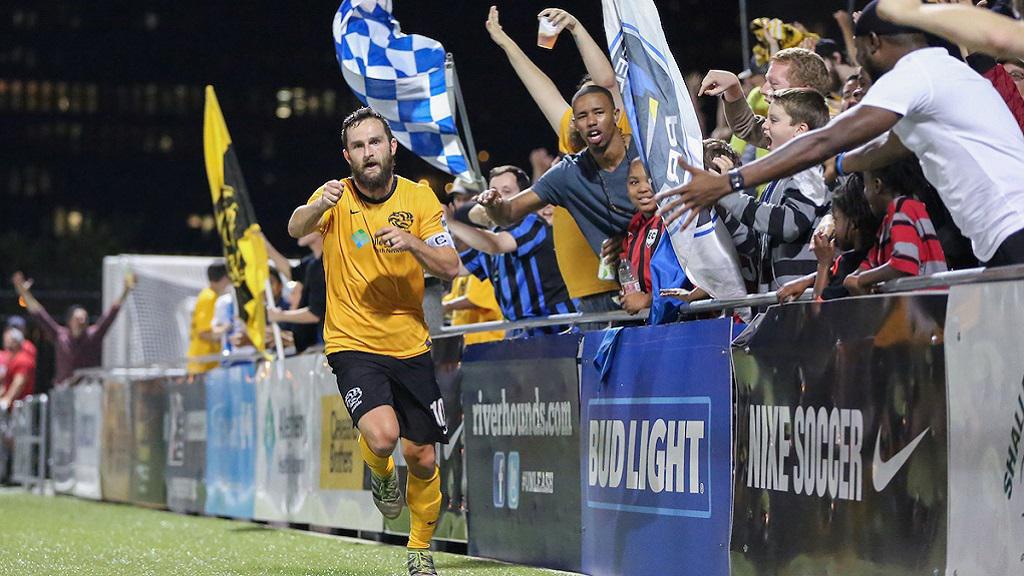 PITTSBURGH – A matter of moments away from a place in the Eastern Conference playoff positions at Highmark Stadium on Saturday night, the Pittsburgh Riverhounds appeared set to rebound strongly from their first defeat of the month against long-time foe, the Rochester Rhinos.

But after Joe Farrell's equalizer for the Rhinos in second-half stoppage time stole a 1-1 draw for the visitors, Pittsburgh remained on the outside looking in with four games to go in the regular season.

“It was a bit of a chess match,” said Pittsburgh Head Coach Dave Brandt. “There weren’t many opportunities for either team. [Kevin Kerr's opening finish] was a great goal, so right at that point that would’ve been a super result for us.”

It was a decision from Brandt that got the Riverhounds in to the match, and got them the lead, when he brought on Kenroy Howell and Kay Banjo as second-half substitutes. Both players took charge of the match and adding a lot more attack to the match.

“Kenroy is a very creative player and has consistently trained well," said Brandt. "Both of those guys have been fantastic, and so it wasn’t a hard decision for me to get them into the game.”

His captain, midfielder Kevin Kerr, agreed, impressed with the performances of the two players. “I thought today both of those boys were brilliant. Kay won a lot of free kicks up top and is a big strong boy and held the ball up when we needed it,” said Kerr.

Kerr also impressed, winning four duels, creating two chances, and scoring the goal for the Riverhounds. One of the team's standout performers during a run that saw the side go 3-0-2 prior to last Saturday's defeat to Louisville City FC, Kerr capitalized on the boost in energy brought by the pair of substitutes and notched the opening goal after a fine give-and-go at the top of the penalty area.

“It was Rochester, we weren’t going to get many chances. I was quite confident I’d get one,” said Kerr. “And I thought Kay was brilliant when he came on. He’s a big, strong boy. He’s a great halfback. I was just trying to get a clean strike on it and luckily it went across the goalie and in the far corner.”

Captaining the side, Kerr was active all over the park in his performance, playing both up front and on the defensive side.

“I feel comfortable playing anywhere,” said Kerr. “I’ve been here a good while now. I got a decent bit of experience. I’ve told the guys many times I’m willing to play wherever.”

For all their efforts to break down a tough Rhinos' defense, however, the Riverhounds didn't walk away with their reward. After a 0-0 draw in the first meeting between the teams this season at Capelli Sport Stadium on July 22, the Riverhounds winless streak continued thanks to Farrell's late equalizer.

Pittsburgh last beat the Rhinos on July 4, 2014, leaving Brandt and many of the current squad in a position of never having tasted victory against the 2015 USL Cup champion.

Brandt and the Riverhounds will have one more chance this season to close it out and get a win over the Rhinos when the two sides play again on October 7th at Highmark Stadium in the penultimate game of the regular season for both sides. With the Rhinos' looking certain to qualify for the USL Cup Playoffs, the clash could determine whether the Riverhounds join them.

“Some of it at this point, especially against Rochester, is just fighting and hanging in there and getting the goal and then closing it out,” said Brandt. “We were close – we all know it. But close doesn’t count."