Farrell scores in the final minute to steal draw for Rochester 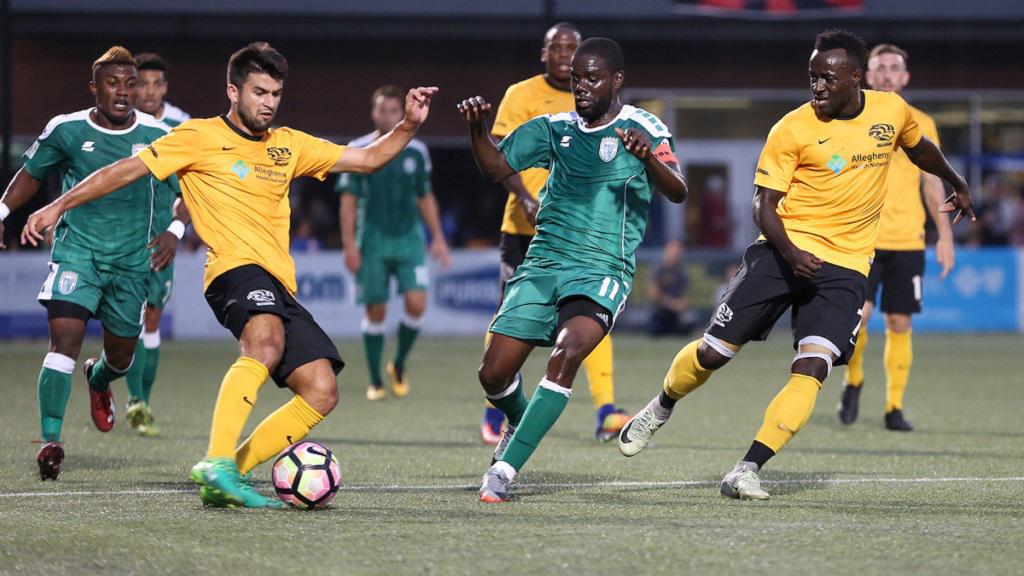 PITTSBURGH – The Pittsburgh Riverhounds very nearly managed a vital win but a late equalizer cost them dearly as the Rochester Rhinos scored late to seal a 1-1 draw at Highmark Stadium on Saturday night. A poor pass with 19 minutes to go allowed Pittsburgh to jump into the lead as the Riverhounds pounced on the ball allowing Kay Banjo to exchange passes with Kevin Kerr, who was given the space to shoot across the face and in to the back of the net. Rhinos defender Joe Farrell broke the home fans' hearts in the 90th minute after a great cross from Christiano Francois found the wide open center back in the penalty area, and Farrell easily headed home the late equalizer. Rhinos midfielder Wal Fall had the first chance of the match in the 34th minute from a corner kick, as he leaped the highest but could only find the crossbar. That sparked the Rhinos into action, as they began getting the ball into the box more frequently. Kerr hit the back of the net for the Riverhounds in the 59th minute with a good chip, but he made his run too early, the goal being chalked off for offside. Kenardo Forbes found space in the 63rd minute to shoot at goal but was denied by the Riverhounds goalkeeper Matt Perrella to keep things scoreless.

Kevin Kerr, Pittsburgh Riverhounds – Scoring the opening goal was the icing on the cake of a good performance from the Riverhounds captain Kerr. The midfielder created two chances for team mates in the match, while winning four duels, and drawing two fouls, forcing the Rhinos into errors throughout the match.