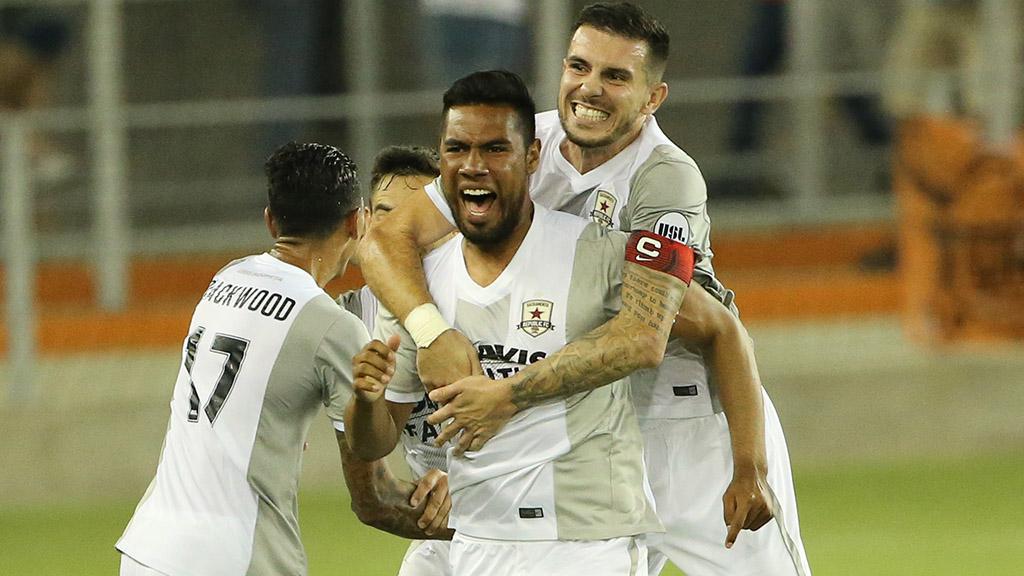 As the games remaining count down, there is nothing more important for teams chasing a place in the USL Cup Playoffs as wins. It serves as the first tiebreaker for position in the standings, for one, but more importantly can make a major difference as to whether a side will be in or out of the postseason when the regular season comes to an end.

Draws can be useful, certainly. There has been on average one team a season that has reached the postseason despite having fewer wins than a team that missed out; last season it was OKC Energy FC, whose league-record 13 draws and 10 wins were enough to earn a No. 7 seed in the Western Conference. That said, if your win total is higher than those of the others around you, a place in the playoffs is likely to be yours.

1. COME THROUGH CARLOS: In terms of late rolls of the dice, bringing on a center back whose only previous professional goal had come against amateurs in the Lamar Hunt U.S. Open Cup was a longshot. A minute after being introduced in the fifth minute of stoppage time, however, Carlos Rodriguez provided the boost Sacramento Republic FC so desperately needed. The center back’s first touch of the ball from James Kiffe’s corner kick found the right corner of the net for a 2-1 victory against Rio Grande Valley FC, and in the process snapped a four-game winless streak for Republic FC as it put a positive space between itself and the teams sitting below the red line. As streaky as Sacramento has been this season, it wouldn’t come as a surprise if Saturday’s win kicked off another positive run of form to solidify a fourth consecutive playoff berth.

2. ORANGE BLOSSOM: Orange County SC didn’t quite need the late dramatics of its California rival, but its 2-1 victory against the Swope Park Rangers on Saturday night not only gave the club its first victory at Champions Soccer Stadium but also launched the side back into the conversation for a postseason berth. It certainly didn’t come easily, with Charlie Lyon continuing to make a case for being the club’s best player this season with his late penalty-kick save to deny the Rangers’ Kevin Oliveira with four minutes to go. OCSC was also fortunate that Swope Park was just off as regularly as it was, with the visitors mustering only two shots on goal from its 17 total shots on the game. While there’s work still to be done, though, Irvin Parra’s first goal for Orange County has the club in far better shape than it entered the weekend.

3. SHADE OF GRAY: Orange County benefited greatly from a victory elsewhere earlier on Saturday night, as Phoenix Rising FC’s A.J. Gray proved a late trump card again for Phoenix Rising FC as it took a 2-1 victory against Colorado Springs Switchbacks FC at Weidner Field. After setting up the game-winner a week before against Seattle Sounders FC 2, Gray’s immediate answer to Colorado Springs’ equalizer in the 83rd minute took the wind out of the sails of Rising FC’s host and might have earned one of the most significant results of the season. Phoenix may be sitting in seventh place now, but seven points from its last three games, and a three-point edge on OKC Energy FC and the Switchbacks with multiple games in hand on both, the path to the playoffs appears clear right now.

4. POWER OUTAGE: After the late drama of Saturday night’s Western Conference action, it seemed like the offensive onslaught OKC Energy FC put on against Vancouver Whitecaps FC 2 at Taft Stadium had to pay off eventually. Unfortunately for Energy FC there were no late heroics, unless you count those by WFC2 goalkeeper Sean Melvin, whose seven-save shutout saw the game end in a 0-0 draw, and left Energy FC back in a precarious position with six games to go in the regular season. Last season, Energy FC went 0-3-3 to close out the regular season, only to have done enough prior to earn its spot. Head Coach Jimmy Nielsen’s side is going to have to find a run from somewhere if its playoff streak is to continue.

5. ON THE SPOT: In amongst all of the teams vying for a place in the Eastern Conference postseason, no team appears to be timing its run better than the defending champion New York Red Bulls II. With the late letdowns New York’s defense repeatedly suffered in the first two-thirds of the season, it looked possible that this year’s USL Cup Playoffs would go on without the side that lifted the trophy a year ago. After Saturday’s 2-1 victory against Toronto FC II, however, New York is on a six-game undefeated streak (4-0-2) and is sitting in sixth place in the conference standings with a four-point cushion on the teams that sit below the red line. Stefano Bonomo was the key performer on Saturday as he converted twice from the penalty spot to earn the victory, which sets up a must-see clash with FC Cincinnati on Saturday.

6. ALONE AT THE TOP: Saturday night’s clash between the Pittsburgh Riverhounds and Louisville City FC at Highmark Stadium looked like a chance for the Riverhounds to confirm their presence as a playoff contender after a five-game undefeated streak moved the side within a point of the playoff positions. Instead, it became another exhibition of how strong and deep a lineup Louisville City FC has in its possession as Head Coach James O’Connor’s side swept to a 3-0 victory that completed a three-game sweep of the season series between the clubs. Louisville held a major edge in possession and shots as it moves three points clear of the Charlotte Independence at the top of the Eastern Conference.

7. SLIDING AWAY: As tough as the defeat for the Riverhounds might have been, Pittsburgh is still in the hunt for a postseason berth, something that isn’t necessarily the case anymore for Saint Louis FC. A heartbreaking 2-1 defeat to the Harrisburg City Islanders on Saturday night at Toyota Stadium – Saint Louis might have broken the back of STLFC’s playoff chances as another game went awry for the squad. Saint Louis’ situation it’s irretrievable, it still sits four points out of the playoff positions with five games to go pending FC Cincinnati’s meeting with Harrisburg on Tuesday night, but a lot seems to now hinge on this Saturday’s game with Orlando City B. Win, and hope stays alive. Lose, and it’s probably curtains.

8. FIT TO BE TIED: Sitting right alongside Saint Louis is Ottawa Fury FC, which once again played to a draw as it earned a point on Saturday night against the Rochester Rhinos. In a vacuum, this would be a good result for Fury FC, with the Rhinos having posted an impressive road record this season. With Ottawa’s place in the playoffs sitting precariously, however, this was a performance that the side will likely be disappointed it didn’t take more from. Fury FC created enough quality in the second half to find a winner as Dan Lynd came up big for the Rhinos in goal, but in the end Ottawa’s frustrations got the better of them. Gerado Bruna’s red card with two minutes to go didn’t have an impact on Saturday’s game, but it certainly could on Fury FC’s next outing as it visits the second-place Charlotte Independence in the unenviable position of needing a victory.

9. REED TO THE RESCUE: In two consecutive games, San Antonio FC has trailed late in contests. In both, it has been captain Michael Reed who has come through in the clutch. The midfielder’s second goal of the season on Saturday night to earn a 1-1 draw with the LA Galaxy II brought the spotlight again to one of the players in SAFC’s lineup that might not otherwise draw attention, but has been important to the team’s success this year. Reed’s numbers aren’t eye-popping – he doesn’t lead SAFC in any major statistical categories – but what he does bring is a steady calmness to the center of midfield that means he’ll make the right pass, and make the right move defensively, when needed. That calmness has been evident in his set piece delivery over the past two weeks. After setting up both of San Antonio’s goals in its late comeback victory against Real Monarchs SLC in Week 24, his precise finish allowed SAFC to escape with a point, and move within range of clinching a playoff place in Wednesday night.

10. HELD STEADY: San Antonio wasn’t the only side at the top of the Western Conference unable to get a result on the road this weekend. In addition to Swope Park’s defeat against Orange County, both conference-leader Real Monarchs SLC and Reno 1868 FC were held to a point apiece in their visits to the Portland Timbers 2 and Seattle Sounders FC 2 respectively. For Real, Reno and SAFC, the path to the playoffs is secure, but this weekend’s games illustrate that there are going to be some serious challenges from unexpected sources down the stretch. Whichever team manages those the best should be in the best position moving into the postseason.

11. MADE TO MOVE: Of all the teams sitting on the sidelines this weekend, the team that might have entered Week 26 the happiest is FC Cincinnati. Still sitting in the playoff positions after the weekend’s action, FCC now has a chance to make a big move this week with a pair of games that offer the side to chance to ramp up toward the playoffs. Nothing’s for certain, of course. You only need to look at the havoc FCC’s Tuesday-night opponent the Harrisburg City Islanders wrought on Saint Louis FC’s playoff hopes on Saturday to know that, and the New York Red Bulls II will be a challenge to overcome, even in front of a record-setting crowd for the club’s home finale on Saturday. The opportunity is there for Head Coach Alan Koch’s side to take, though, and cement its place in the postseason positions.