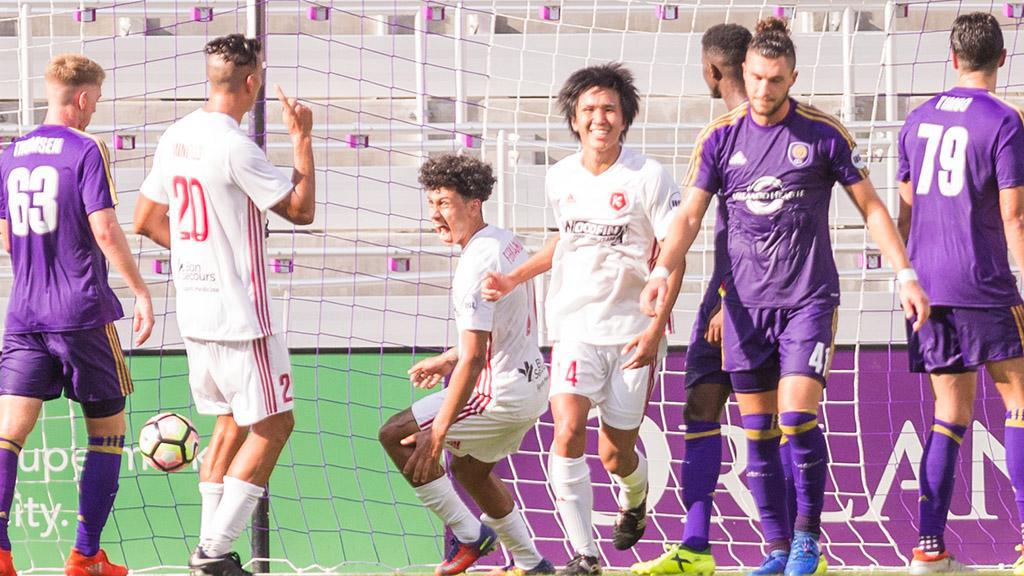 ORLANDO, Fla. – The Richmond Kickers scored twice in the final five minutes of the first half to end Orlando City B’s 12-game undefeated streak with a 2-0 victory at Orlando City Stadium on Thursday evening. Richmond almost struck first in the fourth minute as a low cross from the left by Braeden Troyer was met first-time by Luis Fernando, but his effort went just wide of the left post. Orlando’s first good chance came to Hadji Barry, but his header went over the crossbar after taking a firm bounce off the turf from Scott Thomsen’s cross in the ninth minute. The Kickers had the better pressure in the first half, though, and took the lead five minutes before the break as a free kick by Sunny Jane was knocked back across goal by Mallan Roberts, and Mikey Minutillo knocked home the chance at the top of the six-yard area. Jane then took advantage of another set piece, curling home a finish into the left corner of the net in first-half stoppage time to double the lead. The game began to even out in the second half, and Jane went close to a second with a shot that just missed the top-left corner, but OCB was unable to create many chances until Zach Ellis-Hayden forced a good save by Kickers goalkeeper Travis Worra with 20 minutes to go. OCB was unable to seriously threaten a comeback late, however, as a late save by Worra on Albert Dikwa in stoppage time allowed the Kickers to record a shutout in their first road win of the season.

Sunny Jane, Richmond Kickers – Jane provided the initial ball on the Kickers opening goal, and then curled home a fine free kick for their second, while also completing 39 of 44 passes for the game.