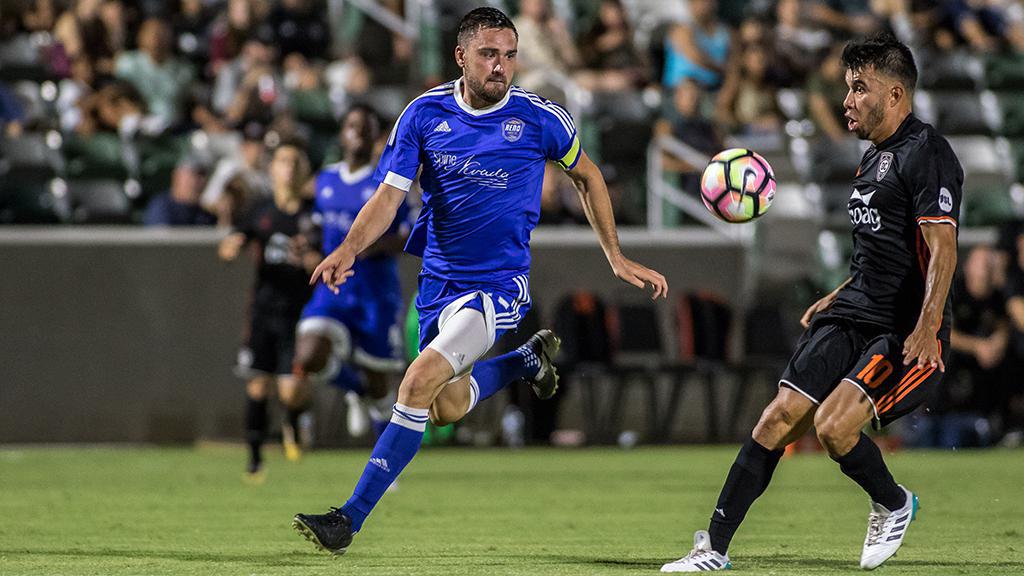 Plenty of individual results caught attention this week in the USL, but in the bigger picture those results created a certain amount of clarity in both conferences as the league enters the final six weeks of the regular season. And, as one team became the first to book its place in the postseason, the biggest result of the weekend made the route to the first silverware of the campaign just that little more interesting for fans at large.

1. CLEARING THE PATH: It’s seemed like the top four in the Western Conference was looking set in terms of which teams would play host to Conference Quarterfinals when the postseason arrives, but after this weekend’s results there’s little doubt remaining. With Reno 1868 FC taking its fifth consecutive victory by defeating Orange County SC, and the Swope Park Rangers getting back to form at home with a 2-0 win against OKC Energy FC, there now exists an eight-point game between fourth and fifth place. The gap isn’t as marked in the Eastern Conference, but the trend is there with the Rochester Rhinos moving past the Tampa Bay Rowdies into the top four thanks to its win against Toronto FC II. It may not be long before playoff tickets are on sale for a number of clubs.

2. REAL DEAL: Of the top four teams in the Western Conference, the mood of nervousness as to position was seemingly felt the strongest by San Antonio FC’s fans on Saturday night when the side fell behind against conference-leader Real Monarchs SLC. Those concerns were well-founded. After all the Monarchs had won 11 of 12 at home this season, and San Antonio had failed to take victory on the four previous occasions it had conceded the first goal this season. For all the concern, though, the team never seemed to take its eye off the ball. Chances that went begging for Cesar Elizondo and Omar Gordon could have seen SAFC’s heads drop a little as the second half went on, but the side’s dramatic comeback 2-1 victory seemingly strengthened the players’ resolve. The Monarchs may be in the playoffs, and still hold a solid lead in the race for the USL Regular Season Championship, but SAFC isn’t going to back away without a fight.

3. CHEMISTRY LESSON: With their playoff place secured despite Saturday’s loss thanks to OKC Energy FC’s defeat to the Swope Park Rangers earlier in the night, Real Monarchs SLC can now work on building itself up for a playoff run as it also seeks the previously-mentioned regular season title. With the new additions to the side starting to make their presence felt – Danny Cruz made his first start for the Monarchs on Saturday, while Juan Ignacio Mare and Diego Calvo came on as substitutes – incorporating the newcomers into an already-good squad is going to be a focus for Head Coach Mark Briggs. Suffering their first loss at Rio Tinto Stadium in the manner they did was a tough lesson for the Monarchs, but one they’ll surely learn from.

4. HIGH FIVE: Outside of the Monarchs, the team most disappointed to see San Antonio’s comeback victory was probably Reno 1868 FC, which had designs on moving up a second spot in as many weeks in the Western Conference after its two early tallies paved the way to a 3-1 victory against Orange County SC. While 1868 FC was forced to settle for third place after the weekend’s action, it won’t be too concerned after its attack continued to remain potent even with Dane Kelly absent on international duty – where he started for Jamaica in his debut against Canada earlier on Saturday night. With another three goals in the victory against OCSC, Reno is now only five goals from setting a USL single-season record, with plenty of games remaining to extend the mark.

5. WORTH THE WAIT: While the top two teams in the Western Conference squared off on Saturday, so did two of the top three teams in the Eastern Conference, and Louisville City FC emerged against the Charleston Battery to maintain their top spot in standings thanks to a less likely hero than normal. Holding midfielder Guy Abend’s 78th-minute winner was not only his first goal of the season, but also his first in more than a calendar year for the club. For a team that has spread its scoring around as much as Louisville this season – no-one from the club sits in the USL’s top 10 goal-scorers this season despite the side sitting fourth in the league in goals – it maybe shouldn’t as come as a surprise. That said, after notching five tallies a season ago, maybe Abend should be better at celebrating when he does find the net.

6. BUILT FOR SPEED: For a while, the race for the USL Golden Boot was looking like it was going to come down to the Jamaican duo of Reno 1868 FC’s Dane Kelly and the Charleston Battery’s Romario Williams. But with seven goals since the start of August after another two-goal outing in a 3-0 victory against the Richmond Kickers on Saturday the Charlotte Independence’s Enzo Martinez has surged into the conversation. Martinez’s brace allowed the Independence to pull away in a nice bounce-back win, and moved him level with Kelly on 16 goals for the season, doubling Martinez’s total from a season ago when he was a finalist for USL Most Valuable Player. The 26-year-old’s ability to find space between opposing lines has been key to his success, and has made him as much of a playmaker as scorer for Charlotte as it has reached 50 goals for the season. With the pace he’s on right now with six games to go in the regular season for the Independence, there’s even an outside chance we’re watching something historic, with Martinez only six goals behind Matt Fondy’s single-season record.

7. BULLS ON PARADE: Another Eastern Conference team that’s shown its ability to score in clusters has been the defending champion New York Red Bulls II, but until recently the side’s attack – which sits tied for fifth in the league with 42 goals – had been let down by its defense – which sits fourth with 45 goals conceded. There was a danger that would come back to haunt New York again on Saturday in its first meeting with the Tampa Bay Rowdies as Hunter Gorskie’s goal for the visitors at MSU Soccer Park cut the Red Bulls II’s lead to a single goal late on. A strong response from Junior Flemmings quickly erased any doubts that might have appeared, though, in a 4-2 victory. With 10 goals in their last three games, and a five-game undefeated streak, the Red Bulls II might be hitting the accelerator at just the right time.

8. TREADING WATER: The undefeated runs of the Red Bulls II and Orlando City B – who now sit seventh and sixth respectively in the Eastern Conference – have been aided by the manner which their fellow playoff contenders have been unable to put enough wins together to hold their advantage in the standings. Two such results stood out this weekend, with FC Cincinnati’s 1-1 draw with the Pittsburgh Riverhounds in front of 22,643 fans at Nippert Stadium keeping both teams precariously placed. Sunday’s 2-2 draw between Ottawa Fury FC and Saint Louis FC at TD Place, though, was even more of an equal disappointment for the two sides after both had held leads in the contest. For Ottawa in particular – which now sits with nine draws on the season, including six at home – the outcome of the season may rest in results like this.

9. DRAGGED IN: Sacramento Republic FC was on the verge of putting itself back into a comfortable position as it led Colorado Springs Switchbacks FC on Saturday night, but a stoppage-time goal by the visitors at Papa Murphy’s Park earned the Switchbacks a 2-2 draw and left the hosts still a little too close for comfort from the red line in the battle for the last four playoff positions in the Western Conference. Sacramento has been a streaky side this season, with the latest four-game winless streak stultifying the club’s hopes of a top-four position at the end of the season. Republic FC still has games in hand on the sides around it in the playoff race, but it will want to get the ship righted quickly if it’s to avoid some testing games in the home stretch.

10. STEPPING UP: As those around them faltered, Phoenix Rising FC was the major beneficiary as its 2-0 victory against Seattle Sounders FC 2 on Saturday night in front of 6,150 fans at the Phoenix Rising Soccer Complex to move into the top eight in the Western Conference. Phoenix’s five-game undefeated streak has been the most consistent of any side of late among the hopefuls looking to get into the postseason picture, and Rising FC is now 5-2-6 under the leadership of Patrice Carteron. Against S2, it was Carteron’s second-half substitutions that proved key in the win as Amadou Dia put home the game-winning goal with 12 minutes to go off a piece of play by AJ Gray, while a first home shutout for goalkeeper Josh Cohen capped off a performance that showed the team’s continued growth over the past month.

11. CRUNCH TIME: Phoenix sits with 10 games to go in its regular season, and appears to have found the rhythm it will need to reach the postseason. Its next opponent on Wednesday night, on the other hand, has hit a wall faced with a very similar circumstance. Orange County SC’s loss at home to Reno could be looked at as understandable considering 1868 FC’s current run, but it continued a seven-game winless streak that has put a lot of pressure on Head Coach Logan Pause’s side to produce in its final nine games. The window of opportunity hasn’t closed yet, but with the side having failed to score more than one goal in any contest since July 22, the margin for error creeps every closer.