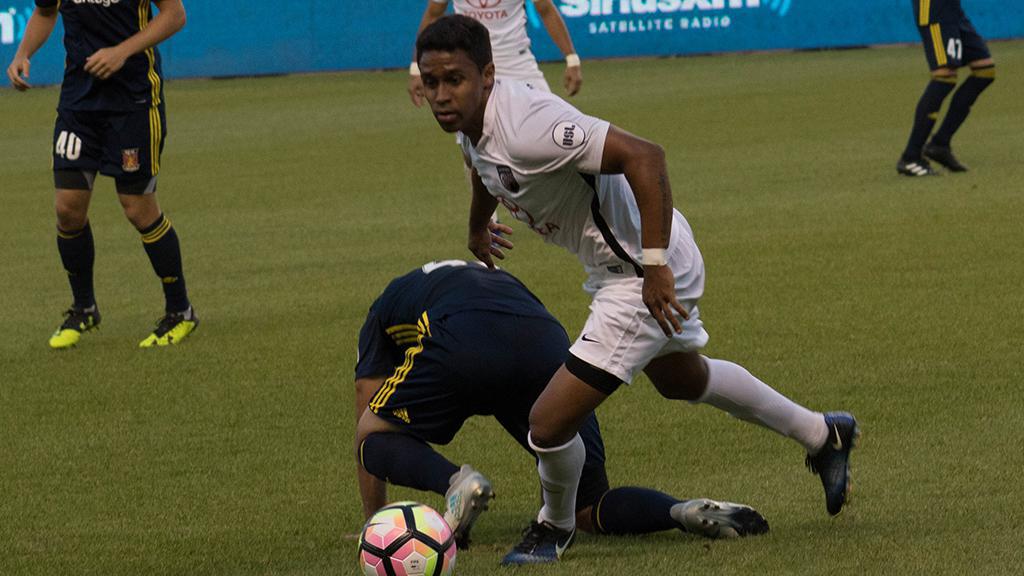 SANDY, Utah – When Sebastian Saucedo opened the scoring for Real Monarchs SLC on Saturday night at Rio Tinto Stadium, the omens weren’t good for San Antonio FC. After all, SAFC had yet to claim victory in four games when the side had conceded first, going 0-2-2 in previous instances this season.

But just as a serious challenge for the USL Regular Season Championship appeared to be slipping away, one of the most remarkable comebacks of the 2017 USL regular season saw SAFC score twice in the final five minutes to grab a 2-1 victory against the Western Conference leaders, and open up the possibility of a race to first silverware of the season.

“It’s been a challenge for us to come back when we get scored on first, so I think the resolve of the players was a commitment that we took on for the full 90 minutes,” said SAFC midfielder Michael Reed. “Our guys were smart at times in terms of fouls, and I think the commitment to get forward and drive and attack is something that had also been challenge. We can take some lessons from this, but the big one is that we stepped up and executed.”

As it had when the teams first met at Toyota Field, San Antonio was proactive in looking to attack on the road. That led to chances early, although the Monarchs began to take a stronger hold on the game as the first half progressed. When Saucedo deftly beat his man off a long pass forward by Charlie Adams 10 minutes into the second half to set up an excellent goal for the U.S. U20 international, it seemed to spell trouble for San Antonio; the Monarchs had won 11 of 12 games at home this season to open up a 10-point lead at the top of the Western Conference.

Just as Real had rallied back to earn a point in a 2-2 draw earlier in the season, though, San Antonio repaid the favor on Saturday. First a delivery with two minutes to go by Reed from the left deflected off the head of second-half substitute, although it appeared the final touch came from Monarchs defender Taylor Peay, making the equalizer an own goal. Reed’s deliver five minutes later then provided the winner, as defender Stephen McCarthy headed home to send the visitors into massive celebrations.

“I saw the ball coming in from Reed,” said McCarthy, “and I just thought that I needed to head it down and try to get it into the net.”

With back-to-back victories, and a game in hand on the Monarchs that could allow SAFC to cut the margin at the top of the standings to four points, San Antonio is now in with a chance at chasing down the Monarchs – who despite the loss became the first team to qualify for the USL Cup Playoffs thanks to OKC Energy FC’s defeat earlier in the night.

Given the resolve shown by the side to overturn its recent history on Saturday night, the race is on for Head Coach Darren Powell and his squad.

“We’ll think about this one for this evening, but we have to start preparing for the next one,” said Powell. “What we’ve been doing all year is making sure that we’re preparing ourselves correctly for the next match and that’s what we’ll continue to do.”