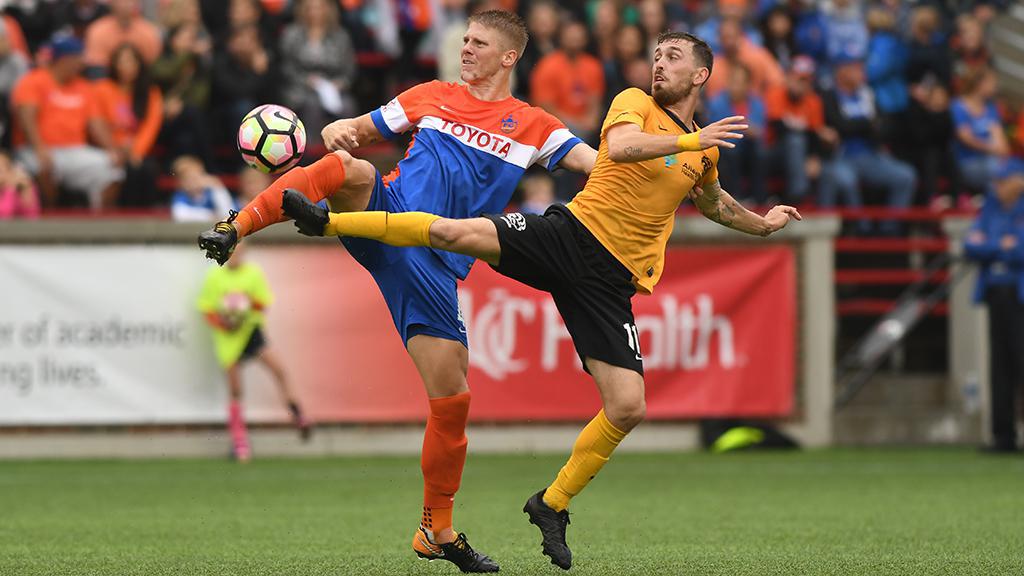 CINCINNATI – FC Cincinnati and the Pittsburgh Riverhounds played to a 1-1 draw in front of 22,643 fans at Nippert Stadium on Saturday night as the Riverhounds extended their undefeated streak to five games. The Riverhounds struck only three minutes in as Corey Hertzog scored his 11th goal of the season with a curling shot from 25 yards into the left corner. Riverhounds midfielder Romeo Parkes almost had a chance at a second, only to lose control as he bore in down the left, but then Cincinnati started to find more pressure. Riverhounds defender Tobi Adewole blocked a chance and cleared after a goal-mouth scramble in the 24th minute, and Jamal Jack made a good headed clearance after FCC’s Andrew Wiedeman had shrugged off a defender and had space on the right side of the penalty area. FCC tied the game through Wiedeman five minutes before halftime, however, as a deflection off a Riverhounds defender set up for a low shot to the right corner from 16 yards. Both Hertzog and Cincinnati’s Kenney Walker went close for either side early in the second half, while Wiedeman had a deflected shot skim the crossbar before going over. Wiedeman was also denied by a sliding challenge by Riverhounds defender Taylor Washington as he broke toward goal, while Hertzog sent a dipping shot just wide of the right post for the Riverhounds with 14 minutes to go. Djiby Fall almost put FCC ahead with three minutes to go, but the game ended even as the race for the playoffs for both remained tight.

Taylor Washington, Pittsburgh Riverhounds – Washington was strong at the back for the Riverhounds, making four interceptions, five clearances as Pittsburgh earned a point on the road.