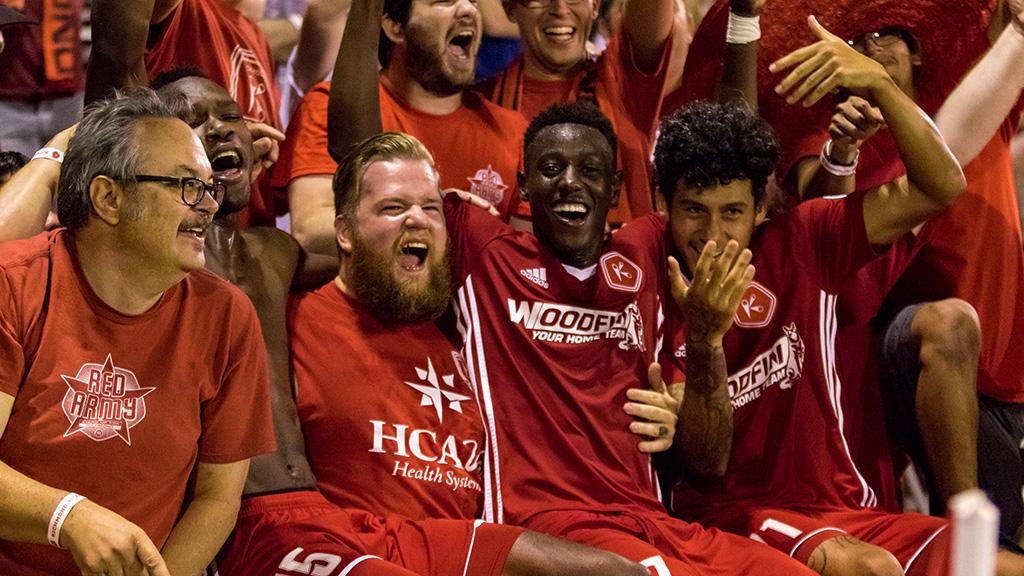 There were conventional results, for sure, but the past weekend in the USL regular season provided some of the most topsy-turvy outcomes of the season in a long time. Each of the top-three teams in the Eastern Conference suffered defeat, a boon for one team that closed the gap in the race for homefield advantage. The Western Conference went more to form but still left things very open in the race for the USL Cup Playoffs. A blip or a sign of things to come? We’ll find out very quickly.

1. STAND UP, KICK BACK: The Richmond Kickers’ season is unlikely to end in a postseason berth for the first time in the USL era as the side has struggled for goals throughout the season to sit in the bottom two of the Eastern Conference. That left the major motivator for the remainder of the season to try and spoil the plans of others, and a 3-1 victory against the club’s biggest rival in the Charleston Battery put a silver lining on what has otherwise been a disappointing summer at City Stadium. Despite an early deficit, the Kickers surged back behind a quality display by Sunny Jane and added another wrinkle to the race at the top of the Eastern Conference.

2. GOING H.A.M.: A little further south, something even more dramatic was unfolding at the Sportsplex at Matthews, where the Charlotte Independence looked firmly in control with a two-goal lead against last-place Toronto FC II. As if to prove that nothing is given in this world, a red card to Alex Martinez sparked a ferocious comeback for the visitors. Three goals in seven minutes, including a top-quality winner by Jordan Hamilton, gave Toronto just its second road victory of the season – its first since March 25. Independence Head Coach Mike Jeffries has emphasized that there are no gimmes this season. TFC II proved him correct.

3. LIONS’ ROAR: There was also some kind of shock at Slugger Field, where Orlando City B had two irregulars put in remarkable performances in a 3-0 victory against conference-leader Louisville City FC. Granted, the two-goal outing by Michael Cox we probably could have seen coming; the Canadian forward has had limited chances this season but did lead OCB with 11 goals a season ago. What stood out more what the outstanding performance by Jake Fenlason in only his second start of the season. An eight-save shutout as he filled in for Earl Edwards Jr. allowed Orlando’s undefeated streak to reach 11 games and might have turned some heads as to the threat the side might post when the USL Cup Playoffs arrive. 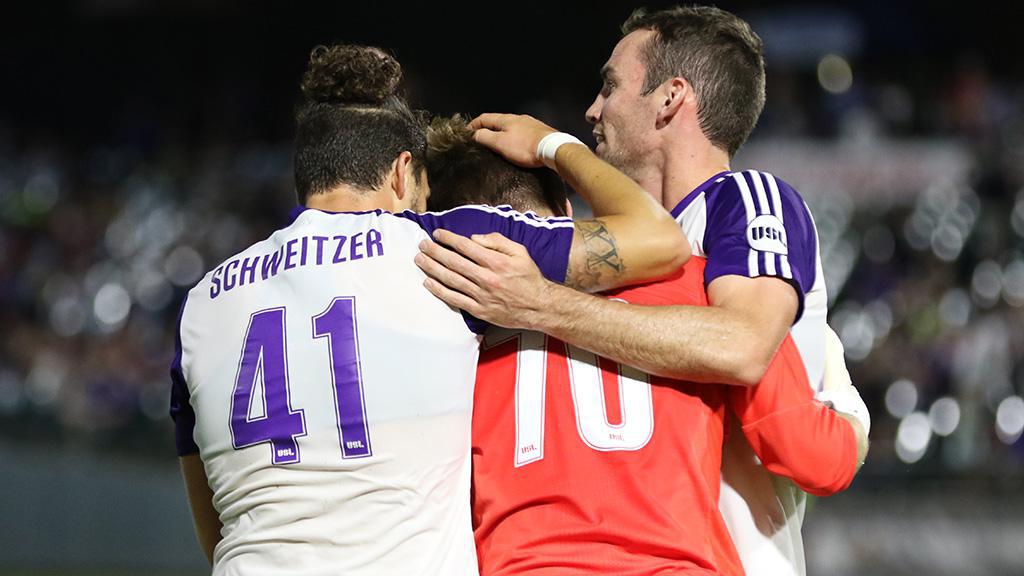 4. ON THE RAMPAGE: All three of those results made the Rochester Rhinos arguably the biggest winner of the weekend, with the side’s 2-1 victory against a 10-man Saint Louis FC pushing the side into the conversation for the top four with games in hand on all above. Ironically, the game couldn’t have gotten off to a worse start for Rochester, which was behind within three minutes thanks to Ryan Howe’s good free kick for STLFC, but the tide immediately turned in favor of the hosts as Saint Louis’ Seth Rudolph was sent off for a handball on the goal line, and Wal Fall converted from the penalty spot. From there, the Rhinos had to press hard against a resolute defense, but Jochen Graf’s winner hit the spot on what was a very satisfying Saturday results-wise for Head Coach Bob Lilley.

5. NEARING THE GOAL: There was a chance for Real Monarchs SLC to claim its place in the USL Cup Playoffs on Friday night, we’ll get to why they didn’t shortly, but the Western Conference leader held up its end of the bargain as it continued its majestic run at Rio Tinto Stadium this season with a 2-1 victory against Rio Grande Valley FC. Despite an early deficit, two excellent goals by Daniel Haber and Sebastian Velasquez lifted the Monarchs to victory and three points away from a postseason berth. The Monarchs are now 11-0-1 at home this season, a record that will be challenged by their next visitor, as second-place San Antonio FC visits this Saturday in the biggest game of Week 24. A win would not only cement the club’s postseason aspirations but also those of earning the USL Regular Season Championship as well.

6. SILVER STREAK: Alongside the Monarchs and San Antonio FC, the only team with a home record comparable in the Western Conference has been Reno 1868 FC. Facing the third in a string of major tests over the past three weekends, 1868 FC came through again as Antoine Hoppenot’s early penalty kick was enough to defeat the Swope Park Rangers at Greater Nevada Field and also hop over its visitors into third place in the Wednesday Conference standings. Reno’s 11-game undefeated run at home since falling in its inaugural contest has been an impressive one to follow and bodes well for a potential postseason run.

7. FALL OF REPUBLIC: Reno’s victory last weekend against Sacramento Republic FC is also looking like it provided another turning point in Sacramento’s season, with the side falling 3-1 on Saturday night to Phoenix Rising FC to bring its winless streak to three games. Republic FC hasn’t been good this season when trying to rebound from defeat and needed a late equalizer on Wednesday night to earn a point against the Swope Park Rangers at Papa Murphy’s Park. Visiting Phoenix with key players Jeremy Hall and Chris Christian back in the lineup, Republic FC couldn’t answer the questions posed by Rising FC’s attack, as Chris Cortez and Jason Johnson ran the show. Now only two points ahead of three teams sitting sixth through eighth in the Western Conference, arresting the most recent slide has to come quickly.

8. BURNING BRIGHTER: On the opposite side of Saturday’s game at the Phoenix Rising Soccer Complex, the belief that Phoenix Rising FC would be part of the USL Cup Playoffs kicked back into gear on Saturday night thanks to an impressive attacking display that didn’t feature Didier Drogba. Instead, it was the aforementioned Cortez and Johnson and Alessandro Riggi who led the way in the former Ivory Coast international’s second consecutive absence, with Cortez’s gaining confidence shining through as he notched a goal and two assists. “Sometimes when you have that kind of fantastic player like Didier, the other players don’t realize that also, themselves, they can prove that they are a good player,” said Phoenix Head Coach Patrice Carteron, whose side is now undefeated in four and three points out of sixth place with games in hand.

READ MORE: Cortez Puts the Pieces Together for Phoenix 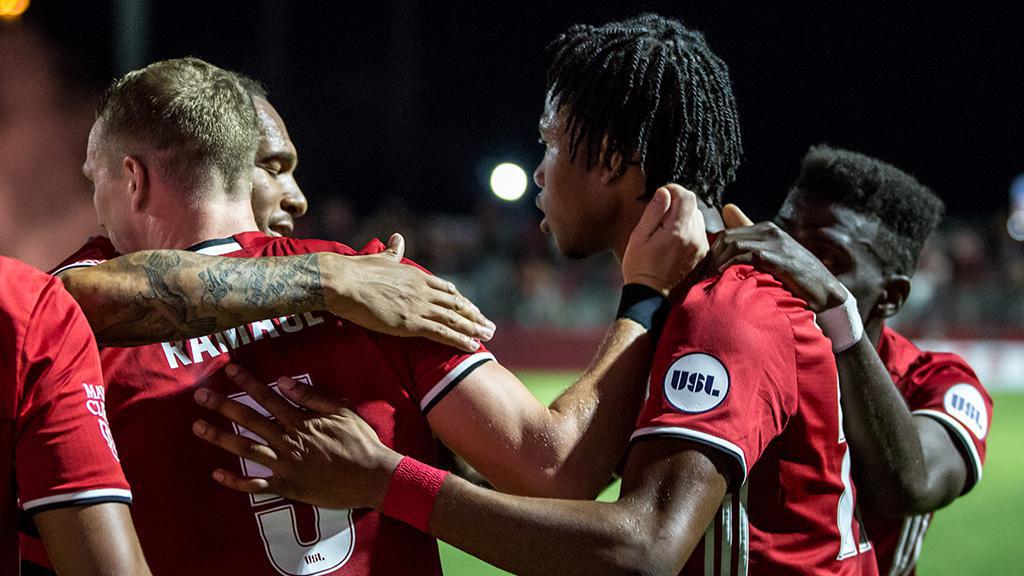 9. DIXON DOUBLE: Facing a similar opportunity as Phoenix on Friday night, Orange County SC was unable to come through, as a pair of unrelated players with the same last name paved the way for OKC Energy FC to take a 2-1 victory that could prove essential if it is to return to the postseason, as well as postponing Real Monarchs SLC’s celebration for a week. Alex Dixon and Richard Dixon combined for the opening goal, while Alex provided the ball that resulted in an own goal by OCSC’s Joe Franco that ended up being the winner. OKC Head Coach Jimmy Nielsen’s belief that his side holds its fate in its hands was backed up by its performance in Orange County, and while there’s still more work to be done, Energy FC’s form is that of a side that should make it.

10. RISE ON THE RIVER: The Pittsburgh Riverhounds knew going into Saturday’s game with Keystone State rival Bethlehem Steel FC that victory was almost essential to keep its push for the playoffs in high gear. After conceding a two-goal lead to their visitors at Highmark Stadium, as Jamaican international Cory Burke struck twice for Steel FC, the sort of break that had typically gone against the Riverhounds previously this year finally broke their way as Kevin Kerr found a winner after a remarkable sequence that saw Chevaughn Walsh’s header with 15 minutes to go hit both posts before Kerr bundled home the rebound off the left post. With two assists earlier in the game, raising his season totals to two goals and five assists, Kerr might also have experienced the breakthrough he needed after seeing so much just fail to connect previously.

11. OUT OF PLACE: It was so close to being different this time around for the New York Red Bulls II. Within sight again of a vital victory against Ottawa Fury FC at TD Place, however, the misfortune that seems to have accompanied the defending USL Cup champion on the road struck again. Ramon Martin del Campo’s 95th-minute equalizer to earn the hosts a 2-2 draw in front of 6,694 fans on Sunday afternoon didn’t provide much help to Fury FC’s own playoff chances, but it could prove a lethal blow to the Red Bulls II. A season after setting a USL record with 13 wins away from home, New York can’t seem to find the same magic. With five of its last seven games on the road, it doesn’t augur well.