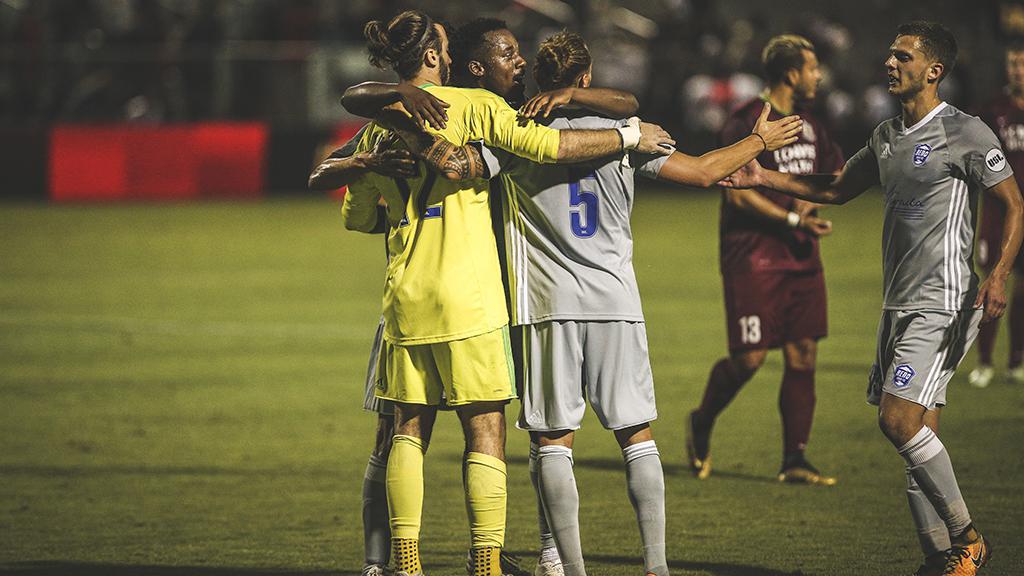 Bridging a gap at any time of the season is a tricky proposition, but as Reno 1868 FC has done its part getting consistent results in making a move toward the top three in the Western Conference, numerous other pieces have fallen into place, including the results the expansion side was hoping for in Week 22 of the 2017 USL regular season. The same can be said for Louisville City FC, which benefited from results elsewhere to add to its impressive road win, but further down the standings FC Cincinnati is seeing the other side of the coin as events in addition to results are starting to turn the wrong way.

1. SILVER SURGE: The signs were there, just over three weeks ago when Reno 1868 FC took a 4-1 victory away against the Swope Park Rangers, that while the gap between 1868 FC and the top three in the Western Conference standings was still substantial, it wasn’t insurmountable. While Reno hit a bump in the road in its next outing against OKC Energy FC in midweek, three successive victories since then have seen the club gain six points on the Rangers, and seven on second-place San Antonio FC since August 5 after 1868 FC’s 2-1 victory against Sacramento Republic FC. The manner of the win on the road against the club’s current biggest rival was impressive too, coming back from an early deficit to notch two excellent goals that stood as the final margin of victory. With a nine-point deficit to Swope Park now down to two, and the Rangers set to visit this Saturday night, the door is as open as it’s been for the expansion side to walk through.

2. RETURN TO FORM: Since that loss to Reno, the Rangers hadn’t quite looked themselves for any real measure of time until finally the breakthrough came in the second half of Friday night’s clash with Western Conference-leader Real Monarchs SLC. Trailing by a pair of goals, Swope Park’s introduction of Nansel Selbol and Kharlton Belmar turned the game on its head, allowing the hosts to earn a 2-2 draw at Children’s Mercy Victory Field that could have been a win if not for some resolute late defending. While the Rangers are now winless in four games, there was plenty to be optimistic about after the best 45 minutes the side has played this month, and the turnaround might have come just in time as Swope Park heads to visit Sacramento Republic FC on Wednesday, and then aforementioned Reno on Saturday in a tricky road trip.

3. KEEPING THEIR DISTANCE: As great as Swope Park’s comeback proved, it will likely have been disappointing for Real Monarchs SLC to only take a point from Friday night’s game after sitting in control at the halftime break thanks to a pair of fine finishes put the club close to adding even more distance between itself and any potential challengers for the USL Regular Season Championship. Daniel Haber’s free kick made everyone stand up and take notice, but despite holding the advantage in possession during the first half the Monarchs were unable to turn it into enough good chances to put the game away. As a result, when the momentum turned in the second half, the visitors were left to trying to hold off a Swope Park attack that was far more incisive in its play. The Monarchs still hold a substantial lead in the race for the first silverware of the season, but there were lessons to be learned as well.

4. MARKING THE WAY: Alongside Reno, Louisville City FC is the only other side to have currently won four of its last five games. The club’s 3-1 victory against Bethlehem Steel FC was hard-fought at Goodman Stadium, but showed off the quality that has provided the pathway to the top for City as other results fell its way over the weekend. Again at the forefront was Luke Spencer, whose two-goal performance again showed off his aerial prowess, but on Sunday evening it was Oscar Jimenez who stole the show as he continued his excellent season at left wing-back for Head Coach James O’Connor’s side. Add in a stellar performance by Greg Ranjitsingh, who is looking back to his best after some shaky moments a few weeks ago, and Louisville is in position to move into top spot in the Eastern Conference on Wednesday night when it plays host to the Harrisburg City Islanders.

5. ROARING BACK: We’ve seen double-digit undefeated streaks already this season, but none quite like that of Orlando City B, which set a new club record by going 10 games undefeated after a 1-1 draw with the Charlotte Independence on Saturday night at the Sportsplex at Matthews. OCB is 3-0-7 since earning a 1-0 victory against the Rochester Rhinos on June 23, including a six-game run of draws, but as in its fight for a playoff position last season, picking up points week-in and week-out has been enough to get the club into the eighth and final playoff position. The biggest test to Orlando’s undefeated run will arrive this Saturday as it visits Louisville City FC, but given the success the side has had on the road with a 5-4-4 away from home, it wouldn’t be a surprise if OCB’s momentum continued to roll on.

6. FROZEN OUT: The recent success of teams like Orlando City B has left FC Cincinnati in a precarious position, as the side’s run of three losses in the last four league games has pushed FCC outside the top eight in the Eastern Conference. What might be even more concerning for the side is the manner of the defeats the past two weekends, with the most recent seeing the New York Red Bulls II romp to a 4-0 victory at MSU Soccer Park on Saturday afternoon. Cincinnati clearly has the talent to be a playoff team, as evidenced by its run in the Lamar Hunt U.S. Open Cup, but the time for application has arrived with eight games to go in the season. If things don’t start well on Wednesday night against an Ottawa Fury FC side that is fighting for its playoff life as well, there could be some serious questions being asked around Nippert Stadium as to where this team’s collective head is at.

7. BULLS ON PARADE: On the flipside of Saturday’s game at MSU Soccer Park was the performance of the New York Red Bulls II, which has now won three consecutive home games and looks like it’s figured out a lot since its previous issues holding onto leads. The performances that immediately jumped out in Saturday’s victory were those of Stefano Bonomo, who notched his fourth goal in five games, and defender Noah Powder, who has brought added stability to the back line since turning professional with the club. What shouldn’t go overlooked, however, is the performance of central midfielders Andrew Tinari and Kazu Shigenobu, whose work-rate allowed New York to add to its lead even after the side had been reduced to 10 men. New York will end the season with six of its last eight games on the road, a major gauntlet for a side that doesn’t have much margin for error when it comes to the postseason. As sharp as the Red Bulls II are looking, it’s not a task that appears beyond them.

8. HOME SWEET HOME: With 11 games to go in the season, the margin for error is wide for Orange County SC in its pursuit of a place in the USL Cup Playoffs, but while the club would have certainly preferred a late victory as it opened Champions Soccer Stadium officially on Friday night against Phoenix Rising FC, the 1-1 draw in front of a sellout crowd provided a memorable ending to a big night for the club. Ironically, it was former Orange County player Chris Cortez who scored the first goal in the venue’s history, giving Phoenix an early lead, but second-half substitute Sola Alobaji’s goal with a minute to go gave the crowd something to cheer about. Orange County’s results will need to improve, the side has drawn four of its last five games and is winless since July 29, but the feeling of optimism should carry things forward with the door to the postseason still wide open.

9. WINDOW OF OPPORTUNITY: Seeing Friday night’s draw between Orange County and Phoenix provided a silver lining for Colorado Springs Switchbacks FC, but if the side fails to reach the postseason for a third successive season, its 2-1 loss to the LA Galaxy II on Friday night at Weidner Field will stick out as a result that needed to be different. The Switchbacks failed to capitalize on good opportunities to take the lead in the first half, but still had a chance to emerge with a point thanks to Aaron King’s goal with 13 minutes to go. Instead, an ill-advised attempt to intercept a low cross from the left saw Switchbacks defender Sean McFarlane turn the ball into his own net for the deciding goal. Colorado Springs still has seven games remaining, but its fate is certainly not in its own hands anymore.

10. DOWN THE RIVER: The trend for the Pittsburgh Riverhounds has been to earn a place in the USL Cup Playoffs in every odd-numbered year, and after Saturday’s 2-1 victory against Saint Louis FC at Toyota Stadium – Saint Louis the chances for that to continue were raised substantially after a tale of two penalty kicks decided the contest. Corey Hertzog’s outstanding free kick to get the Riverhounds back on level terms set up an exciting second half, but when Saint Louis was awarded a spot kick after a foul by Pittsburgh goalkeeper Trey Mitchell, the pendulum appeared to be swinging back toward the hosts. Mitchell made up for his error by denying Louis Bennett with an outstanding save, and six minutes later Hertzog showed how it was done as STLFC goalkeeper Adam Grinwis dived early, leaving the center of the goal vacant, and the Riverhounds’ playoff hopes alive.

11. BREAKING GOOD: Entering Saturday’s game on the road against the Rochester Rhinos – at a venue the club hadn’t won at since 2012 – the Charleston Battery were likely wondering what it was going to take to break a seven-game winless streak. As it turned out, it was a big slice of good fortune that saw Justin Portillo’s free kick and an onrushing group of attackers that froze Rhinos goalkeeper Dan Lynd that broke the Battery out of their funk, and re-established the side as a contender for a top-four position at the end of the season. Charleston hasn’t played tremendously over its recent downturn in form, but you could make a good argument the side hasn’t had the breaks go its way. Saturday’s winner could be a sign that’s about to change, and if so, it arrived just in time for a big stretch run.