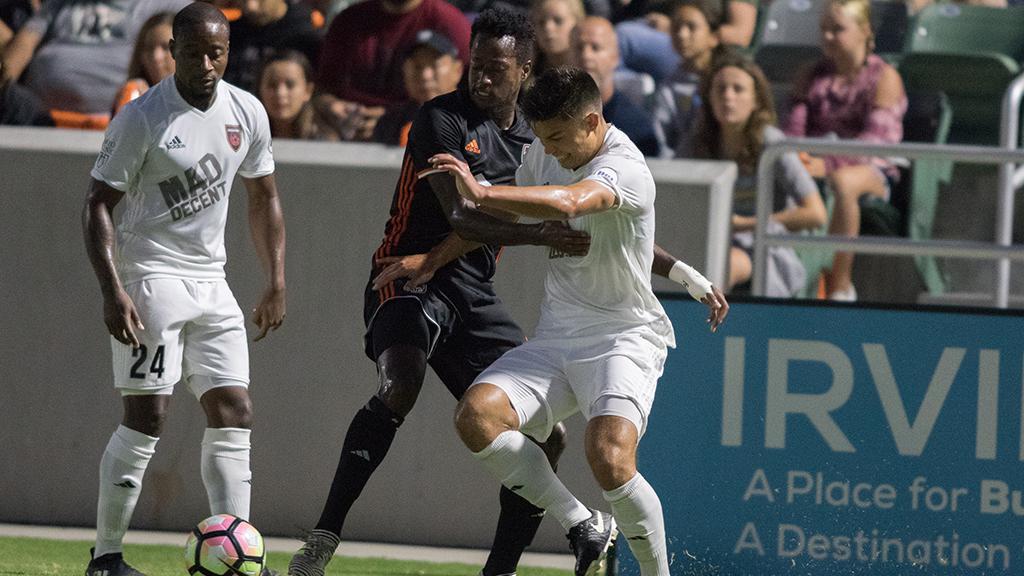 IRVINE, Calif. – Sola Abolaji scored an 89th-minute equalizer as Orange County SC played to a 1-1 draw with Phoenix Rising FC and welcomed a sellout crowd of 4,963 to the official opening of Champions Soccer Stadium on Friday night. Wuilito Fernandes went close to giving OCSC the lead in the 11th minute as his header from a near-post corner from the left went just wide, and three minutes later Jerry van Ewijk forced a good save by Phoenix goalkeeper Carl Woszczynski to tip wide of the right post. Rising FC took the lead in the 18th minute, however, as Chris Cortez capitalized on a goalkeeping error by Charlie Lyon and put home the first goal in the new stadium’s history. Orange County pressed for an equalizer before the break, but gained a one-man advantage in the 43rd minute when A.J. Gray was sent off for a hard challenge on Juan Pablo Ocegueda to reduce Rising FC to 10 men. OCSC’s first good chance to take advantage came in the 59th minute as Van Ewijk momentarily got in behind the defense, but his curling effort was cleared off the line by Phoenix’s Peter Ramage, and Phoenix’s defense did just enough to clear James Baxendale’s low cross moments later as the hosts threatened again. Orange County finally earned an equalizer with a minute to go, however, as Van Ewijk’s cross found Abolaji by the left post for a headed finish. OCSC then pushed in stoppage time for a winner, with Jeannot Esua’s chance blocked to safety, but Rising FC held on to earn a point as honors ended even between the clubs for a second time this season.

Jerry van Ewijk, Orange County SC – Van Ewijk was a threat throughout the contest, and provided a perfect assist for Sola Abolaji to notch a late equalizer.