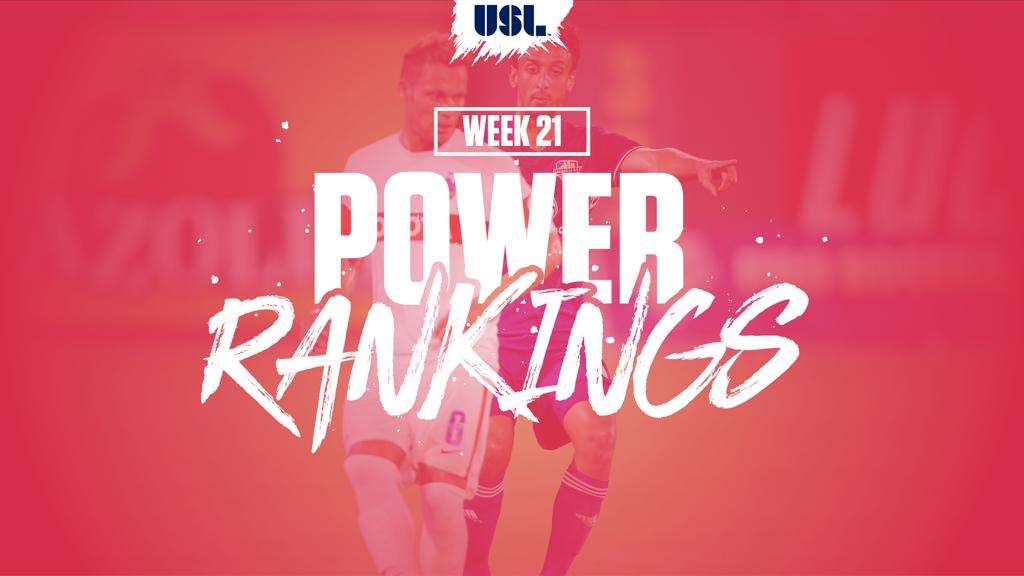 After a week off the top spot, Real Monarchs SLC rode the wave of a 2-0 victory against Colorado Springs Switchbacks FC on Saturday night at Rio Tinto Stadium back to the top of the USLSoccer.com Power Rankings this week, with the presumptive favorites for the USL Regular Season Championship now closing in on not only clinching a first playoff berth but also potentially some records.

With 10 games to go in the regular season, the Monarchs now only need nine points to guarantee a playoff berth. With a big enough finish to the season, the side could also etch itself into the record book as it sits only five wins behind the New York Red Bulls II for the most wins in a regular season (21) and 18 points off the Red Bulls II’s total of 69 a year ago.

The Monarchs will have competition for the most goals in a single season, with Reno 1868 FC now only 10 goals back of New York’s 2016 total of 61, but individually, Chandler Hoffman has the chance to add the USL Golden Boot to his accomplishments in the league after equaling his 14-goal total from a season ago in Louisville to move within one tally of both Reno 1868 FC’s Dane Kelly and the Charleston Battery’s Romario Williams.

Reno, meanwhile, slides into a tie for second in the rankings alongside Louisville City FC, with both teams taking impressive home victories on Saturday night. It’s going to take a lot for anyone to catch the Monarchs for the first silverware of the season, though, as they sit 10 points clear of the competition.

The five-person USLSoccer.com voting panel tabulates 10 points for first-place team votes, nine points to the second-place team and so forth to one point for 10th place. The accrued points among the group determines the final ranking.

1. Real Monarchs SLC (48pts)
Last Week: W 2-0 vs. Colorado Springs Switchbacks FC
The Monarchs got back to what’s made them the standout team in the USL this season with a victory against the Switchbacks – a win that looked all the more impressive considering Colorado Springs’ demolition of Orange County SC earlier in the week. The Monarchs are on course to become the first side to clinch a place in the playoffs, which depending on results further down the standings, could arrive before the end of the month.

T-2. Louisville City FC (40pts)
Last Week: W 5-0 vs. FC Cincinnati
Last week, we asked if Louisville could replicate its feat of rebounding from a loss with a win for the fourth time this season. On Saturday, the side answered in emphatic fashion on a historic night for the club as it welcomed a club-record 13,812 fans to Slugger Field and defeated its biggest rival 5-0. Louisville now has the inside track to the top of the Eastern Conference standings after Charlotte’s tough week, which could ensure the path to the USL Cup Final in the Eastern Conference goes through one of the toughest places to play in the league. 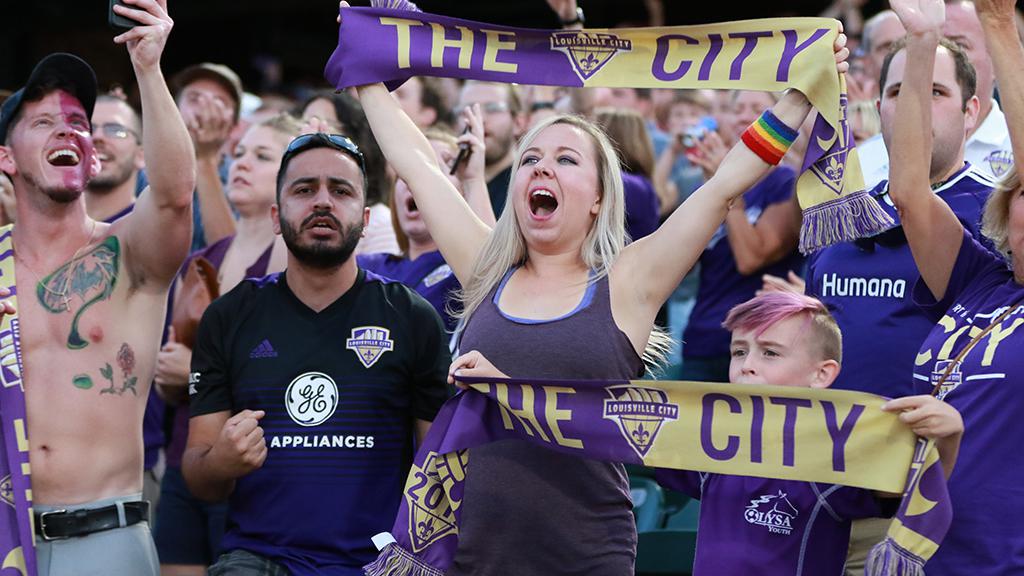 T-2. Reno 1868 FC (40pts)
Last Week: W 2-0 vs. San Antonio FC
It’s taken a lot to get three points from San Antonio this season, but Reno became only the second side to do so on Saturday, as it got a good amount of revenge for its loss at Toyota Field earlier this season. Reno is undefeated in 10 games at Greater Nevada Field now, and with games against Sacramento Republic FC and the Swope Park Rangers coming next, could put itself in position to host at least one home game in the playoffs with the right results.

4. Charlotte Independence (33pts)
Last Week: D 2-2 at Toronto FC II, L 3-1 at Ottawa Fury FC
The Independence saw their undefeated run end at 12 games in two tough games north of the border but still sit in good position in the Eastern Conference. The team will need to get Saturday’s win out of its system quickly, though, as both Bethlehem Steel FC and Orlando City B visit the Sportsplex at Matthews this week in good form.

5. San Antonio FC (29pts)
Last Week: L 2-0 at Reno 1868 FC
San Antonio’s hopes of reeling in Real Monarchs SLC by the end of the season took a major blow thanks to its loss against Reno, and now the side will likely have to focus on ensuring a second-place finish from the teams sitting just below it. A visit to an OKC Energy FC side that will be desperate for victory in its push for the playoffs promises to be no picnic this Saturday, either.

6. Sacramento Republic FC (21pts)
Last Week: W 1-0 at Portland Timbers 2
Another week, another 1-0 victory against a Cascadia club that sits outside the playoff race. Sacramento is certainly getting it done in the results department but will also be aware it needs to be better as Reno 1868 FC comes to town on Saturday for a pivotal clash between the two rivals. 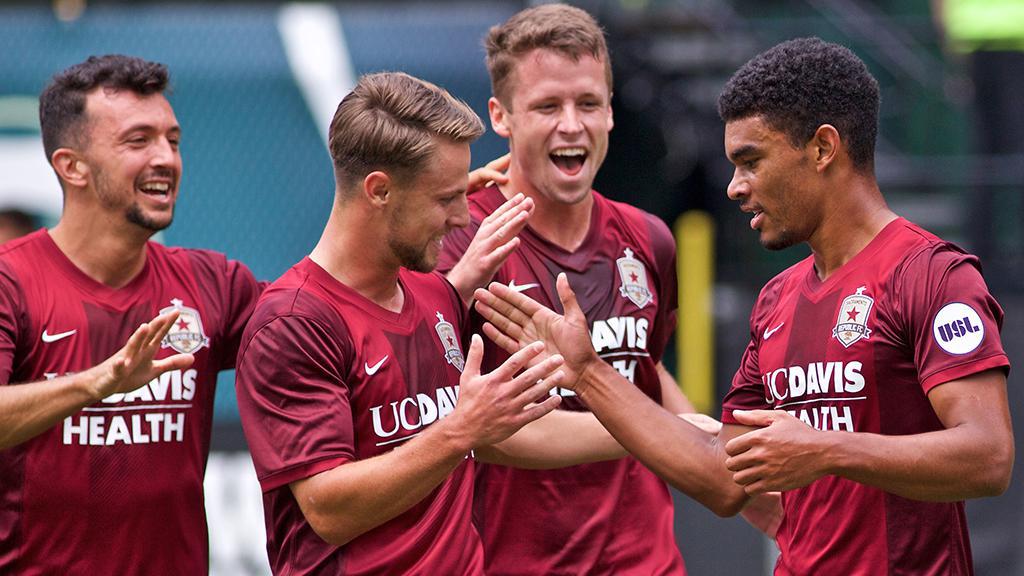 7. Swope Park Rangers (20pts)
Last Week: D 1-1 vs. Orange County SC
The Rangers missed out on a big chance to move into second in the Western Conference as it lost an early lead against Orange County SC. The side is now winless in its last three games, and with the Monarchs coming to town on Friday night, really needs a win if its chances at a regular-season title are to remain alive as it sits 11 points back with 11 games to go.

8. Tampa Bay Rowdies (16pts)
Last Week: L 4-3 at Saint Louis FC
The Rowdies scored three goals for a second successive game, but this time, it wasn’t enough for three points as Saint Louis rallied late to take victory. Tampa Bay has now won only once in 11 games away from Al Lang Stadium this season. If it can’t improve that record over its last five road contests, there’s a good chance there won’t be a home playoff game in the Eastern Conference Quarterfinals to look forward to when the postseason arrives.

9. Charleston Battery (14pts)
Last Week: D 1-1 vs. New York Red Bulls II
The Battery saw their winless streak reach seven games thanks to a draw against the Red Bulls II, with the visitors likely thinking they did enough to grab all three points at MUSC Health Stadium. The Battery remain in the top four in the Eastern Conference, but with a visit to the Rochester Rhinos on the slate for this Saturday, that might not last much longer.

10. Tulsa Roughnecks FC (6pts)
Last Week: W 2-1 vs. Saint Louis FC; W 2-1 vs. OKC Energy FC
The Roughnecks’ sweep of its two home games this week not only gave the club’s playoff prospects a massive boost, but also claimed the Black Gold Derby for the first time to the delight of the Roustabouts. With another game on Tuesday night against Orange County SC right around the corner, Tulsa may look to empty the tank a little with a weekend off to follow as a road victory would solidify even further the chances of a first postseason berth.