A new leader in the East, and the West sees some separation 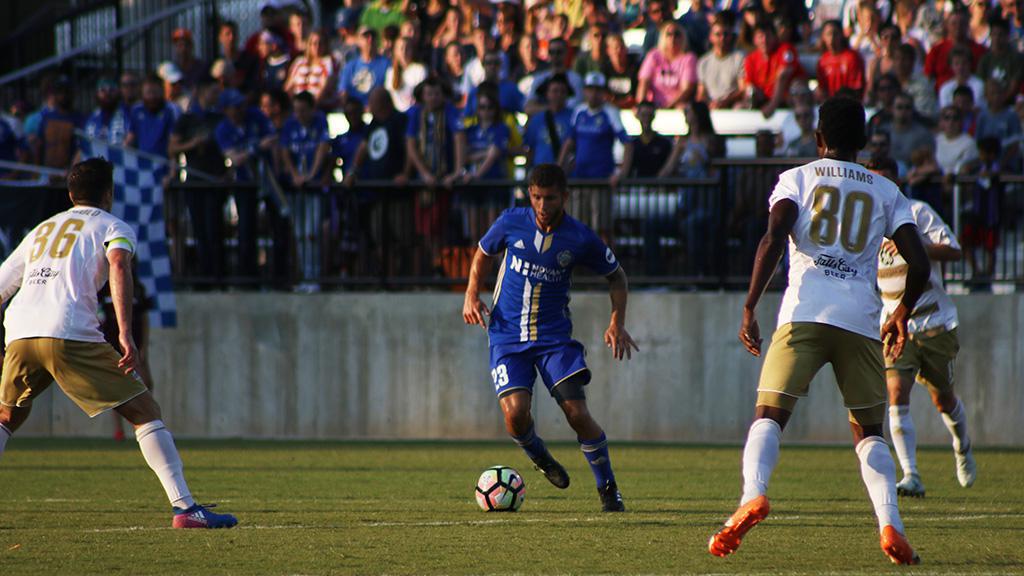 The 2017 USL regular season is officially two-thirds complete after the past weekend of action, and there’s a new leader at the top of the Eastern Conference after a remarkable day of action at the Sportsplex at Matthews. In the Western Conference, the standings began to split into three as the chase for the playoffs continue, with two road victories maybe the most important of the weekend’s action overall.

1. TOP OF THE CLASS: There was plenty of anticipation ahead of Saturday’s game between the Charlotte Independence and Louisville City FC, which was only heightened after a top-quality PDL Championship that had preceded it with the Charlotte Eagles notching two highlight-reel goals to earn the title. The man of the hour, though, proved to be Enzo Martinez, whose hat trick in a 3-1 victory saw him elevate the Independence to the top of the Eastern Conference standings in a display that highlighted his finishing as he moved into a tie with Jorge Herrera for the team-high with 12 goals. Herrera’s absence might have hindered the Independence on another day, but the team’s versatility came through in a big way against a defense that had been solid throughout much of the season.

2. SPOILER ALERT: The Independence knew they had a chance at first place going into Saturday’s showdown after the Charleston Battery’s recent slide in form continued earlier in the day against Toronto FC II. The Battery’s winless streak was extended to six games thanks to a 1-0 victory for Toronto, which defended well and saw the outstanding young talent of Shaan Hundal provide the goal to decide the game. Recently named the No. 4 player in the 2017 USL 20 Under 20, Hundal’s year to date has been a trying one thanks to injury, but his finish on Saturday was a moment of class that again highlighted his major potential and left the Battery flat.

3. FEAR THE BEARD: Tampa Bay Rowdies goalkeeper Matt Pickens made his 100th appearance for the club on Saturday night, and as a present, the rest of the team almost managed to get the veteran a night off. Pickens did have to make a pair of saves to record a shutout in a 3-0 victory against the Harrisburg City Islanders, but the performance was one that pushed the Rowdies back into the conversation for top spot in the USL Eastern Conference, now level on points with Charleston in third place, two points back of Charlotte. The Rowdies are now 4-0-0 in their last four games at Al Lang Stadium, and have outscored opponents 9-0 in the process. Tampa Bay needs to up its road form and will visit Saint Louis next weekend with that in mind, but right now, no one will be looking forward to a trip to Florida when the playoffs arrive if the Rowdies are in this sort of form.

4. BOLT FROM THE BLUE: It’s debatable what the biggest result in the USL’s Western Conference was this past weekend. What isn’t is which moment shone brightest over the weekend’s action. Didier Drogba’s superlative free kick for Phoenix Rising FC from 40 yards against the LA Galaxy II went around the world at the speed of Twitter, highlighting the quality the former Ivory Coast international still brings on the field. As big as the moment was, though, the win was just as big for a Rising FC side that had lost two consecutive outings to ding its pursuit of the postseason. A solid 2-0 victory that saw Phoenix get out-possessed but do more with the ball when its chances arrived, got the team back on track as other results fell Rising FC’s way on Saturday night. 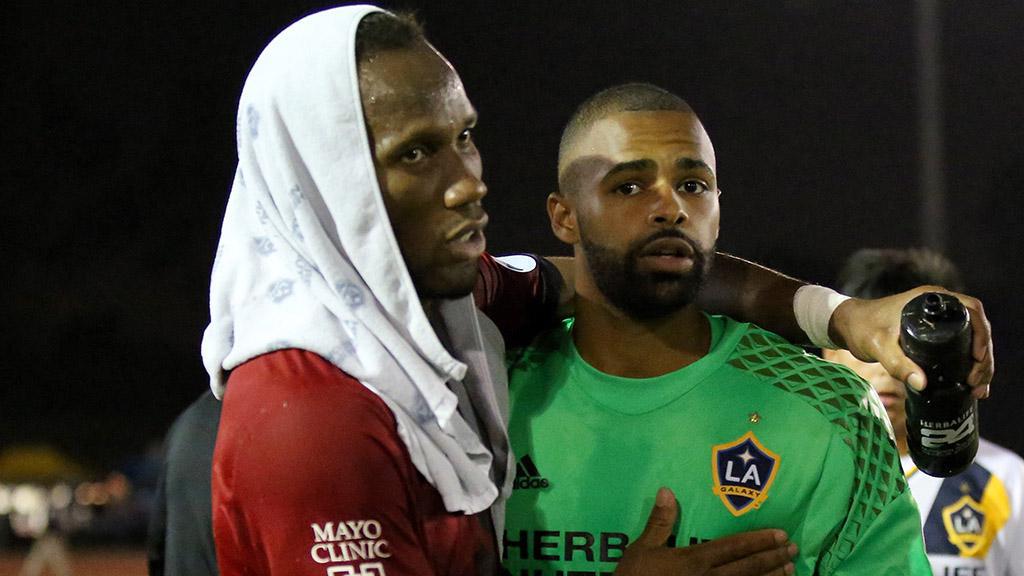 5. MIND THE GAP: The other major road victory in the Western Conference on Saturday night saw Reno 1868 FC let a two-goal lead slip against Tulsa Roughnecks FC, only to salvage a 3-2 victory, thanks to Chris Wehan’s 84th-minute goal at ONEOK Field, that kept the side in fourth place in conference standings. Reno’s resilience after a grueling road trip through the Midwest over the previous week was admirable, as Brian Brown in particular came to the fore. The Jamaican’s work rate played a role in two of 1868 FC’s three goals against Tulsa. Reno is now six points out of a top-three position with 12 games remaining, and with a return home to face second-place San Antonio FC on Saturday night at Greater Nevada Field up next, the chance to close the gap is waiting.

6. MIDDLE TIER: While Reno may be looking upward, it is firmly in a middle tier in the Western Conference that created a little bit of separation from the sides around the playoff line with some impressive, and some less than impressive, victories this weekend. Maybe the most impressive win in the conference over the weekend was that of OKC Energy FC, which stifled Real Monarchs SLC’s attack in a 2-0 victory at Taft Stadium to put three points between themselves and both the Roughnecks and Orange County SC. Colorado Springs Switchbacks FC also romped at home, taking a 4-1 win against the Portland Timbers 2 for a second successive win, and while Sacramento Republic FC looked rusty in front of goal against Vancouver Whitecaps FC 2, the hosts did enough in front of another sellout crowd at Papa Murphy’s Park to take home a 1-0 win. All four sides sitting fourth through seventh in the standings still have work to do, but as history has shown, it’s usually better to have points in your pocket than games in hand.

7. ORANGE CRUSH: The team that still has the most games in hand of anyone in the Western Conference is Orange County SC, with four games fewer played than seventh-place OKC and five fewer than sixth-place Colorado Springs, who incidentally OCSC takes on this Tuesday night in a massive game for both teams. Orange County’s tenacity saw it earn a 1-1 draw with San Antonio FC on Saturday night thanks to Jerry van Ewijk’s stoppage-time penalty kick, earning a point on the road you expect the side would be glad to have taken. Getting a win against the Switchbacks before heading back on the road to take on the Swope Park Rangers is now imperative for OCSC.

8. PAYING THE PENALTY: San Antonio, on the other hand, almost certainly had done enough to earn victory against Orange County on Saturday at Toyota Field, but allowing the visitors to hang around late ended up seeing the hosts pay the penalty, literally. What made the result more disappointing was the result from further north, where OKC Energy FC defeated Real Monarchs SLC, and could have allowed San Antonio to reduce the gap at the top of the conference to five points with a game in hand. Instead, the side finished with only four shots on goal out of its 18 shots total and again saw a late goal take victory away when the visitors should have been put away themselves sooner. 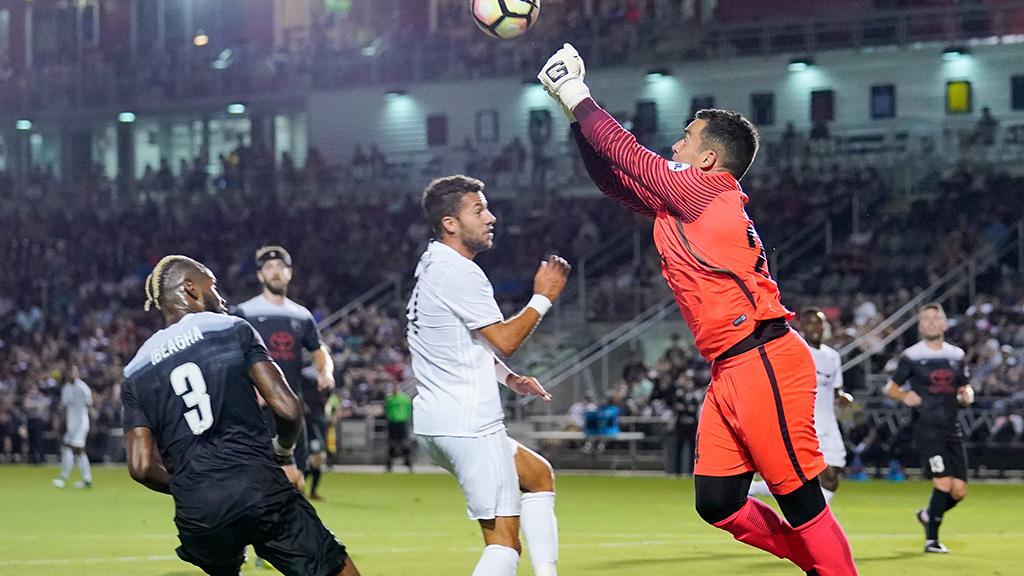 9. ON THE RAMPAGE: With everything they’d accomplished in two seasons, the New York Red Bulls II hadn’t been able to cross the achievement of defeating the Rochester Rhinos in regulation off their list. Sure, there was the penalty shootout victory in the USL Cup Playoffs a season ago, but that’s technically a draw, so when the Rhinos scored with almost the final play of the game to earn a draw earlier this season at Capelli Sport Stadium, the feeling that Rochester had some kind of hex over New York grew. On Saturday, that hex was broken as Stefano Bonomo’s goal and assist led the way to a 2-1 victory that saw no late magic for the visitors at MSU Soccer Park and boosted the defending champions’ playoff hopes.

10. MOAR GOALS: Going behind early on the road to a major slice of misfortune, Bethlehem Steel FC got a major test of its playoff credentials on Saturday night against Ottawa Fury FC at TD Place. After back-to-back defeats, the side came through with flying colors for a 2-1 victory as goals by Chris Nanco and a winner with nine minutes to go by Santi Moar – on the same day as his former club claim the PDL Championship – bolstered Steel FC’s playoff hopes against one of its biggest rivals for a postseason position. Bethlehem’s performance wasn’t the cleanest it has produced this season, but this time of year, that won’t matter much to Head Coach Brendan Burke, whose side took some serious pressure off as it returned home.

11. RAISE THE BAR: There’s been so much written about what FC Cincinnati has brought in terms of attendance, it can be hard to find a new angle for the remarkable success the side has seen at the box office over the past 18 months. At Saturday’s Fan Appreciation Day, though, the side managed to, as its crowd of 25,308 not only raised the USL regular-season attendance record once again but also proved Saturday's highest-attended professional soccer game in the United States and Canada. That was no mean feat, considering the 29 games across the four professional leagues in North America was the most ever on a single day in the sport’s history. Danni Konig’s late equalizer against Orlando City B also ensured the fans didn’t go home disappointed, either, as FCC capped off a remarkable week with another valuable point.