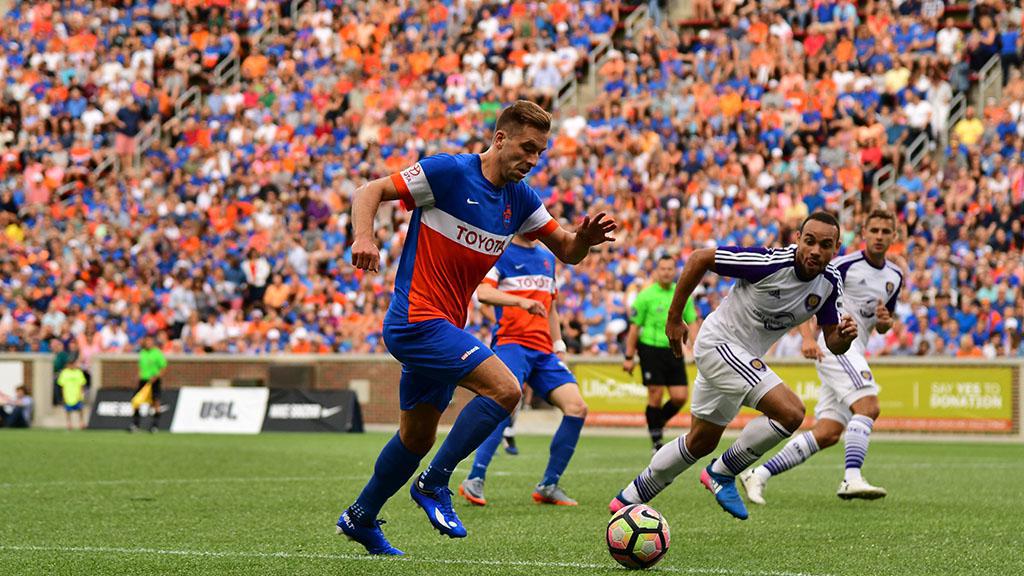 CINCINNATI – A USL regular-season record crowd of 25,308 saw Danni Konig score in stoppage time to earn FC Cincinnati a 2-2 draw with Orlando City B on Saturday night at Nippert Stadium. Cincinnati took the lead in just the sixth minute as Kyle Greig headed home a cross from the left by Josu at the top of the six-yard area. Two minutes later, Greig was pulled down going for a cross, and FCC was awarded a penalty kick, but Orlando goalkeeper Earl Edwards Jr. saved from Aodhan Quinn as he shot to the left corner. OCB then leveled the score as a long throw-in was headed to the top of the area, and Austin Martz volleyed into the left corner of the net. The teams then exchanged chances, as Hadji Barry almost gave OCB the lead moments later, heading a free header wide from eight yards out, while FCC’s Jimmy McLaughlin had a big chance saved by Edwards in the 26th minute. OCB’s Pierre da Silva forced a good save by FCC goalkeeper Mitch Hildebrandt six minutes later, but the visitors took the lead 10 minutes into the second half as Barry finished calmly on a breakaway as FCC got caught pressing upfield. Cincinnati pushed hard for an equalizer in the final half-hour, and a low cross flashed through the penalty area just eluded the finishing touch from Greig at the far post. FCC found its equalizer in the second minute of stoppage time, however, as Konig got onto the end of Kenney Walker’s cross, and looped his finish home.

Kyle Greig, FC Cincinnati – Greig scored the opening goal of the game, and was Cincinnati’s most consistent threat as the side managed to grab a late point.