The race in the East tightens, while road wins liven up the West 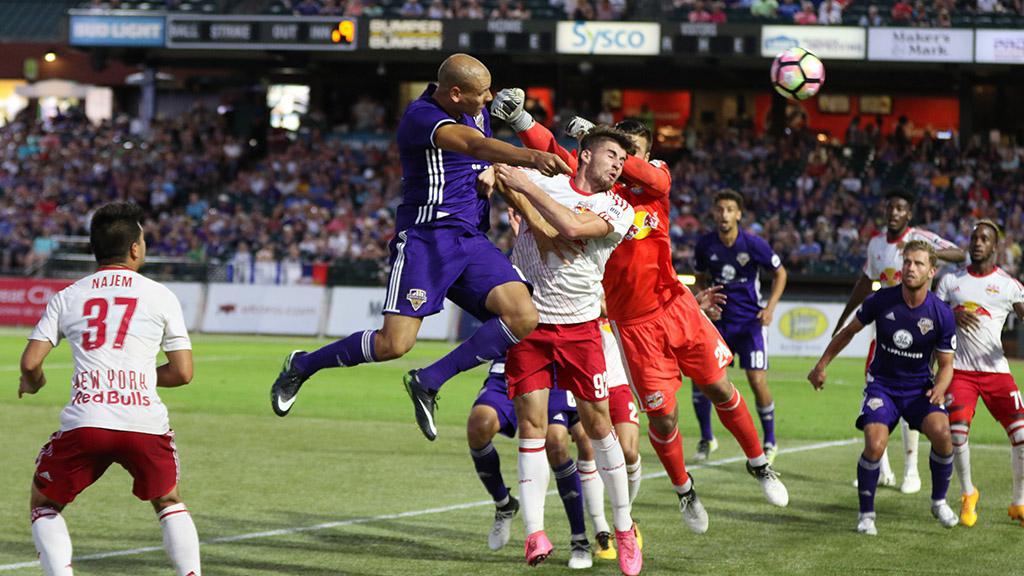 One streak continued in emphatic fashion, while another came to a screeching halt, as Week 19 of the 2017 USL season brought a sequence of decisive results that leave things in the Eastern Conference particularly hanging nicely in the balance at the top of the standings. With just three points separating the teams in the top four spaces in the USL Eastern Conference, the stretch run is looking particularly fascinating, especially with two of the main contenders set to square off this week.

1. SPENCER FOR HIRE: Luke Spencer didn’t get quite the level of attention as some others arriving at Louisville City FC this offseason, but on Saturday night he again proved the value he’s brought to the side as his immediate impact off the substitute’s bench gave City an invaluable 2-1 victory against the New York Red Bulls II in front of 10,017 fans at Slugger Field. Spencer’s goal less than a minute after his introduction from Paolo DelPiccolo’s corner kick from the right saw him use his powerful frame perfectly, and earned Louisville the points they needed to stay right in the middle of the race for first.

2. ON THE UP: Louisville’s Slugger Field has become somewhat of a fortress since the club’s inception, with the side’s loss to FC Cincinnati two weeks ago its first in almost a year, and coming in front of a record attendance. By providing the second-highest attendance of the season on Saturday, the club’s fans, led by the Louisville Coopers, illustrated again why that’s been the case. Louisville’s raucous atmosphere has time and again raised its players when it has needed it most. “I was impressed last year, but this year even more so,” said defender Paco Craig after Saturday’s game. “The fans really get behind us. They come out in their numbers and support us, and it really lifts the team a lot.” If anything’s for certain, it’s that the club’s proposed soccer-specific stadium in Butchertown can’t arrive soon enough.

3. HITTING THE DOUBLE: While Louisville was recording its second consecutive victory, its next opponent – the Charlotte Independence – was continuing its outstanding run of form with an emphatic 4-0 win against Bethlehem Steel FC that extended the club’s undefeated streak to 10 games. The Independence struck early and often thanks to Lewis Hilton, with the English midfielder notching two of the goals at Goodman Stadium. Now alone in second place, and just a point behind the Charleston Battery with two games in hand, the Independence’s game with Louisville is now looking realistically like the one that could see either side take control of the Eastern Conference race.

4. ROWDIES REASSERTION: Charlotte and Louisville are in prime position to take top spot in the East from the Charleston Battery – whose recent slide in form continued in a 0-0 draw on Saturday with Orlando City B – but the Tampa Bay Rowdies’ claim as a contender shouldn’t be discounted. After a second successive 2-0 win at home, this time against the Pittsburgh Riverhounds, Tampa Bay has fewer games remaining, but is looking like the side that was riding high early in the season again. The emergence of Alex Morrell as an effective option alongside Joe Cole, Georgi Hristov and Martin Paterson in the side’s attacking group has provided a major jolt to the Rowdies, who are now undefeated in four, and lying in wait should others see their momentum stall. 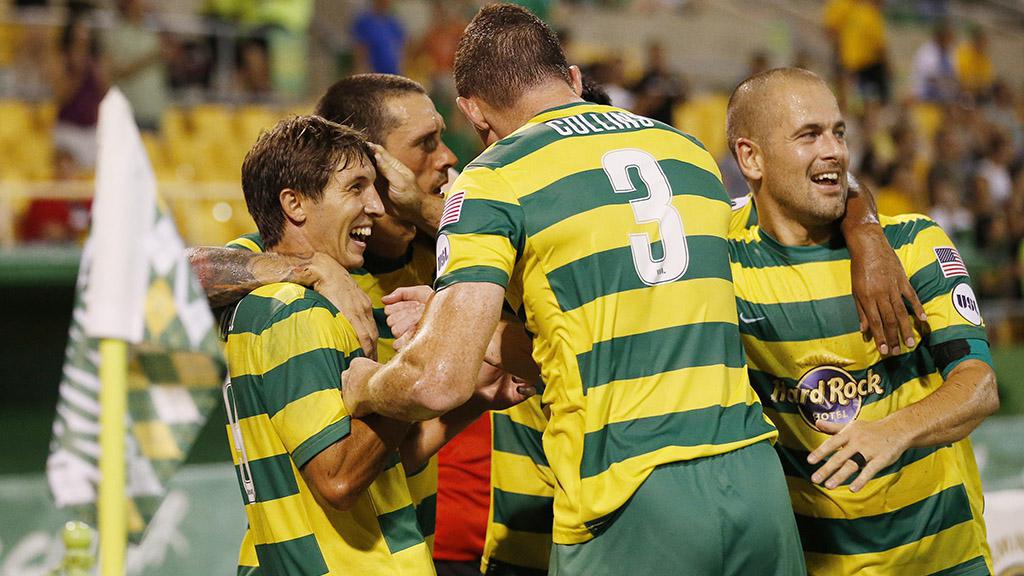 5. ON THE HOP: Reno 1868 FC went into Sunday’s game with the Swope Park Rangers needing to end two impressive streaks held by the defending USL Western Conference champions to take something from the contest. That the visitors at Children’s Mercy Victory Field did both in short order speaks to how strong 1868 FC has become, with Antoine Hoppenot leading an impressive attacking group to a 4-1 victory and fourth place in the Western Conference. Hoppenot’s goal just 60 seconds in caught the Rangers flat, and ended their 472-minute shutout streak. His play following that provided the structure that allowed the rest of the Reno attack to thrive, as 1868 FC pulled away late to record maybe their most impressive win of the season so far.

6. BACK TO BASICS: The cornerstone around which San Antonio FC’s outstanding season so far has been built has been its defensive work. After back-to-back contests that had seen late letdowns leave points on the table against both OKC Energy FC and Real Monarchs SLC, the defensive solidity the side has become known for returned at just the right time to allow SAFC to grab an important three points with a 1-0 victory away against Phoenix Rising FC. San Antonio is now seven points behind Real Monarchs SLC at the top of the Western Conference before the Monarchs’ game on Monday night against Tulsa Roughnecks FC, a fair gap to bridge, but as it returns home the confidence from winning a tough game against a tough opponent will provide a good morale boost.

7. PROMISE, NO REWARD: For its part, Phoenix Rising FC left Saturday’s game disappointed not to come away with at least a point, and probably justifiably so after the side played well for much of the game. A second defeat in a row leaves Rising FC with reduced margin for error when it comes to reaching the playoffs for the first time in club history, now three points back of eighth-place Orange County SC. Rising FC certainly has the ability to be part of the postseason, but the pressure to earn victories as the side heads on the road to face two teams in the LA Galaxy II and Rio Grande Valley FC that both side below it in the standings is higher than it might have been before this weekend’s results. 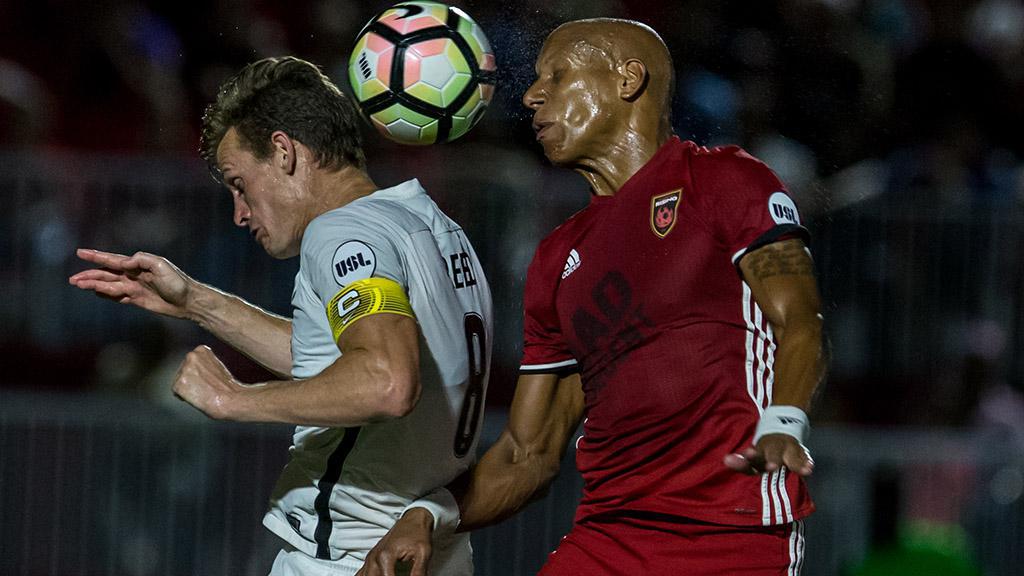 8. FEELING THE SQUEEZE: Saturday evening’s game between Orange County SC and Vancouver Whitecaps FC 2 maybe encapsulated the season for both clubs, as Orange County made an early goal stand up in a 1-0 win at Orange County Great Park despite WFC2 arguably being the more assertive side. After reaching the Western Conference Final of the USL Cup Playoffs a season ago, Vancouver hasn’t had the run of the green much this season. Orange County deserves some credit for a solid defensive display that saw the side register 20 tackles and look dangerous on the counterattack, and is now in good shape position-wise to reach the playoffs as it enters a run of six games over the next three weeks. OCSC’s performances over this run will need to be better than Saturday’s though, as it can’t rely on other opponents being as unfortunate.

9. FURY FEELING FINE: One side that didn’t need any good fortune over the weekend, and put itself squarely into position for a place in the postseason, was Ottawa Fury FC, which took a comprehensive 2-0 victory against Toronto FC II to move level on points with the eighth-place New York Red Bulls II with three games in hand. A first goal for the club by Azake Luboyera was supplemented by an excellent finish by Sito Seoane that brought the crowd of 6,763 at TD Place to its feet as the side’s four-game winless streak felt like a distant memory. “It was the best offensive performance that I’ve witnessed since I’ve been here,” said Fury FC Head Coach Paul Dalglish, whose team will be one to watch as it hosts Bethlehem Steel FC and the Charlotte Independence in the next two weekends.

10. HIT THE SUSTAIN: Saint Louis FC isn’t in quite as strong a position as Ottawa Fury FC, but with a 1-0 win against the Richmond Kickers on Saturday thanks to newcomer Emmanuel Appiah’s goal on debut for the club, things are a little bit brighter when it comes to the club’s playoff prospects. With all of the expectations brought by Preki’s arrival as Head Coach, and the influx of successful players from elsewhere, there has been understandable frustration at the team’s lack of form since the opening four games of the season. Two wins in the last three games have provided a small turnaround, and put the side only two points back of the eighth-place Red Bulls II with 14 games to go, but the upcoming slate that sees STLFC host the Swope Park Rangers this Saturday, and also face games with Tulsa Roughnecks FC and the Tampa Bay Rowdies before the middle of August is going to tell us a lot about how this season ends for the club.

11. REAL REVENGE: Real Monarchs SLC kick off Week 20 on Monday night with a chance to earn some revenge on one of only two teams to hand the Western Conference leader a defeat this season. Tulsa Roughnecks FC arrived at Rio Tinto Stadium in good form, too, having taken 10 points from their last four games, tying the club’s best run since joining the league in 2015. With the pack starting to loosen around the red line in the Western Conference playoff race, the Roughnecks could do themselves a big favor with a win. Against a Monarchs side that has won 10 in a row at home dating back to last season, that will be a tall order, but one that should be worth tuning in for.