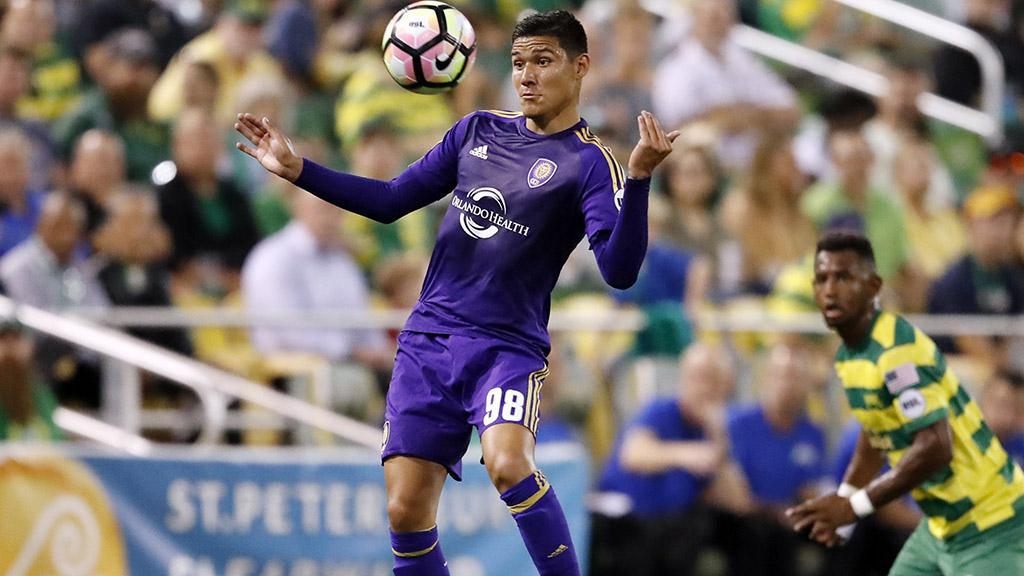 ORLANDO, Fla. – When you watch Orlando City B’s Pierre Da Silva play, at the top of the list of things that jump out is the manner in which he moves with the ball.

“He’s got such good balance, he rides tackles really well,” said Orlando City B Head Coach Anthony Pulis recently. “He’s grown into that wide player that we like to come in off the line and pick up good positions in the hard spaces, and he’s getting that understanding now of doing that.”

In his second professional season, the U.S. U19 international has taken a clear step up, earning him the No. 1 position in the 2017 USL 20 Under 20. After being honored in last season’s poll, Da Silva was delighted to have achieved the recognition from coaches around the league.

“It’s a great feeling,” he said. “It means a lot to me. It means that all the hard work I’ve put in on the field, it’s paying off.”

Da Silva’s progression through Orlando’s organization began when he first came into training with the club’s Academy. Current San Antonio FC Head Coach Darren Powell was the club’s Academy Director at the time, and was quickly taken with what Da Silva showed on the field.

“I think we trained him up an age-group and he was able to compete, just showing all those characteristics,” said Powell. “He glides with a soccer ball, just so comfortable. Then you dig deeper and see what other characteristics he has as a player, and he has that ability to come inside, go outside, good movement, it’s what makes him a good player.”

Da Silva was the first Orlando Academy player to sign with OCB for its inaugural season, and quickly established himself as a player to watch. His first season saw Da Silva record four assists in addition to a pair of goals in 23 appearances as the side reached the USL Cup Playoffs at the first try. He then signed an MLS Homegrown contract this past offseason, joining the likes of U.S. U20 international Tommy Redding with the Lions.

While Redding made his professional debut three years ago in the USL when Orlando was still a member of the league, Da Silva believes the addition of OCB to the organization has given players like himself and other Academy products a big opportunity to grow.

“Our Academy players, they’re more involved with the first team, especially now that we have OCB,” said Da Silva. “When Tommy Redding was playing in the USL, there was only one team. Now we have two teams, I feel like the Academy players are getting more training time with the first team and the USL team, which makes them a better player, playing against pros every single day.”

What has helped Da Silva set himself apart from the pack, though, is the intuitiveness he brings to the game. Add in the desire to dig deeper into the player he could become, and you have a combination that is likely to bring success at the top level sooner rather than later.

“I think his mentality is fantastic,” said Pulis. “He came in last year as a 17-year-old rookie and the way he adapted to being a full-time professional was like a duck to water. I wasn’t expecting him to do as well as what he did. He came in, his training habits are fantastic. He’s such a coachable kid, and the fact that whatever you ask him to do, he’ll try to do it to the best of his ability. He’ll ask good questions, he wants to learn, and he wants to get better.”

That mentality has also paid off for OCB in some of its bigger games this season. For both Da Silva and Pulis, his performance in a 2-0 victory against FC Cincinnati on May 13 in front of a crowd of 19,130 at Nippert Stadium showed his ability to rise to a big occasion.

“We got awarded a penalty kick, I want to say it was probably quite late in the game, about the 75th minute,” said Pulis. “It was the first penalty kick we’d had this year, and I hadn’t really assigned a penalty taker, so I was kind of intrigued as to who wanted to step up, who wanted to go and grab the ball, and as soon as he got fouled, he went and grabbed the ball, and stroked it home in front of 20,000 people in Cincinnati. That shows you the type of mentality he’s got, the type of confidence and that willingness to stand up and be counted when you need him most.”

“For me, as a player, I like playing in front of big crowds,” said Da Silva. “It’s a different atmosphere. Especially against Cincinnati, when I took the PK, I like that feeling when the crowd just shuts down.”

Da Silva – who turned 19 years old today – could be playing in front of similar crowds at Orlando City Stadium soon enough. With six assists already this season – two off the league-lead with 14 games to go in the regular season – Da Silva has the chance to push into the spotlight as the race for the playoffs picks up.

“He’s not arrogant, but he’s got that little bit of swagger about him that he knows he can cause problems,” said Pulis. “When he gets into the final third and he’s facing defenders up, he can beat people off the dribble, he can play penetrating passes, his delivery when he gets into crossing positions is fantastic, and long may it continue.”

And while there’s still a long way to go for Da Silva to make himself a regular for the Lions in MLS, all the ingredients are there for it to happen.

“The Orlando City fans, the crowd that we have here for the MLS team is the best in MLS,” said Da Silva. “I will be really proud to play in front of them.”