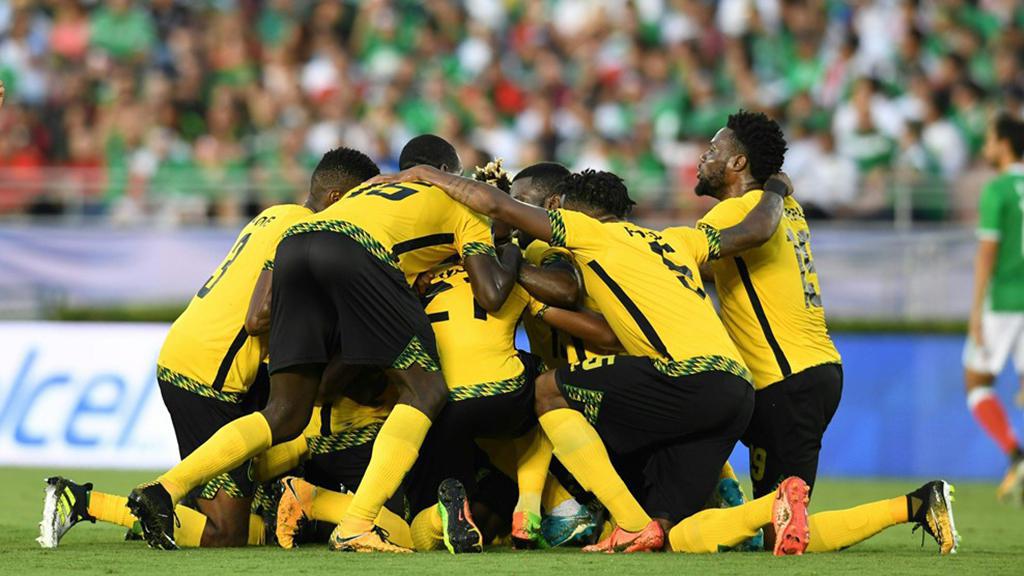 With three-fifths of the regular season complete, two distinct areas of the USL standings are starting to tighten. After another interesting weekend of action, the top of the Eastern Conference is looking as interesting as it has all year, while the space above and below the red cutoff line for the playoffs in the Western Conference is starting to get crowded. We start this week, though, with a major competition away from the league.

1. GOING FOR GOLD: Jamaica’s 1-0 victory against Mexico on Sunday night in the semifinals of the 2017 CONCACAF Gold Cup will be chopped up seven ways from Sunday ahead of Wednesday night’s final, where the Reggae Boyz square off with the United States. What’s undeniable, however, is the influence some USL standouts have had on Jamaica’s success in reaching its second consecutive Gold Cup Final. From Tampa Bay Rowdies center back Damion Lowe – who has played every minute of the tournament so far – to Charleston Battery forward Romario Williams – whose two goals put him tied for the team lead – and the contributions of current Bethlehem Steel FC forward Cory Burke and former USL players like Michael Binns, the high level produced by the side under the guidance of Head Coach Theodore Whitmore is a testament to the rising talent level in the USL as a whole.

2. BLOWN FUSE: While Lowe and Williams were preparing to do their country proud on Sunday their clubs squared off at Al Lang Stadium for what might be one of the pivotal games in the USL regular season on Saturday night. The Tampa Bay Rowdies rejuvenated its chances at a high finish in the race for playoff position with a 2-0 victory against the Charleston Battery in front of 5,619 fans. The victory provided a modicum of revenge for the Rowdies, who had fallen in each of the previous two meetings with the Battery during the regular season, but the main story coming out of the game was the form of Martin Paterson. The former Northern Ireland international has now scored three goals in three games and is looking like the consistent finishing presence the side was lacking during a seven-game winless streak.

3. THUNDER STRUCK: The Rowdies have been there or thereabouts near the top of the Eastern Conference standings for most of the season, which was also the expectation going into 2017 for FC Cincinnati. After Saturday night’s lightning-hit 3-0 victory against the Harrisburg City Islanders, Cincinnati now appears to be rounding into the sort of form we were expecting to see earlier this year, and at just the right time to make a serious run toward the top of the standings. Saturday’s win at Nippert Stadium in front of 18,334 had some flaws. The host was arguably second-best to the surging City Islanders before the lightning struck for the first time in the 27th minute, but once FCC got into its rhythm, the high level the side possesses was in full evidence and should be a concern for teams sitting above it in the standings. 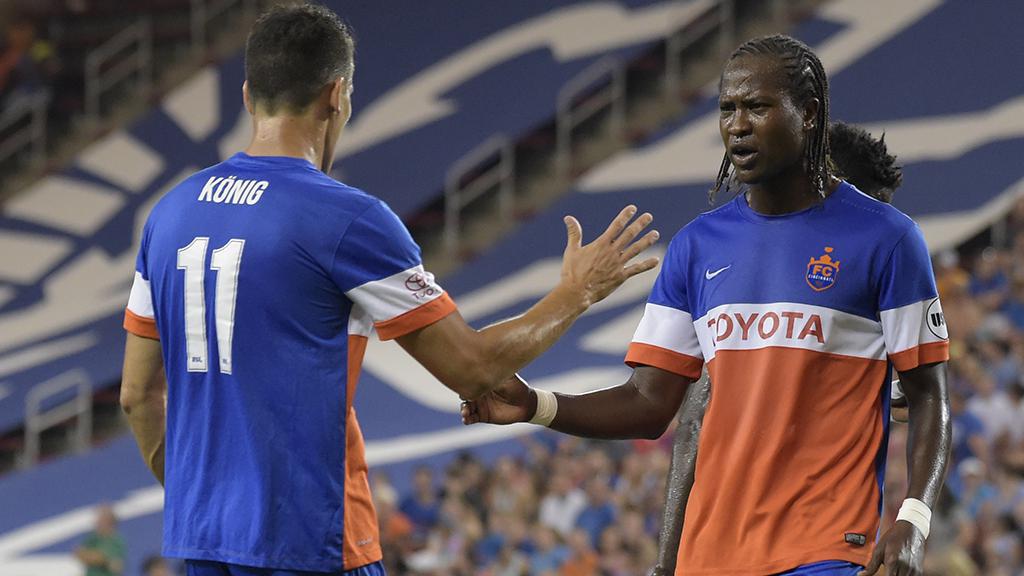 4. KINGS OF THE HILL: One of the teams that benefited most from Tampa Bay’s victory against the Battery was Louisville City FC, which put in a scintillating second-half performance to not only claim the Kings’ Cup against Saint Louis FC for a third consecutive season, but also move within three points of the top with two games in hand on Charleston going into Week 19. Louisville had to rally against Saint Louis, which got another nice boost from recent addition Daniel Jackson with his goal in first-half stoppage time, but after the host was reduced to 10 men early in the second half, Louisville was clinical in taking the lead, and then ruthless in pulling away late for another deflating night for STLFC’s fans.

5. FINDING A WAY: While the picture at the top of the Eastern Conference became a lot more interesting after this weekend’s action, in the Western Conference, it was steady as you go for Real Monarchs SLC after Max Lachowecki’s late goal earned a 2-2 draw with San Antonio FC to keep a decent gap between the Monarchs and the rest of the conference. Real was forced out of its comfort zone by San Antonio at Toyota Field, and Head Coach Mark Briggs had to reach into his bench early after Andrew Brody received a knock that saw Chase Minter join the fray. In the end, Minter’s presence paid off as his cross found Lachowecki for a header to the right corner of the net for the Monarchs’ second goal of the night and a valuable road point.

6. SLIPPING BACK: San Antonio FC has been sitting in the top two in the Western Conference for most of the season, but another late setback saw the side cede its place to the surging Swope Park Rangers after a third consecutive draw in front of 7,642 at Toyota Field. There were shades of SAFC’s previous outing in the result with the Monarchs, too, as the hosts looked to have done enough to pick up all three points, only to have victory grabbed away late. San Antonio has still lost only once this season, but Saturday’s visit to Phoenix could end up being a test of where this side is mentally as the season starts around the final turn. 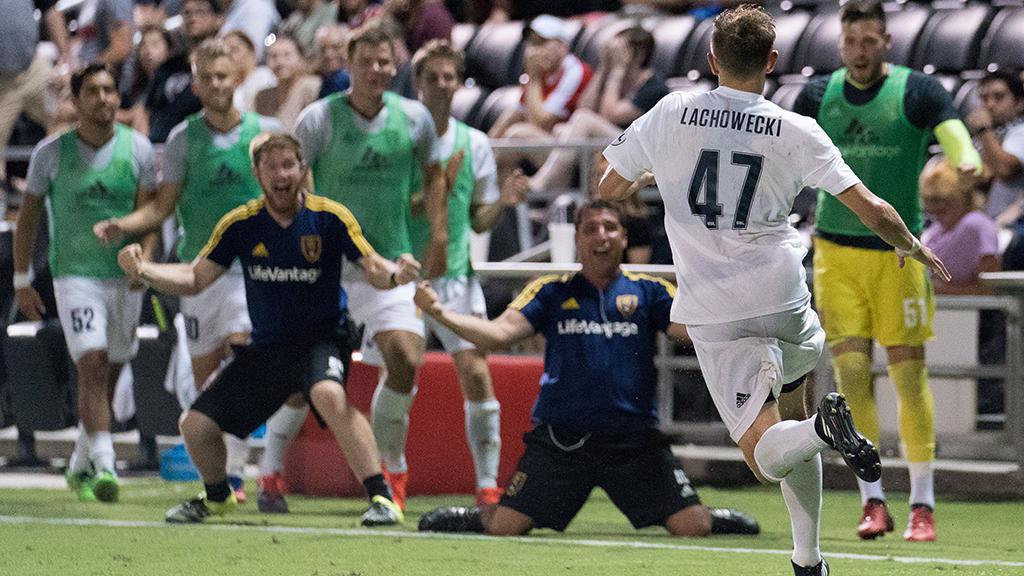 7. FLAMING OUT: Phoenix Rising FC will have numerous reasons to want to add to San Antonio’s recent downturn after it suffered the first loss of Head Coach Patrice Carteron’s tenure at the club on Saturday night against Tulsa Roughnecks FC at ONEOK Field. One of the bigger games of the weekend was turned into an example of how the Roughnecks have turned around their fortunes this season in front of a season-high attendance of 5,647 fans, as the host controlled most possession and put away chances well to move firmly into the playoff positions. Good with the ball, and far more resilient without it, the Roughnecks four-game undefeated streak should be turning heads among the city’s fans and around the Western Conference.

8. RIGHT AT HOME: Another team that’s put in a solid recent run of form is Orange County SC, which continued to assert its playoff credentials on Saturday evening at Orange County Great Park with a 4-0 victory against Rio Grande Valley FC. OCSC took control of the game with a good early goal, and then a key second goal that provided a positive boost just as the Toros were starting to make a game of it. Orange County has now scored the opening goal in four consecutive games, going 2-0-2 in that span, which is making opponents work to earn anything they get from Head Coach Logan Pause’s side. With still plenty of games to make up, the odds of OCSC sitting in the top eight sooner rather than later appear to increase with every outing.

9. BETTER LATE THAN NEVER: OKC Energy FC doesn’t have nearly the margin of error that Orange County does when it comes to playoff chances, but thanks to a pair of goals apiece from Miguel Gonzalez and Jose Angulo on Saturday night, the side opened the door a little wider in its 4-3 victory against Colorado Springs Switchbacks FC. Gonzalez’s recent breakout of three goals in two games has to be incredibly pleasing for Head Coach Jimmy Nielsen, with the club’s major offseason move having not paid much in return prior to his late tally against San Antonio FC last weekend. If Gonzalez gets going and the defense can tighten up some, hopes for a postseason berth will quickly rise. 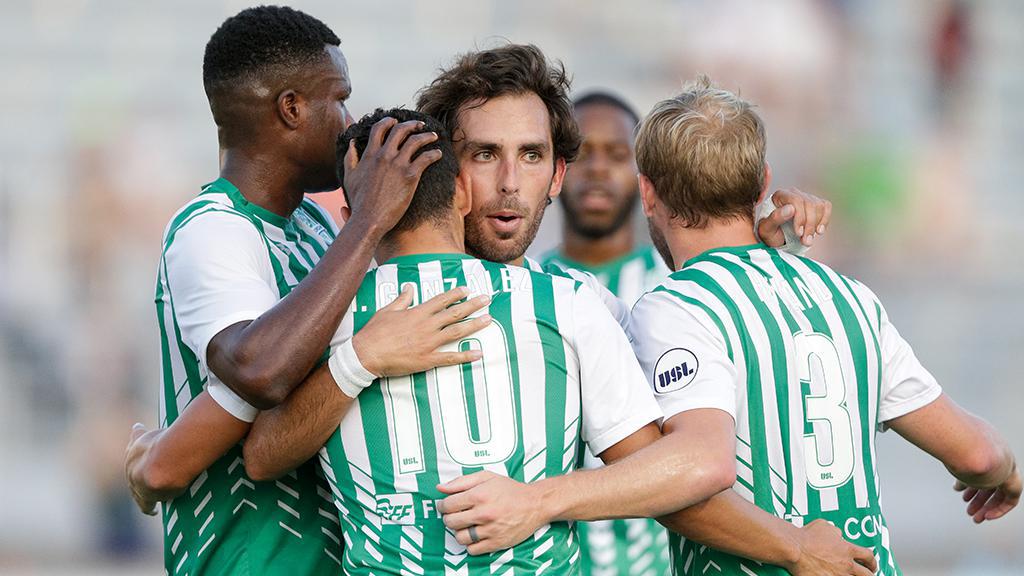 10. PICTURE PERFECT: Everything that came to pass this weekend in the Western Conference has put into place another big race to the finish that looks as tight as we’ve come to expect over the past couple of seasons. There are now seven teams from sixth place to 12th in the Western Conference that sit just four points apart, and while the anomaly of Orange County’s games in hand can be factored in, there’s still plenty of reason to believe it will be in that mix come the final 10 games of its season. Does that mean we’ll end up having a final Saturday as dramatic as last year? Not necessarily, but it certainly is shaping up to provide plenty of angst for fans, and plenty of entertainment for neutrals.

11. THE RED DEVIL: As we began today’s edition outside the league’s confines, we’ll end there too as well, because while the USL regular season is in full swing, another great story from the league’s past opened a new chapter on Saturday night at Estadio Chivas in Guadalajara, Mexico. Three seasons ago, Rodrigo Lopez was in the process of leading Sacramento Republic FC to the USL Cup in the club’s inaugural season. On Saturday, he was making his debut for Toluca in Liga MX as the side earned a 0-0 draw against 2017 Clausura champion Chivas de Guadalajara on their home turf. Lopez’s place in the USL’s history was cemented when he was named MVP of the 2014 USL Cup Final, but what he’s gone on to achieve since then is a story that maybe should be getting wider attention.