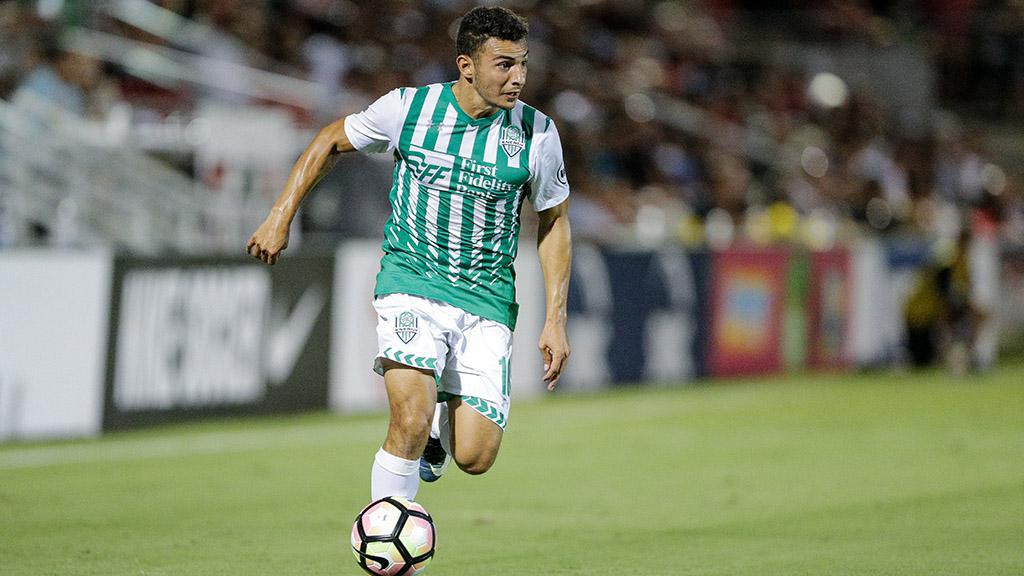 SAN ANTONIO – As OKC Energy FC defender Coady Andrews’ penalty kick rang off the crossbar with five minutes to go, it easily could have been chalked off as another night of missed opportunities for Energy FC in a season that has provided its fair share of frustrations.

Thanks to Miguel Gonzalez’s goal in the fourth minute of stoppage time, however, the visitors were able to grab a point against San Antonio FC at Toyota Field in the USL Game of the Week on ESPNU on Friday night in front of a sellout crowd of 8,131 that was preparing to celebrate another home win this season.

“What we brought today was a big heart,” said Energy FC Head Coach Jimmy Nielsen. “We kept battling, and battling, and battling to the end and the guys deserve a lot of credit. It’s a tough environment down here in San Antonio, they’re having good momentum. We battled through to the last second, and we got exactly what we deserved in the end.”

After a dour first half that saw few chances at either end, Energy FC tried to shift the tempo to start the second half as they began to push more players upfield and tried to press the hosts more in their half. The idea misfired early, as a counterattack that set up a two-on-two break that was then joined by SAFC winger Billy Forbes resulted in the opening goal of the game, but Energy FC persisted and ended up outshooting SAFC 7-4 in the second half.

“We knew what we needed to do in the second half,” said Gonzalez. “We brought the intensity that we’ve been looking for in the last couple of games, but haven’t had. We brought it here, we fought for each other, and as you could see in the second half we have the majority of the chances, pressing them high.”

The chance to tie the game came with nine minutes to go, when a shot by Anthony Wallace was handled by former Energy FC defender Cyprian Hedrick. A penalty kick wasn’t immediately given, but referee Caleb Mendez elected to review the play using the Video Assistant Referee system, and after a short review pointed to the spot.

Hope turned to disappointment as Andrews’ shot rang off the underside of the crossbar and out with San Antonio FC goalkeeper Diego Restrepo going the wrong way, and San Antonio was able to clear away to safety. With what might have been its last chance of the game, however, San Antonio wasn’t able to find a clearance, allowing Gonzalez to hook home a volley after an attempt to knock the ball out after a big save by Restrepo came back off the crossbar.

“[Alex] Dixon sent a good ball in, [Luis] Martinez got a header to it, the ‘keeper made a save,” said Gonzalez. “I think it went off the post and I just saw it bounce and I went for the shot and luckily it hit the back of the net.”

While the draw saw Energy FC’s winless streak stretch to five games, and keeps them three points out of the top eight in the Western Conference, Nielsen was hopeful the late surge would carry the team forward.

“That’s exactly what we needed in the situation we’re in right now,” said Nielsen. “Hopefully this little boost of momentum we have right now can carry onto the coming games.”

With a crucial home game against rival Colorado Springs Switchbacks FC come next at Taft Stadium on Saturday night, OKC knows it isn’t out of the woods yet, but it could be on the right path.

“I think it says a lot about the heart of this team,” said Energy FC defender Sam Fink. “Never say die, never give up. Obviously, we’d like to be top of the table right now and the fact is we’re not, and I think that the positive is we continue to fight for one another. I think the soccer will break out, it’ll come, but one thing you can’t really work on is heart, and we showed a lot of heart tonight to get that result.”