San Antonio falls for the first time, while Harrisburg scores a stunner 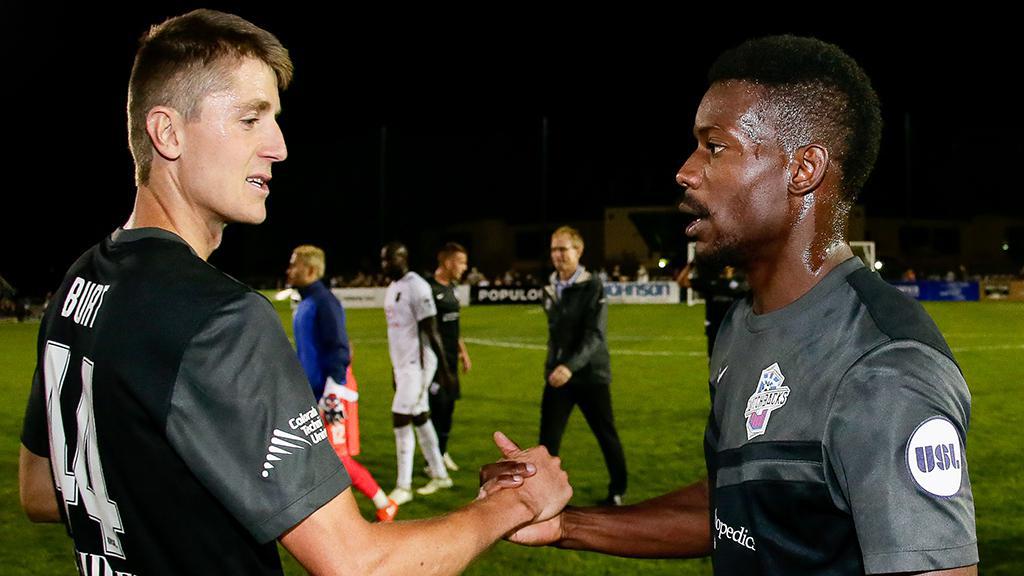 The two most significant streaks of the season so far came to an end on Saturday night, highlighting a weekend that featured one of the season’s biggest surprises, and some last-gasp heroics that leave the defending USL Cup champions in a precarious position. Week 14 of the 2017 USL regular season had a little bit of everything as the season approaches the halfway mark.

1. ROCKY MOUNTAIN HIGH: San Antonio FC appeared to have gotten itself back on track last Saturday night as its attack sprang back into life in a resounding victory, but its visit to face Colorado Springs Switchbacks FC was never going to be a simple task as the side looked to extend its 14-game undefeated streak. That proved the case as the Switchbacks claimed the season series over SAFC with a 1-0 victory in front of a packed house at Weidner Field that set a club attendance record, with Sean McFarlane’s goal making the difference in first-half stoppage time. Colorado Springs has shown signs of being on the right track recently, and this win and the top-four berth that came with it in the Western Conference as we kick off Week 15 should provide a major confidence boost.

2. THE ROAD AHEAD: Maybe the most significant moment of San Antonio’s trip to Colorado Springs didn’t arrive with the final whistle that saw its undefeated run – the fourth-longest to start a season in league history – come to an end, but 13 minutes prior when Diego Restrepo was sent off as he brought down the Switchbacks’ Kevaughn Frater just outside the penalty area. With Matt Cardone still listed on the injured list for SAFC, and Restrepo now looking at a suspension, third-string goalkeeper Lee Johnston’s first start in the USL is looking set for Saturday’s game at Sacramento Republic FC. That’s quite a test for someone whose first USL minutes were as a substitute this past weekend.

3. RAISE THE REPUBLIC: While Sacramento Republic FC’s fans are sure to make San Antonio’s players hear it on Saturday night, last season’s first-place finisher in the Western Conference is also looking like it will provide San Antonio’s back line a very tough test after recording nine goals in the past week. Sacramento was made to work harder than it would have liked by the LA Galaxy II on Sunday night after putting up three goals in the opening 20 minutes as it had to regain a hold of the game after Los Dos drew within a goal in the visitor’s 3-2 victory with 20 minutes to go. Now the side can look forward to facing the LA Galaxy on Wednesday night in the Lamar Hunt U.S. Open Cup at a venue – the StubHub Center Track & Field Stadium – that Republic FC has never suffered defeat at in its history.

4. HITTING STRIDE: The other USL club in action in the Open Cup’s Round of 16 on Wednesday night, FC Cincinnati, had far fewer issues than Sacramento in a 2-0 victory against Saint Louis FC in front of 20,125 fans at Nippert Stadium. What could have been a trap game – with not only FCC’s game against the Chicago Fire looming, but Saint Louis potentially looking for revenge for their 4-0 defeat earlier this season – instead provided Cincinnati with positive momentum after a good showing in all facets of the game. “This is the best this team has played since I’ve been there,” said midfielder Kenney Walker after the win, having put in a stellar performance himself. The Chicago Fire will still be a massive challenge to overcome, but FCC is at least moving in the right direction going in. 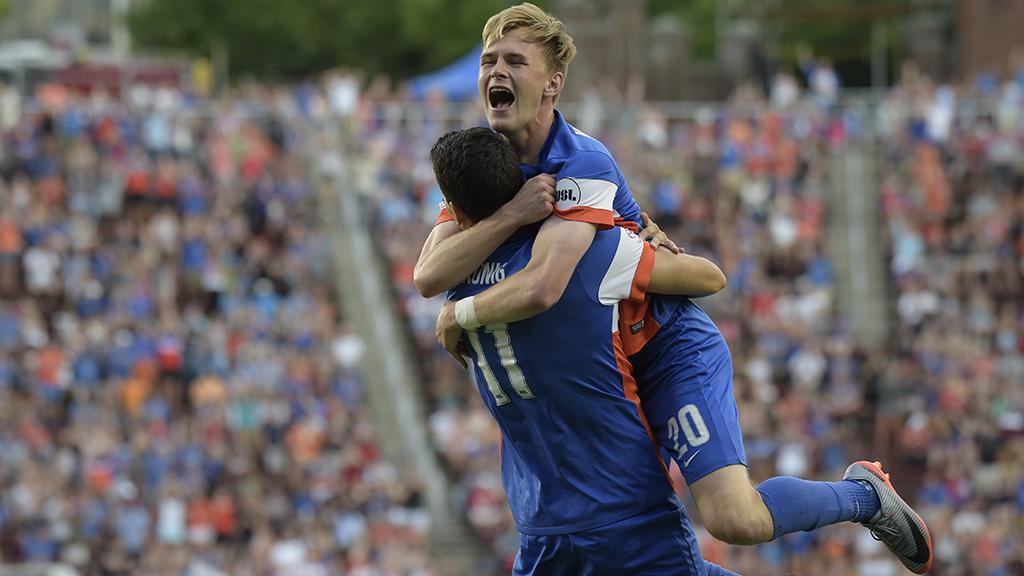 5. BOLT FROM THE BLUE: With the way Louisville City FC had played over the past month, there probably weren’t many people outside the Harrisburg City Islanders’ locker room and hardcore support who were expecting City to not emerge with a result from Saturday’s game at FNB Field. Instead, a sprightly display by the hosts and a first goal of the season for Pedro Ribeiro saw the City Islanders move off the bottom of the Eastern Conference, and potentially give the club the shot in the arm its season needs. The question now is whether this was just a remarkable one-off, or whether the City Islanders can put together a run of the kind it managed in 2014. Back then, the side that included Ribeiro sat with a 3-7-4 record at the halfway point of the season before reaching the USL Cup Final. The climb is a steep one, but nothing’s settled yet.

6. CHARGING AHEAD: While Louisville was suffering only its second loss of the season, the Charleston Battery were making sure no such mishap would happen to them against Toronto FC II at MUSC Health Stadium. With Romario Williams and Dante Marini both scoring twice, the Battery extended their lead at the top of the Eastern Conference, and are now looking in extremely good shape for two big home games in the next two weeks against the Tampa Bay Rowdies and Louisville. The question for Charleston will be the availability of Williams, who now leads the USL in goals with 13, and whether the side could continue its impressive scoring rate should he be called into Jamaica’s CONCACAF Gold Cup squad. With the experience the side has, though, the Battery should still be able to find ways to get results even if Williams departs for a spell.

7. EARNED RESPECT: The other big streak that ended going into the weekend was that of the Western Conference leader Real Monarchs SLC. While the Monarchs saw their USL record nine-game winning streak come to an end in a 1-1 draw on the road against Phoenix Rising FC in front of 6,365 fans, they continued to earn plenty of respect for their performance. It’s arguable the Monarchs could have taken all three points from their trip if their finishing had been that little bit sharper, but with the side controlling majority possession and notching almost 200 passes more than their hosts, Real made Rising FC work hard for the point that came through Omar Bravo’s first league goal of the season. 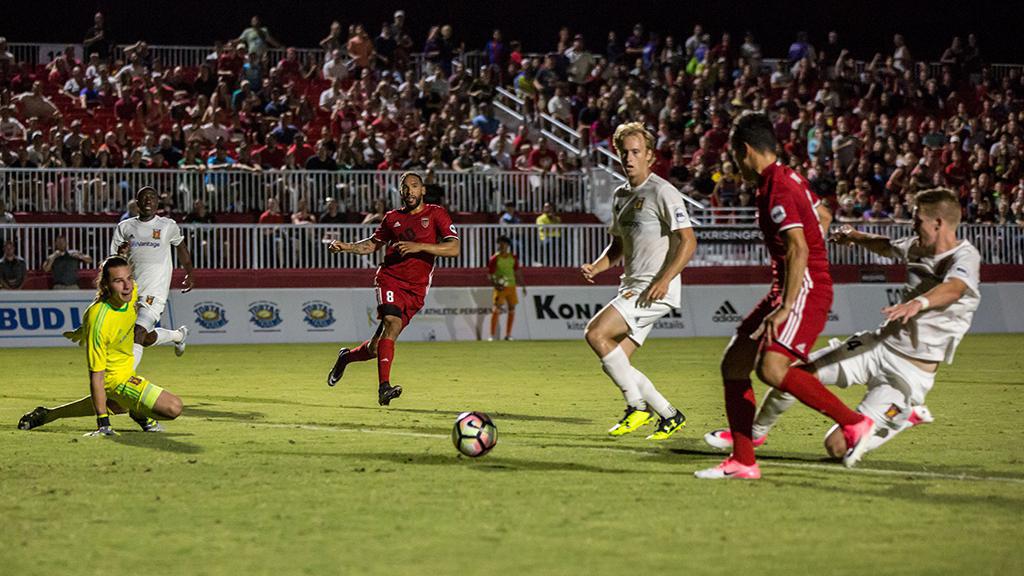 8. ORANGE AID: The great thing about having games in hand is the mood of optimism it can bring. The worst thing about having games in hand is having to capitalize on them when the chips are down. Orange County SC felt both edges of that sword on Saturday night in a helter-skelter 4-3 victory against Seattle Sounders FC 2 that at the end of the season could prove an important win for OCSC. With a three-goal lead at halftime, the game appeared well in hand, but with S2 also well in contention for a playoff berth the visitors’ comeback attempted at Orange County Great Park almost paid off. The three points put OCSC well in range of the top eight, though, even if the team’s defensive displays continue to be a concern.

9. INDEPENDENT STREAK: Another team looking to take advantage of its games in hand is the Charlotte Independence, and after a second consecutive 2-0 victory – this time against the Richmond Kickers at City Stadium – the club’s ship seems to be set on the right course again. Enzo Martinez’s return to the lineup gave Charlotte a nice boost as the Kickers were again unable to find the score sheet, and helped the Independence move into the eighth and final playoff berth. As mentioned above, there’s always a caveat when it comes to making up ground in the schedule, but with the congestion in the middle of the Eastern standings, the Independence can see a path to the top four from their current spot.

10. HEATING UP: The congestion in the middle of the Eastern Conference became even tighter on Friday night as a magical moment from Pierre Da Silva brought Orlando City B a crucial victory. The talented playmaker’s move to set up Fernando Timbo’s goal against the Rochester Rhinos, which saw the hosts fall for the first time at Capelli Sport Stadium this season, was another example of why Da Silva has been so highly regarded in Orlando’s organization, and as importantly got OCB back into the mix for the playoff positions. With Pittsburgh’s victory the previous night against Tampa Bay, there are now six teams on either 20 or 19 points in the East, setting up some tense contests in the next few weeks.

11. FOLLOWING THROUGH: After seeing its seven-game undefeated streak come to an end last Monday night, Reno 1868 FC didn’t appear to dwell on the disappointment long as it rebounded strongly with a 2-0 victory against the Portland Timbers 2 on Saturday to regain a solid foothold in the Western Conference playoff race. The victory was likely a sweet one for Seth Casiple, who scored against his former team for his second goal of the season, and former Timbers Homegrown signing Brent Richards, whose history with the club went all the way back to being the PDL Most Valuable Player in 2010. With a big game against Phoenix up next this Friday night, Greater Nevada Field should be rocking for one of the higher-profile games of Week 15.