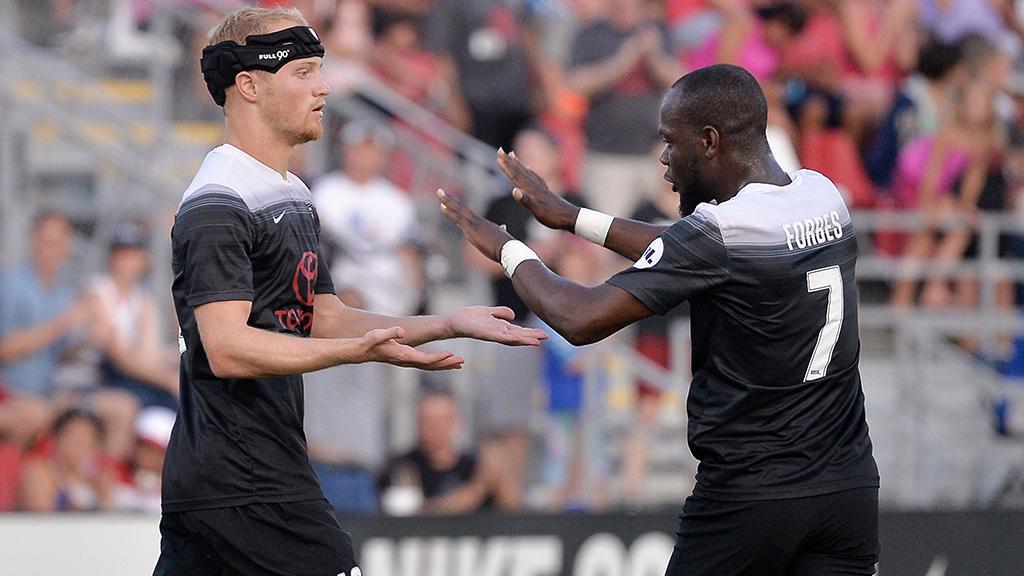 If the opening 10 weeks of the USL regular season set the stage, the middle third – as games begin to arrive quickly one after the other – can be where the key victories are won to earn a place high up the conference standings. With 11 games over the past three days to wrap up Week 13, and another 19 over the next seven as we hurtle straight into Week 14, two teams in particular did themselves major favors near the top of their respective standings on Saturday night.

1. SPURRED ON: San Antonio’s recent scoring slump had put even more pressure on a stellar defensive unit to maintain the club’s undefeated start to the season. On Saturday night, the club’s shutout streak may have come to an end, but the life shown by the SAFC attack will have made that statistic a footnote to a 3-1 victory against Tulsa Roughnecks FC in front of 7,376 fans at Toyota Field. Kris Tyrpak’s pair of goals, including maybe the most creative finish of the weekend to open the scoring, led the way to a much-needed victory as the club’s defense finally relented short of Rio Grande Valley’s monumental record. Back atop the Western Conference – if only for a couple of days – will have everyone within the club breathing a little easier.

2. STRIKE LIKE A BEE: Louisville City FC paid tribute to the city’s most famous son at Saturday night’s game as part of the I Am Ali Festival currently running through July 15 at the Muhammed Ali Center, with scarves that included a play on Ali’s famous phrase: Pass like a Butterfly, Strike like a Bee. Louisville’s attack hasn’t needed much inspiration of late, and in a 3-0 victory against the Pittsburgh Riverhounds it provided some of the thrill of a classic heavyweight bout. Cameron Lancaster’s first goals since April 15 saw the English forward get in on the recent glut of goals that have come Louisville’s way in the past four games, and with 8,741 fans on hand at Slugger Field to see a second successive three-goal victory, the City juggernaut looks as unstoppable as Ali in his prime.

3. TALL TIMBER: The one game everyone should now have circled on their calendars is Louisville’s visit to MUSC Health Stadium on July 8 to take on the Charleston Battery, which very likely will pit the top two sides in the Eastern Conference against one another in a rematch from last season’s USL Cup Playoffs. The Battery remained undefeated all-time against FC Cincinnati on Saturday as they emerged with a 2-2 draw in front of 21,074 fans at Nippert Stadium, with Forrest Lasso coming to the fore again. The 6-foot-5 center back played a limited role in his first two seasons in Charleston, but with Shawn Ferguson electing to step away from the game this offseason, Lasso has more than filled in alongside Taylor Mueller. Once a late-game option to either defend a lead, or find an equalizer, Lasso’s ability to find the net from set pieces is also paying off handsomely. His fifth goal of the season almost gave the Battery another win before Andrew Wiedeman’s outstanding late strike leveled things for FCC, but a point on the road will certainly work for Head Coach Mike Anhaeuser’s men.

4. ALL TIED UP: Cincinnati, for its part, said after the game that Wiedeman’s equalizer with 10 minutes to go made the draw with the Battery feel like a win. A couple of days later, though, it’s possible the reality that the side’s fourth draw on home turf in the league this season is putting pressure on FCC in the standings. Cincinnati has reached the midway point of its home schedule at just 3-1-4, and as a result is currently seventh in the Eastern Conference standings, within reach of the likes of Ottawa Fury FC and Saint Louis FC, both of whom sit below eighth place, but have games in hand to make up. With Saint Louis visiting Nippert Stadium this Saturday night, the pressure is going to be firmly on FCC to produce. 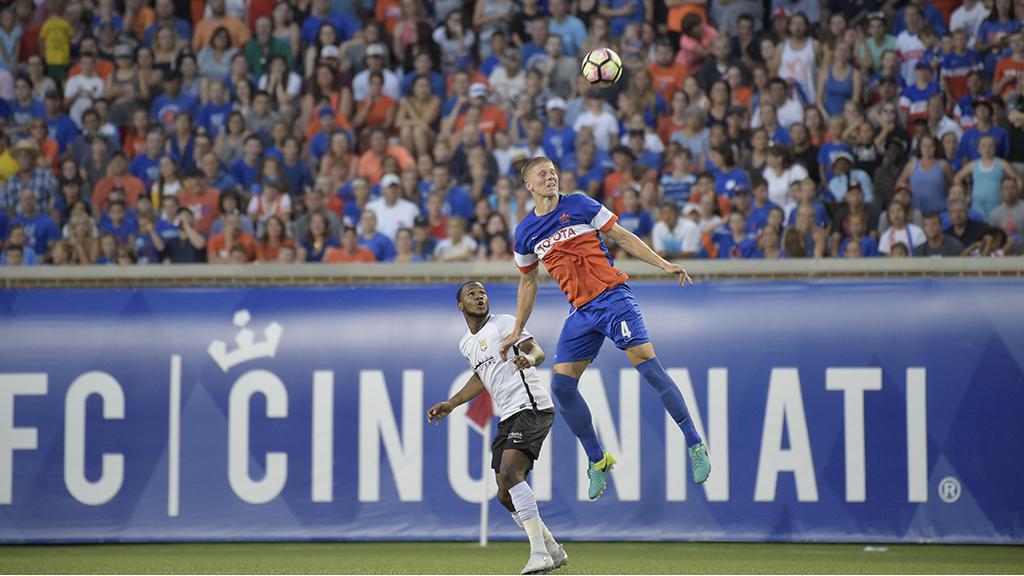 5. MOVING ON UP: In their travels around the region to open their home slate this season, things hadn’t been entirely ideal for the Charlotte Independence. Saturday night’s start of a new era at the Sportsplex at Matthews boded well for the future, however, as a sellout crowd saw the Independence take a solid 2-0 victory against the Harrisburg City Islanders behind a goal and assist by Jorge Herrera. That it was the veteran Colombian that scored the first goal in the venue’s history was certainly appropriate; it’s hard to think of anyone who has meant more to soccer in Charlotte than Herrera in recent history. With games to make up on the group ahead, getting established on the right foot in the club’s new home was an ideal start.

6. RAISE THE REPUBLIC: Coming off the euphoria of last Wednesday night’s victory against Real Salt Lake in the Lamar Hunt U.S. Open Cup, Sacramento Republic FC got a cold splash of reality early as some slack defending saw Vancouver Whitecaps FC 2 take the lead within the first five minutes in front of 11,569 fans at Papa Murphy’s Park. Republic FC needed a response, and got one first from a likely source, and then maybe one of the most unlikely to take what was a crucial 2-1 win in the race for the postseason. Sammy Ochoa’s equalizer soon after WFC2’s Terran Campbell had opened the score helped settle the side, but as the tension began to rise that a winner wouldn’t be forthcoming, defensive midfielder Agustin Cazarez came through with his second goal in a week after tallying against RSL. As tightly packed as the Western Conference remains, though, Sacramento isn’t out of the woods yet. The side will reach the midway point of its season this Sunday against the LA Galaxy II, leaving little margin for error the rest of the way.

7. TORO TURNS: Sacramento’s visitor on Wednesday night, Rio Grande Valley FC, is in a similar predicament to Republic FC after Saturday night’s 1-0 defeat to the LA Galaxy II in front of 8,656 fans at H-E-B Park. The inconsistency the side has shown this season has given the Toros a place in the top eight as of now, but the team is still precariously placed given the tightness above and below the red line. The good news for the Toros is they don’t face the same type of pressure in terms of games played that Republic FC does as of now, but with only one win in their past five games the team has got to start putting home wins on the board with more frequency than it is right now. 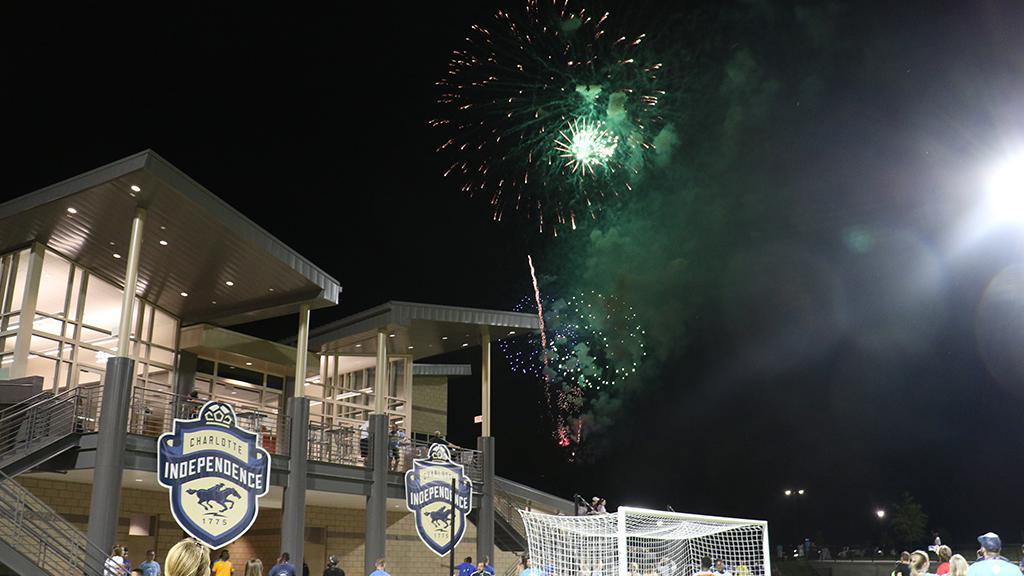 8. SILENT STAMPEDE: One team the Toros could look to emulate are the Rochester Rhinos, who continued their move up the Eastern Conference with a third consecutive 1-0 victory at Capelli Sport Stadium on Saturday evening, Ottawa Fury FC the latest playoff contender to fall prey to Bob Lilley’s side. Ryan Felix’s goal ensured another home win for the now fourth-place Rhinos, who are now undefeated in their last eight games, having previously downed the Tampa Bay Rowdies and FC Cincinnati by the same score in their most recent home outings. The Rhinos have had to retool this season, but with Lilley confident enough in his depth to rotate consistently and still find results, the success he’s brought the team since the start of the 2015 season has this team looking in a familiar place.

9. AT THE DOUBLE: After all the pomp and circumstance of his debut had subsided, the second game in Didier Drogba’s Phoenix Rising FC career didn’t see the former Premier League champion jump off the screen as he had against Vancouver Whitecaps FC 2, but his pair of goals earned another valuable point on the road against a Swope Park Rangers side that will consider Sunday’s 2-2 draw at Children’s Mercy Victory Field a missed opportunity. The Rangers twice took the lead and were in control on both occasions before a pair of uncharacteristic errors opened the door for Drogba. As you might expect, the former Ivory Coast international didn’t need a second invitation, and a pinpoint finish from 20 yards and a late penalty kick were both taken beautifully, keeping Phoenix solidly in the playoff mix.

10. STEELY RESOLVE: Bethlehem Steel FC had a terrible time of it with the New York Red Bulls II in its inaugural season, failing to score a goal in three consecutive defeats to the eventual USL Cup champion. On Friday night, though, the club’s 2-0 victory was one of a number of significant firsts that could have a major impact on the club’s playoff chances further down the line. To earn the victory at MSU Soccer Park, Steel FC got a major boost from former Red Bulls Academy standout, Adam Najem, whose first professional goal came not far from where he grew up in Clifton, N.J. A second-half tally by Santi Moar helped push the game out of reach for Bethlehem, which has now taken three wins in a four-game undefeated streak to move ahead of New York. The victory also gave Najem bragging rights over older brother David, who played the full game for the Red Bulls II, as Steel FC continued to roll.

11. HISTORY TIME: As compelling as this past weekend’s action proved, with more than 70,000 fans attending games to continue the league’s outstanding season in the stands, Monday night brings the potential for a historic moment for Real Monarchs SLC. Squaring off with a red-hot Reno 1868 FC at Rio Tinto Stadium, the Monarchs have a chance to become the first team in USL history to record nine consecutive victories. With a big week of action ahead, there might be no better way to begin proceedings in Week 14 than with what could be the best game of the round.