Three teams host MLS clubs in Fourth Round this week 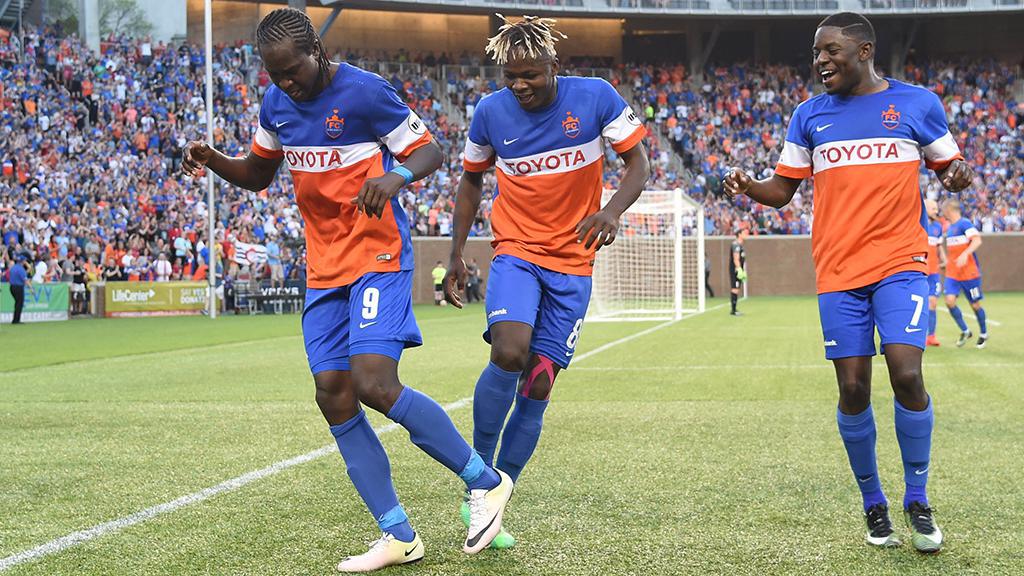 The Fourth Round of the 2017 Lamar Hunt U.S. Open Cup kicks off on Tuesday and Wednesday night as nine USL clubs square off with opponents from Major League Soccer, aiming to become the latest to make a deep run in the 104th edition of the historic tournament.

Three USL clubs will get to compete on home turf, with all three hosting MLS opponents for the first time in their histories in the tournament. Maybe the biggest spotlight in Wednesday night’s action will be on the first Battle of Ohio, which sees FC Cincinnati welcome Columbus Crew SC to Nippert Stadium for a 7 p.m. ET kickoff. After edging out River Cities Cup rival Louisville City FC in the previous round, FCC is hoping another big crowd can help cheer the side on to a victory in its first competitive game with Columbus.

Also on Wednesday night, Sacramento Republic FC and Saint Louis FC will also be at home to face off with Real Salt Lake and the Chicago Fire respectively. Here’s a look at all of the games featuring clubs this week.

Tuesday, June 13
Colorado Rapids vs. OKC Energy FC, 9 p.m. ET: OKC Energy FC makes the trip to Dick’s Sporting Goods Park after a solid run of recent form to go undefeated in its past five home games. Energy FC took a victory against Colorado Springs Switchbacks FC in the Third Round to book a return trip to the Rocky Mountains, and might be hopeful of getting a result against a Rapids side that sits at the bottom of the MLS Western Conference with four wins in 13 games.

Wednesday, June 14
FC Cincinnati vs. Columbus Crew SC, 7 p.m. ET: Cincinnati earned its first trip to the Fourth Round as Djiby Fall scored his second goal of the tournament against Louisville City FC on May 31, and hopes to benefit from its home-field advantage as Crew SC visits Nippert Stadium. Cincinnati has lost only once this season on home turf, and has yet to concede a goal in the Open Cup, meaning the Ohio clash could be a tight one.

New England Revolution vs. Rochester Rhinos, 7:30 p.m. ET: The Rhinos visit Anderson Stadium on the campus of Providence College aiming to repeat their past successes against MLS opposition. The Rhinos faced off with the Revolution last in 2014 in the Fifth Round after Rochester had defeated D.C. United in the previous round. New England took that contest 2-1 at the same venue, leaving the Rhinos looking to turn the tables this time.

Philadelphia Union vs. Harrisburg City Islanders, 7:30 p.m. ET: The City Islanders will be hoping for a role reversal when they return to Talen Energy Stadium for a rematch from this round a year ago against the Union. Harrisburg rallied in 2016 from two goals down to level the score in the first minute of stoppage time as Bobby Warshaw found the net, but had the prospect of overtime grabbed away as Walter Restrepo scored in the fourth minute of stoppage time to lift the Union to a victory.

Atlanta United FC vs. Charleston Battery, 7:30 p.m. ET: The USL Eastern Conference-leading Battery will meet their MLS partner for a first competitive meeting at Fifth Third Bank Stadium in Kennesaw, Ga., but will do so without leading scorer Romario Williams as he heads on international duty with Jamaica. The Battery have a history of springing surprises in the Open Cup, though, and may have learned something from the 2-1 Atlanta victory when the clubs squared off in the 2017 Carolina Challenge Cup this spring.

Saint Louis FC vs. Chicago Fire, 8 p.m. ET: Saint Louis welcomes the Fire to Toyota Stadium – Saint Louis as it faces a professional opponent for the first time in this year’s tournament. A road win against the defending Premier Development League champion Michigan Bucks earned STLFC a home game against the Fire, but the hosts could have their hands full with a Chicago side that is much-improved this season – sitting second in the MLS Eastern Conference – and brings the pedigree of four Open Cup titles to the table.

FC Dallas vs. Tulsa Roughnecks FC, 8 p.m. ET: The Roughnecks head to Westcott Field on the campus of Southern Methodist University in Dallas to take on the defending Open Cup champion as an underdog, but one that’s been punching above expectations already this season. After defeating San Antonio FC in a penalty shootout in the Third Round, the Roughnecks face another big test, and will be hoping their Argentinian playmaker Juan Pablo Caffa can produce some magic against a deep Dallas squad.

LA Galaxy vs. Orange County SC, 10:30 p.m. ET: Orange County will face the Galaxy in the Open Cup for the first time since the club’s inaugural season in 2011 when the teams meet at StubHub Center Track & Field Stadium. To advance to the Fifth Round for the first time in club history, OC will need to get by a Galaxy side that has seen a turnaround in form since the end of April, and is undefeated in its past six games, a big challenge for an Orange County side that has been held scoreless in each of its past three league games.

Sacramento Republic FC vs. Real Salt Lake, 11 p.m. ET: Republic FC hosts its first MLS squad at Papa Murphy’s Park, aiming to wash away the heartbreak of their last Fourth Round matchup, when it fell in sudden death in a penalty shootout against the San Jose Earthquakes two years ago. Real Salt Lake enters having struggled this season, recording only 14 points in 16 games in the MLS Western Conference, and is 1-7-1 on the road this season. The night could be ripe for Republic FC to earn a big result.