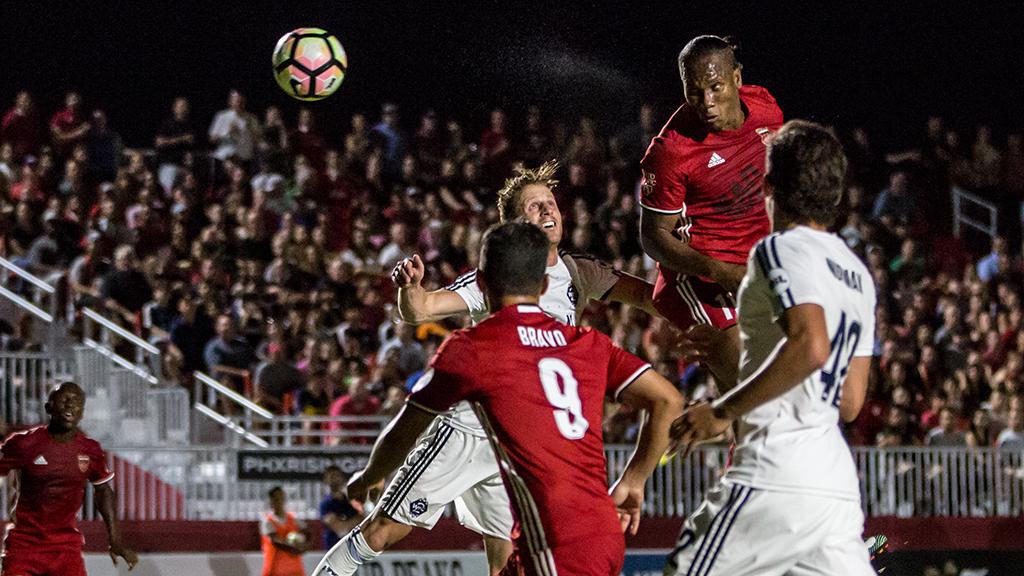 The debut of Phoenix Rising FC’s latest high-profile signing may have grabbed the biggest headlines of the past weekend, but with some big results that reverberated across both conferences in Week 12 of the 2017 USL Regular Season, there was plenty elsewhere to digest as well. The almost 90,000 fans in attendance across the country, giving the league its second-highest attended week of the season, were on hand for some major performances that look likely to resonate well beyond this weekend.

1. MAN OF THE HOUR: From the moment of his arrival in Phoenix in late April, the anticipation for Didier Drogba’s first appearance in Rising FC’s colors was sitting and building. When he took to the field on Saturday night, it’s unlikely any of the 7,062 fans in attendance for the clash with Vancouver Whitecaps FC 2 was left disappointed. From the start, Drogba looked like a man ready for the occasion, and he came away with an almost ideal debut of a goal, an assist, three chances created and seven total shots. His debut wasn’t the only to draw attention – that of former Sporting Kansas City player Amadou Dia down the left also caught the eye – but Drobga’s performance has set the stage for the expectations to come.

2. HITTING THE TARGET: Drogba’s individual performance drew the accolades, but the importance of the victory Rising FC earned, thanks to Shaun Wright-Phillips’ goal 13 minutes from the end, shouldn’t be underestimated. Phoenix now sits in the middle of a tight pack all vying for a place in the Western Conference Playoffs, with six points separating 10 teams between third and 12th place in the standings, and Orange County SC also potentially joining the fray should it take advantage of its games in hand. Phoenix will need more results like Saturday’s if it’s to emerge from what is setting up to be a compelling battle throughout the middle third of the season. 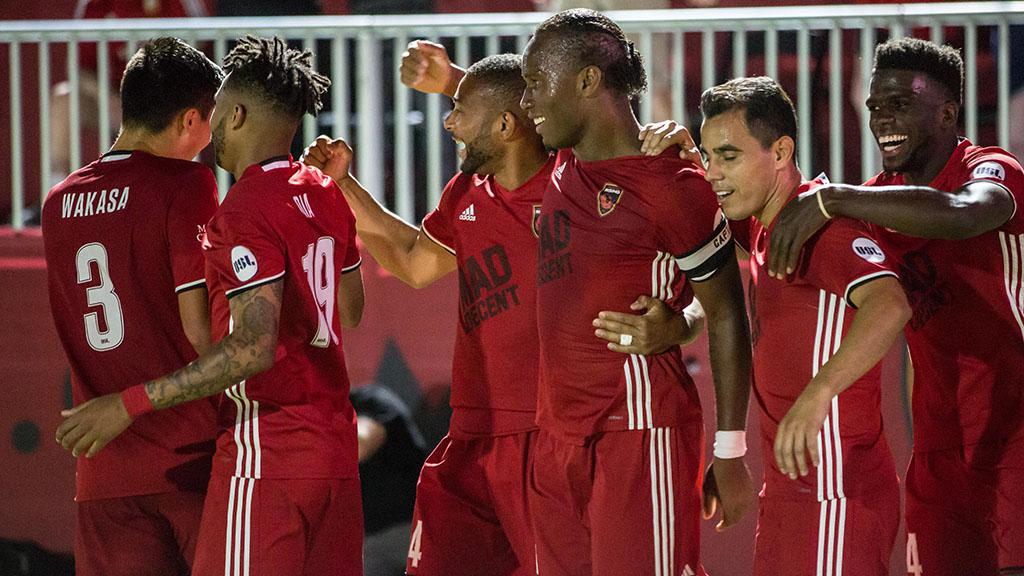 3. DOORSTEP OF HISTORY: One of the two teams sitting above the fray moved within one win of history on Saturday night, with Real Monarchs SLC continuing its outstanding run with a 2-0 victory against the Portland Timbers 2, the club’s eighth in a row. Real’s victory moved the side level with 2014’s Orlando City SC side for the most successive wins in USL history, as the club’s attack continued to motor forward. With both Charlie Adams and Sebastian Velasquez now in the top five in assists in the USL, and Chandler Hoffman only one tally away from his 40th regular-season goal in the league, the anticipation for next Monday’s chance at history should make for a remarkable night at Rio Tinto Stadium.

4. SILVER STREAK: The Monarchs’ winning streak will be the main attraction, but the wider reason why next Monday night’s game should be a must-see is the form of the visitor, Reno 1868 FC. Welcoming a season-high crowd of 6,060 to Greater Nevada Field – bolstered by an impressive group from the Tower Bridge Battalion on hand – 1868 FC continued its ascent in the Western Conference with a 2-0 victory against Sacramento Republic FC. With USL leading scorer Dane Kelly’s goal-scoring streak now at six games, and the team as a whole undefeated in its past seven games, 1868 FC will be in the type of mood to reverse its 5-3 defeat at the same venue earlier this season.

5. BREAKING THE HEX: Both the streaks the Monarchs and Reno are currently on are certainly welcome for both clubs. On Sunday, Louisville City FC broke a most unwanted streak of its own as in its sixth meeting with the New York Red Bulls II, the club finally emerged with its first victory. After last season’s penalty shootout loss to the Red Bulls II, Louisville likely had its first meeting with New York circled after the schedule came out earlier this year. Behind another strong attacking performance by Brian Ownby, and a stellar display defensively, Louisville came away with a comprehensive win, and continued its push toward the top of the Eastern Conference.

6. HOLDING FIRM: After earning a 1-0 victory against the Richmond Kickers on Saturday night at MUSC Health Stadium, Charleston Battery midfielder Justin Portillo said, “If you look at what we’ve done in the span of two games, I think it shows how versatile we are. We can beat you in different ways and there’s a lot to be said for that.” While the Battery didn’t emerge with a victory the week prior, the sentiment is understandable. On Saturday, in the 60th meeting all-time between the Battery and Kickers, it was Charleston’s defense that restored its luster, holding strong in the second half as Richmond tried to find an answer for Portillo’s first-half penalty kick. The Battery’s adaptability, built around its spine of defenders Taylor Mueller and Forrest Lasso, Portillo in midfield and Romario Williams in attack, have put the side solidly in first place, and ready for the challenges ahead. 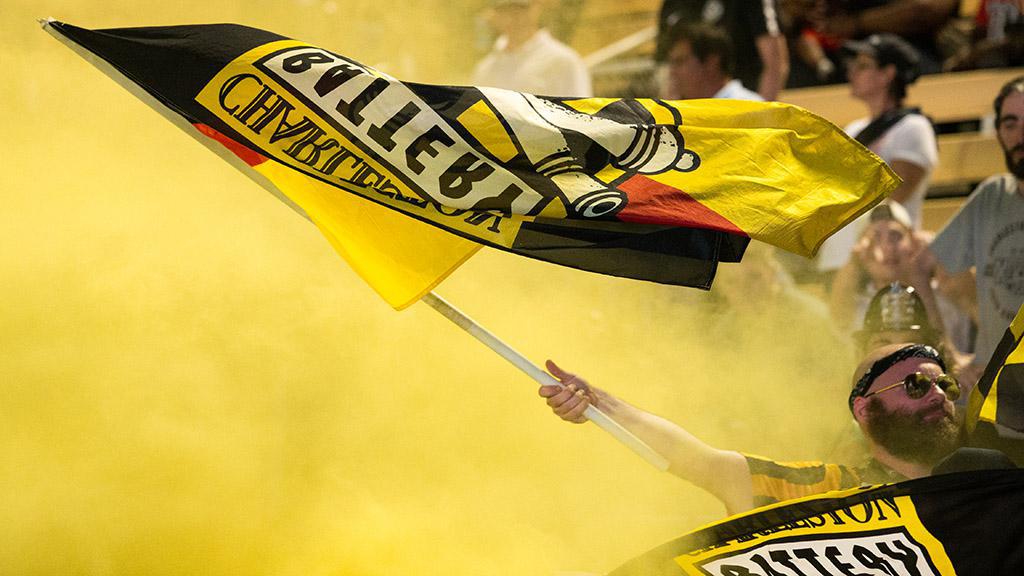 7. BREAKING THROUGH: After winning five of its first six home games this season, the Tampa Bay Rowdies are starting to learn what to expect from visitors to Al Lang Stadium; staunch defensive resistance. The latest display came from the Rochester Rhinos on Saturday, whose early goal allowed the visitors to earn a 1-1 draw and extend Tampa Bay’s winless streak to four games, and now looking over its shoulder at Louisville. The approach isn’t coming as a surprise to the Rowdies, who had chances to find a second-half winner, but picking apart opponents more consistently is going to be crucial to keep their current standing. “We know it’s going to happen most of the time, but we have to find a way around it,” said Saturday’s goal scorer Joe Cole. “It’s football. I know if we played a high-level MLS team, we’d probably do the same thing.”

8. STUCK IN NEUTRAL: The good news for San Antonio FC on Saturday night was it maintained both its undefeated record, and moved its shutout streak to seven games. The bad news was that other than a couple of glimmers in the second half, the side’s attack continued to lack the spark that had made it so effective earlier this season. A third 0-0 draw in the past five games as the side visited OKC Energy FC at a windy Taft Stadium left both sides happy enough, but after recording only one shot on goal, the pressure is continuing to build on the attack to take some of the pressure off its defense as it returns home next Saturday. 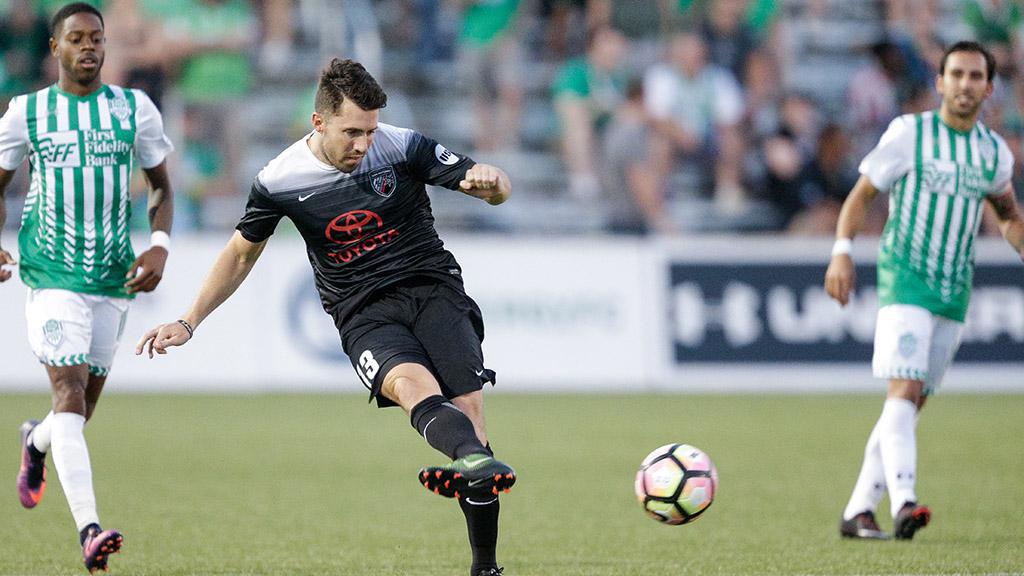 9. CAPITAL STEPS: The same problem that was befalling San Antonio was present for Ottawa Fury FC earlier this season, but after a 1-0 victory against the Harrisburg City Islanders at TD Place on Saturday night the team from Canada’s capital is now firmly in the middle of the Eastern Conference playoff race. With Sito Seoane notching his fourth goal of the season, Steevan Dos Santos seeing action late on, and Carl Haworth finally available on the bench after injury, things are looking good for Fury FC’s fortunes. “It’s entertaining to watch a team like this,” said Ottawa Head Coach Paul Dalglish after the game, and on current form it’s hard to disagree.

10. SWOOPING IN: Another big return from injury this weekend was that of Mark Anthony Gonzalez for the Swope Park Rangers, and the Canadian arguably couldn’t have timed things better. Coming on as a second-half substitute in Sunday’s game with Tulsa Roughnecks FC, the Rangers’ leading scorer a season ago quickly showed off his quality, completing all eight passes, breaking the Roughnecks’ offside trap twice for big chances – the second of which led to the insurance goal – and notching a pair of goals that grabbed away a 3-1 victory. The result might have been harsh on a Roughnecks side that had done most everything right until Jorge Luis Corrales toppled SPR’s Kharlton Belmar in the penalty area in the final minute, but those are the breaks sometimes.

11. GAINED AND LOST: The compactness in the middle of the Eastern Conference doesn’t quite compare to the number of teams as in the West, but results like Bethlehem Steel FC’s 2-1 comeback win against Saint Louis FC on Sunday evening are going to make the playoff picture a difficult one to decipher. With five teams sitting on 16 points, and not much leeway north and south of that in fifth place and down, the importance of every point is going to be magnified. Take Saint Louis, for example; starting Sunday’s second half, the side was comfortably in the Eastern Conference’s top four with its early lead. By the end of the 90 minutes it was sitting in 11th. The margins are going to be that slim moving forward.