A game-of-the-season candidate, and the Monarchs rise up 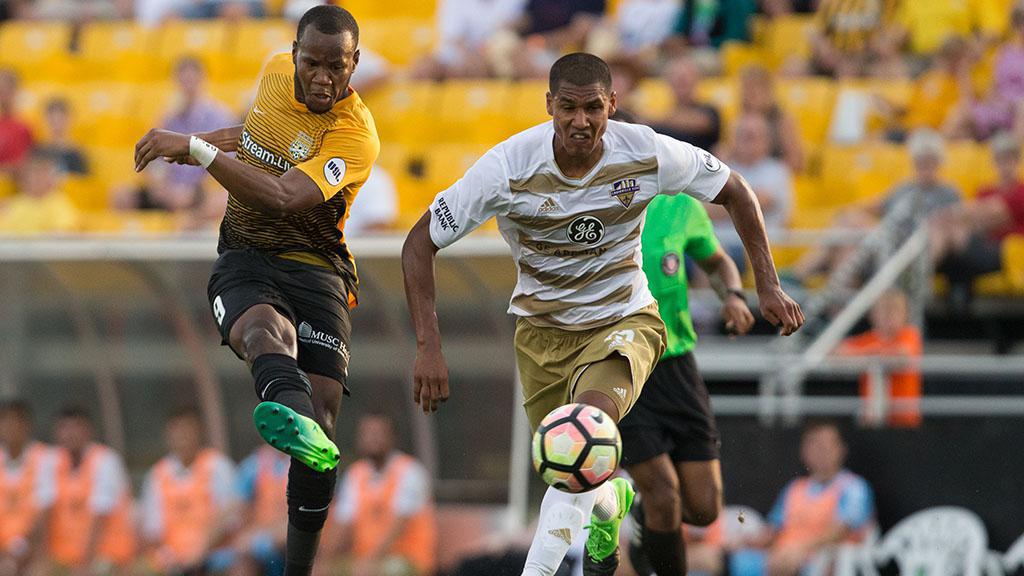 We’ve already seen some remarkable games in the 2017 USL regular season, but what the Charleston Battery and Louisville City FC provided on Saturday might have gone to the top of the list in terms of highlights, and drama. While two of the East’s major contenders were going back-and-forth, though, a new team rose to the top of the Western Conference, and put itself on the doorstep of history.

1. THUNDERING DOWN: Saturday’s 4-4 draw between the Charleston Battery and Louisville City FC wasn’t an unprecedented result in USL history; the same score happened twice in the 2013 season. What made it remarkable, though, was it provided the absolute opposite of what was expected between two teams who have fought tight battles in each of the past two USL Cup Playoffs. Instead, we had a game filled with exceptional finishes – the long-range strikes by Charleston’s Romario Williams and Louisville’s Brian Ownby would have lifted any game they appeared in – and the drama of the visitors coming back from the dead to earn a crucial point. The two teams meet twice more this regular season, but this game is going to be hard to top as the season plays out. 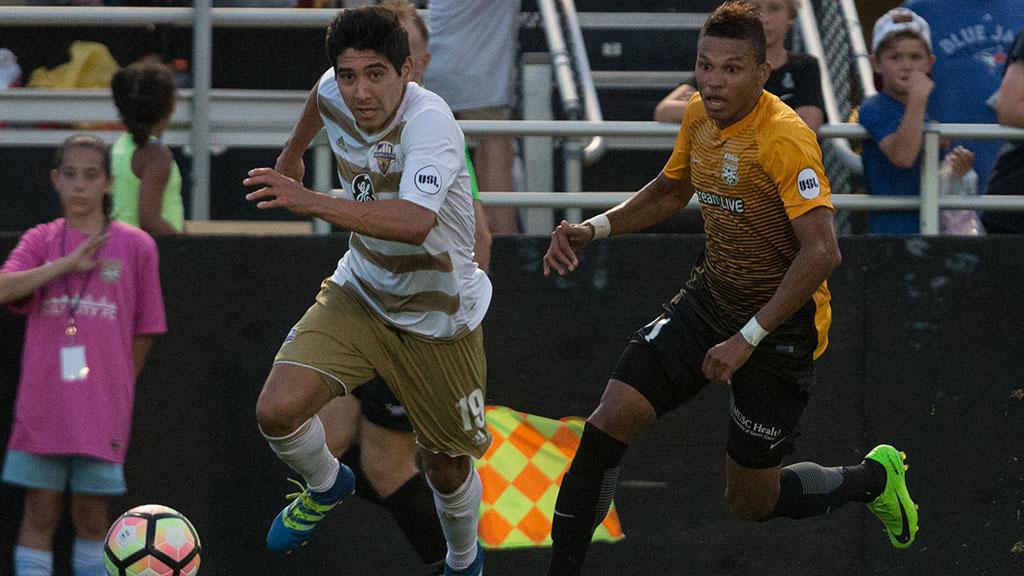 2. ROMARIO’S RISE: Reputedly named after the leading light in Brazil’s victory at the 1994 FIFA World Cup, Romario Williams continued his pursuit of the USL Golden Boot with another standout performance against a Louisville defense that had conceded only five goals in league action prior to Saturday. The Jamaican has now matched his goal total from the 2016 season with the Battery, and as a third-year pro the 22-year-old is now seemingly coming into his own as a forward that can beat you in a number of different ways. With Charleston set to face Atlanta United FC in the Lamar Hunt U.S. Open Cup on June 14, it will be interesting to see if he is given the chance to produce something similar against the side that sent him on loan, and if he can take his opportunity if given it.

3. MONARCHS RISE: A goal inside a minute, and another standout defensive display, and Real Monarchs SLC is on the verge of writing itself into the USL record book after the side took its seventh consecutive victory with a 1-0 win against Orange County SC on Saturday evening. The win, which moved Real into first place ahead of San Antonio FC, came via another link-up between goal scorer Chandler Hoffman and assist man Charlie Adams, both of whom now sit in the top four of their respective categories in the league. A home game against Portland is now the chance at equaling Orlando City SC’s record of eight consecutive wins set in 2014, but it feels like no matter what happens in that game, there’s much more to come from the Monarchs this season.

4. SAFC SLOWDOWN: Not too long ago, it was San Antonio FC that led the USL in goals. Now, after a third scoreless outing in its past five games, the side is still undefeated, but no longer on top of the Western Conference or the goal-scoring charts in the USL. Saturday’s 0-0 draw with the Swope Park Rangers certainly showed SAFC with more spark than it had shown in its narrow win against the same opponent, but with Billy Forbes being held without a goal in the month of May, teams appear to be starting to understand better how to limit San Antonio’s chances. The return of Cesar Elizondo from injury could certainly help, with the Costa Rican getting 28 minutes off the bench on Saturday, and with the SAFC defense playing as well as it is there’s not that much reason for concern. An attacking turnaround to take some pressure off Sebastien Ibeagha and co. at the back would be welcome, though.

5. PICK UP STEAM: Saint Louis FC had been looking for a turnaround of its own after a five-game winless streak that had seen the club score only twice going into its return to Toyota Stadium – Saint Louis. Thanks to a pair of first-half goals, and an impressive defensive display against an again vibrant Toronto FC II attack, STLFC moved itself back into the top eight in the Eastern Conference. Christian Volesky getting among the goals again has to be a very positive sign for Saint Louis overall, given the solidity the side’s defense had shown in its flood-induced hiatus from its home venue.

RELATED: Saint Louis Gets Back on Track 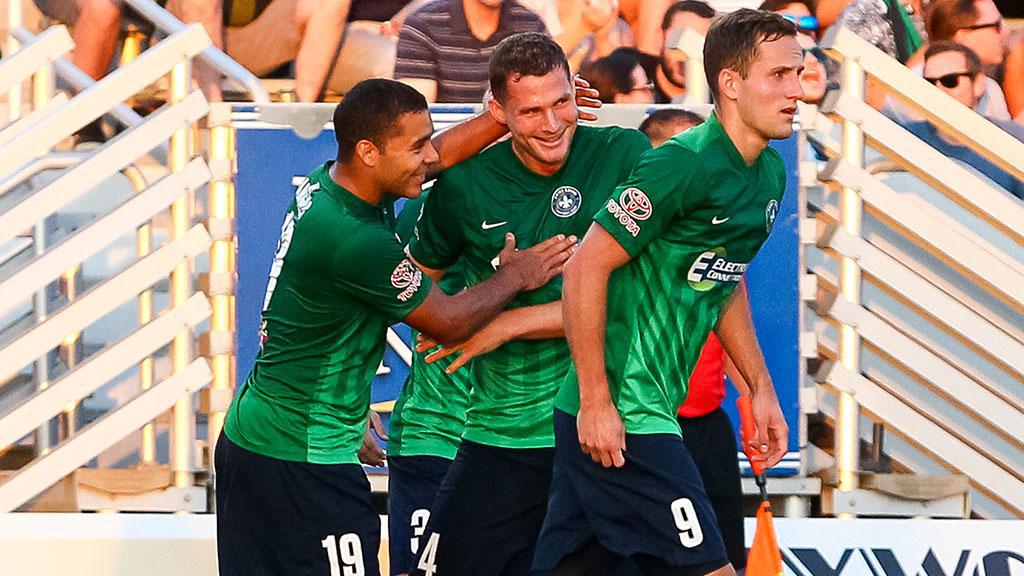 6. MAKING A MOVE: The Rochester Rhinos have the look of a team that’s rounding into another hard-edged Bob Lilley side, and with the games in hand it has on the teams around it in the Eastern Conference, Saturday’s 1-0 win against FC Cincinnati was a big step forward as others higher up the ladder could only draw. After its 5-0 shellacking at the hands of the Charleston Battery in mid-April, the Rhinos are undefeated in all competitions. A pair of positive results on its trip to Florida would put the side in a very strong position indeed by this time next week.

7. TAKING A BREATHER: Given the number of games his side has had to take on in the past month, it was understandable for FC Cincinnati Head Coach Alan Koch to try and rotate his squad against Rochester on Saturday. Unfortunately for FCC, the move didn’t pay off with a point on the road, and that’s going to put even more pressure on the team’s upcoming three-game home stand that sees the Charlotte Independence, Charleston Battery and Saint Louis FC all visit Nippert Stadium aside from the team’s Open Cup clash with Columbus Crew SC. Cincinnati is still in the playoff positions, but in a tightly bunched pack that has five teams currently sitting on 15 points, the margin for error is narrowing.

8. MOUNTAIN STRIKE: Rony Argueta doesn’t score many goals. As a holding midfielder, that’s not really his remit for Colorado Springs Switchbacks FC. When he does, though, he definitely makes them count, as Saturday’s blast against OKC Energy FC illustrated. The fourth regular-season goal of Argueta’s career with the Switchbacks was reminiscent of his only goal a season ago, which helped the Switchbacks take a 2-1 victory late in the season against Seattle Sounders FC 2. As was the case then, Saturday’s goal that earned a 1-0 victory at Weidner Field gave Colorado Springs a major boost in the Western Conference, and renewed hope that a playoff berth will be waiting again for the Switchbacks at the end of the season.

9. PARRA TIME: Seattle Sounders FC 2’s line across the Western Conference standings looks a little confusing, given the minus-5 goal differential that the side possesses thanks to some horrific defeats this season. In Saturday night’s 3-0 win against the LA Galaxy II, though, we saw a side that remains a legitimate playoff contender despite the two heavy defeats it has suffered this season. With Irvin Parra stepping up offensively in his second season with his fourth and fifth goals of the season, Seattle is keeping its nose in front of a chasing pack, while keeping an eye over its shoulder.

10. FIT TO BE TIED: It may have ended scoreless, but Sacramento Republic FC and Rio Grande Valley FC offered up one of the more interesting games of the weekend at Papa Murphy’s Park on Saturday night as both clubs produced flowing, attractive soccer that felt like a fair result. For the Toros in particular, earning a point on the road to maintain their position in the Western Conference will feel like a major plus, as they remain within touching distance of third place in the standings with as many as four games in hand on the teams above it. A busy week as RGVFC visits Reno 1868 FC on Wednesday and hosts Seattle on Saturday should provide some more compelling action.

11. SEPARATING THE PACK: If the opening third of the season, and all of the imbalance it brought to the games played column in both conferences, felt like a prelude, then these next nine weeks as we hit the middle third are gearing up to be where some dreams will rise, and some will fall. The dog days of summer are here, and so are a lot of games in a relatively short space of time for teams that are looking to make their move. That should make for a fascinating few weeks throughout the upcoming month that will see more than 60 regular-season games completed by the end of its conclusion.