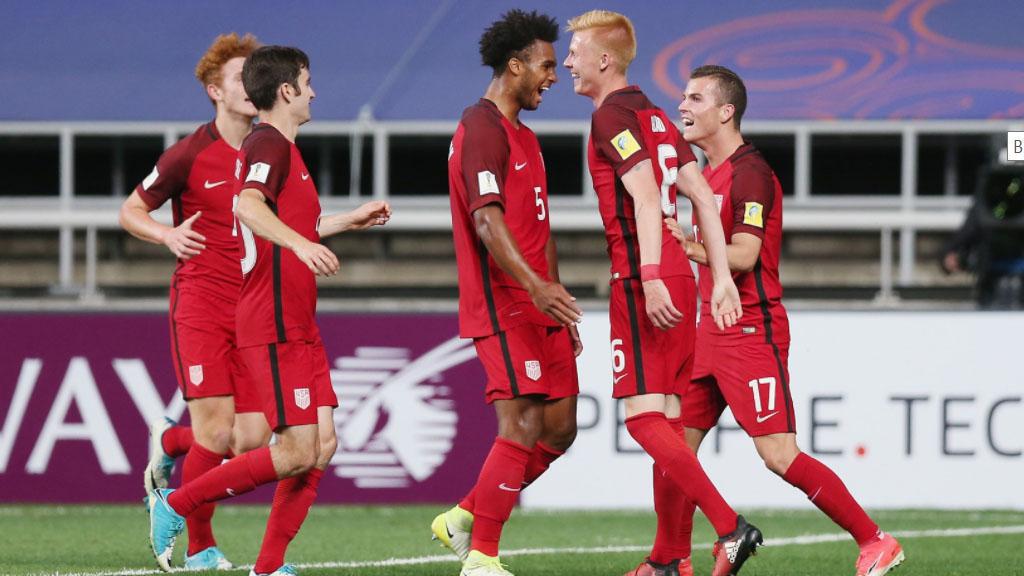 Former Real Monarchs SLC loanee Justen Glad celebrates with the Swope Park Rangers' Erik Palmer-Brown, Brooks Lennon, Luca de la Torre and Josh Sargent during the United States U20s' 6-0 victory against New Zealand in the Round of 16 at the 2017 FIFA U20

INCHEAON, Korea Republic – The United States U20 National Team got a goal and assist apiece from former Real Monarchs SLC loanee Justen Glad, Josh Sargent and Brooks Lennon as it blasted New Zealand 6-0 to advance to the Quarterfinals of the 2017 FIFA U20 World Cup on Thursday night at Incheon Stadium. The United States will face Venezuela in the next round on Sunday afternoon. The U.S. threatened early, as a through-ball by 2016 USL Cup-winner Tyler Adams put Brooks Lennon in behind down the right, and his cross to the back post was headed on goal by Josh Sargent to force a save. The game settled into rhythm as the U.S. held more possession and New Zealand tried to hit quickly, but the U.S. took the lead 13 minutes before halftime as a low corner from the right came to Glad, and his low finish deflected off Sargent’s shin as it made its way through a forest of legs and into the net. The U.S. kept up the pressure early in the second half, and Eryk Williamson had a strong low shot saved by New Zealand goalkeeper Michael Woud. New Zealand created its first good chance in the 55th minute as Moses Dyer shot wide from 14 yards after arriving late in the penalty area. The United States put the game away with two goals in two minutes midway through the half, though, the first a belter by former Charleston Battery loanee Jeremy Ebobisse as he controlled just outside the penalty area and fired home a fierce turning shot home. Lennon made it three moments later as he got on the end of a pass by Williamson and slotted home into the left corner from the right side of the penalty area. Sargent almost added to the lead with 15 minutes to go, but Glad added a fourth moments later, and Bethlehem Steel FC defender Auston Trusty a fifth from a corner kick with six minutes to go after being brought on as a substitute. Former Super Y League standout Lagos Kunga notched a sixth in stoppage time to complete the rout.

Justen Glad, United States – The former Real Monarchs SLC loanee almost scored the opening goal of the game, only for a deflection to give it to Josh Sargent, but made sure his name was on the scoresheet with a good header late that capped a fine all-around performance.