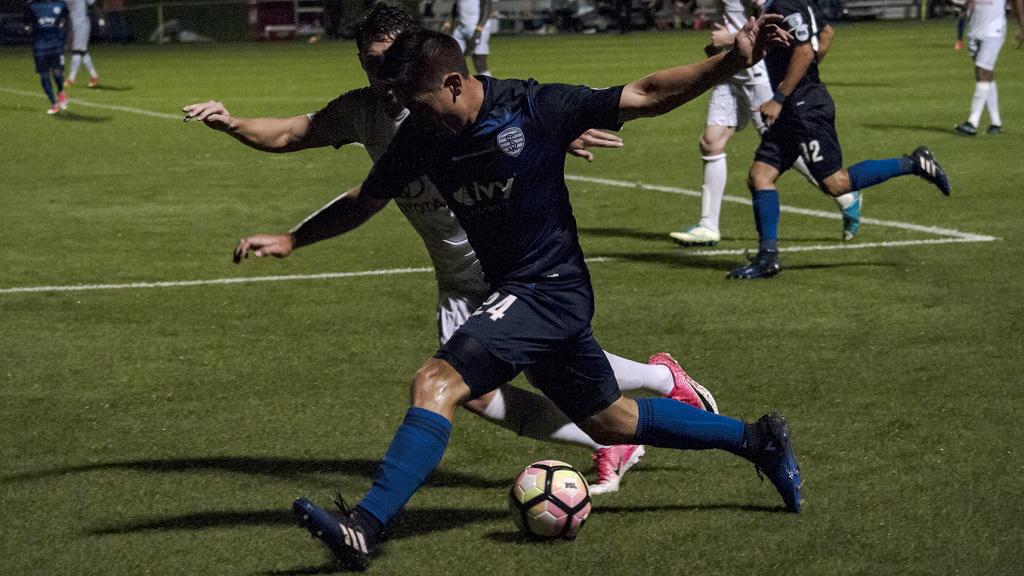 With one-third of the 2017 USL regular season complete, we’ve never in the league’s history seen anything like the accomplishments by San Antonio FC and Real Monarchs SLC. Victories for each side over the past weekend of action continued to stretch the two clubs’ lead at the top of the Western Conference, and the overall standings, and both made pieces of history in the process.

1. PARRY AND THRUST: Going into a venue where its hosts had won nine consecutive games, San Antonio FC’s performance against the Swope Park Rangers on Friday night was akin to that of a master fencer. SAFC’s 1-0 victory saw the side consistently under pressure, conceding 77 percent of possession to the Rangers, but evaded the tip of Swope Park’s sabre and struck when the Rangers left themselves vulnerable on the counter. It only took one of those moments, a great attack led by former Swope Park standout Kris Tyrpak that resulted in Mark O’Ojong’s first goal for the club, and San Antonio departed with a record-tying fifth consecutive road victory.

2. RAY OF HOPE: Swope Park suffered its first loss in its brief series against San Antonio with the defeat on Friday, but it’s unlikely the result has dissuaded the side that its approach was the right one. Indeed, if not for some poor finishing in the first half the Rangers could easily have been ahead, and coaxed San Antonio out of its defensive shell. “Looking through the stats I think we were the dominating team and sometimes in soccer this is not enough,” said Head Coach Nikola Popovic after the game, and with his side having completed 85 percent of its 651 passes, and outshot SAFC 11-4, it’s going to be fascinating to see what happens when these two sides play again at Toyota Field on Saturday.

3. ROYAL FLUSH: While San Antonio was tying a league record with its fifth consecutive road victory, Real Monarchs SLC set a new club mark with its sixth consecutive victory on Sunday as a dominant first-half display earned a 2-1 win against Vancouver Whitecaps FC 2. The Monarchs were exhilarating in the first half, outshooting WFC2 15-0, and could have been further ahead if not for some good goalkeeping by Vancouver’s Paolo Tornaghi and the woodwork. The Monarchs are still in position to usurp San Antonio, although they’ll probably have learned a lesson about taking the foot off the pedal as WFC2 almost clawed back into the game late. With the Monarchs now two wins away from tying Orlando City SC’s USL record for consecutive victories, there’s a major historic feat to be accomplished sitting there for Head Coach Mark Briggs’ side.

4. REGAINING THE THRONE: Three league games into his FC Cincinnati career, it certainly seems like Danni König has regained the confidence that made him the runner-up in the race for the 2015 USL Golden Boot. His third goal in the past two outings on Saturday lifted FCC to its first back-to-back victories in the league this season after a 1-0 victory against Toronto FC II in front of 18,214 fans at Nippert Stadium. König is attacking the net again, getting into the places where he has found success in the past as FCC’s strong wing play has provided the service he thrives on. “It’s important to have moments like tonight, where you can recognize how each person and part work together,” said FCC Head Coach Alan Koch after the game. 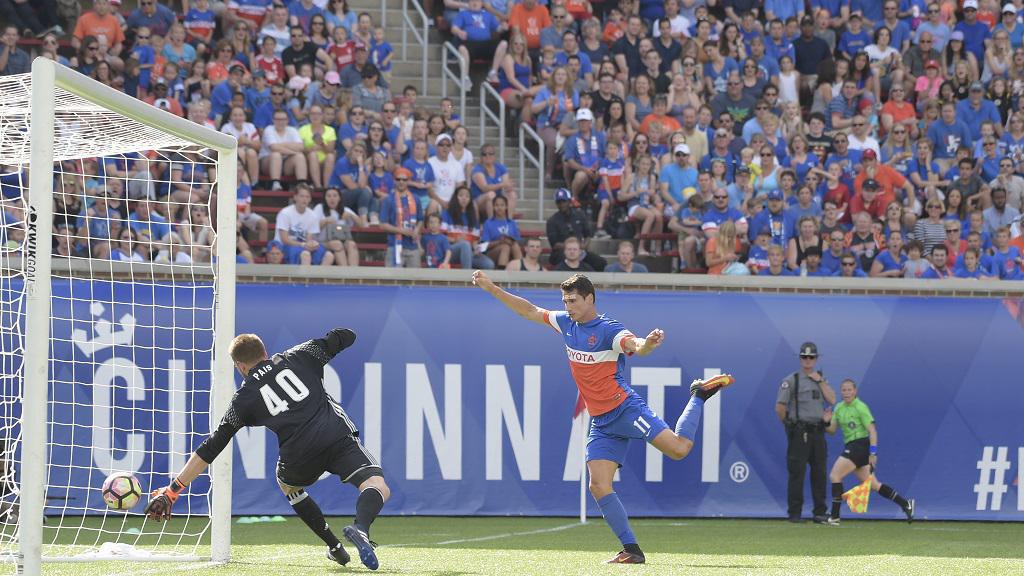 5. CLOSING THE GAP: Cincinnati’s victory came alongside setbacks for the two teams the club is chasing at the top of the Eastern Conference, with the Tampa Bay Rowdies needing an 87th-minute equalizer by Neill Collins against Saint Louis FC to earn a 1-1 draw on home turf and the Charleston Battery losing a halftime lead on the road in a 2-1 defeat to the New York Red Bulls II. The team that might have benefited the most from this weekend’s action, though, is the side that was sitting on the sidelines, with Louisville City now having the chance to cash in its games in hand and make a surge toward the top of the standings as it visits Charleston this Saturday.

6. SET-PIECE SHOWCASE: After the Charleston Battery’s Justin Portillo had put his side ahead with an exquisite free kick from 20 yards at MSU Soccer Park on Sunday against the New York Red Bulls II, it seemed to almost act as inspiration for the Red Bulls II’s Derrick Etienne Jr. The Haitian international one-upped Portillo’s finish with 15 minutes to go in their clash on Sunday with a sumptuous strike that bent just inside the left post to give New York a 2-1 victory. The win was an important one for the defending champion, which had suffered back-to-back home defeats against the LA Galaxy II and Ottawa Fury FC. “We didn’t want to lose another game at home, definitely,” said Etienne after the win, which kept New York in the East’s playoff positions.

7. ATTACKING FORCE: Ottawa Fury FC had gotten off to a slow start offensively on home turf in its inaugural season in the USL. A five-goal explosion against a Richmond Kickers side that hadn’t allowed multiple goals in a game yet this season earned a 5-3 victory, pushed the side into the playoff positions. It also likely provided even more confidence as the side heads to BMO Field on Wednesday for the second leg of its Canadian Championship semifinal against a Toronto FC side that also showed off its attacking potency this weekend. It certainly wasn’t plain sailing. Richmond held the lead after an hour thanks to Alhaji Kamara’s hat trick, but Ottawa stuck to the task and came through with a big win. 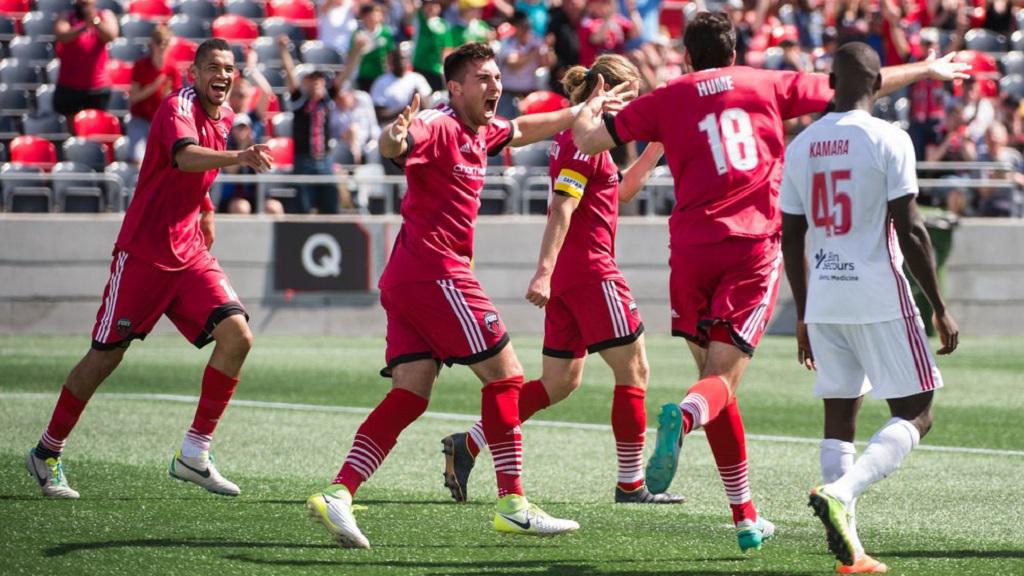 8. KICKED OUT: The last time the Richmond Kickers conceded five goals in a game, it marked the end of a historic run in the USL’s history as the Charleston Battery notched a 5-2 victory on August 3, 2013 to bring the Kickers’ 22-game undefeated streak to an end. Saturday’s defeat to Fury FC was another warning sign for the side as another streak looks in danger of coming to an end. The Kickers have reached the USL Cup Playoffs in every season of the league’s history, but now sitting with 10 points from 11 games, the side cannot be wasting the type of offensive performances it put in on Saturday. The battle is far from over, but the Kickers need some positive momentum, and fast.

9. JACK IN THE BOX: After a slow start that saw the side go winless in its first three games, the Charlotte Independence appear to have found their feet, and could be in line for a swift move up the Eastern Conference in the next few weeks after a 3-1 victory against Orlando City B on Saturday night. With Jorge Herrera experiencing a resurgence in form after more limited minutes last year – his goal on Saturday moved him into second all-time in the USL with 43 – and Enzo Martinez appearing back to his best, Charlotte’s next three league games against Tampa Bay, Louisville and Cincinnati could offer a window into how strong a contender this side is.

10. ON THE UPSWING: Phoenix Rising FC again had to rally from a goal down against the LA Galaxy II, but a stellar pair of performances by Eric Avila and Jason Johnson earned the side a 2-1 win on the road on Saturday night to continue its current run of alternating wins and losses. Phoenix’s consistency has been the biggest obstacle to breaking into the Western Conference’s top eight, but with players like Johnson starting to find form and the club’s new Head Coach Patrice Carteron on the verge of arriving, Rising FC is still well-positioned in the middle of the pack.

11. RUNNING THE GAUNTLET: Tulsa Roughnecks FC continued its outstanding home form this season on Saturday night with a 3-1 victory against the Portland Timbers 2 in a lightning-delayed encounter at ONEOK Field that saw the side move into third place in the Western Conference. After a week off next weekend in the league slate, though, we may be getting to a key moment of the season for Head Coach David Vaudreuil’s side. Four consecutive games against San Antonio FC, the Swope Park Rangers – both home and away – and Real Monarchs SLC are going to provide a major test for the Roughnecks. Come through that in positive fashion, and we might be looking at a serious playoff contender.