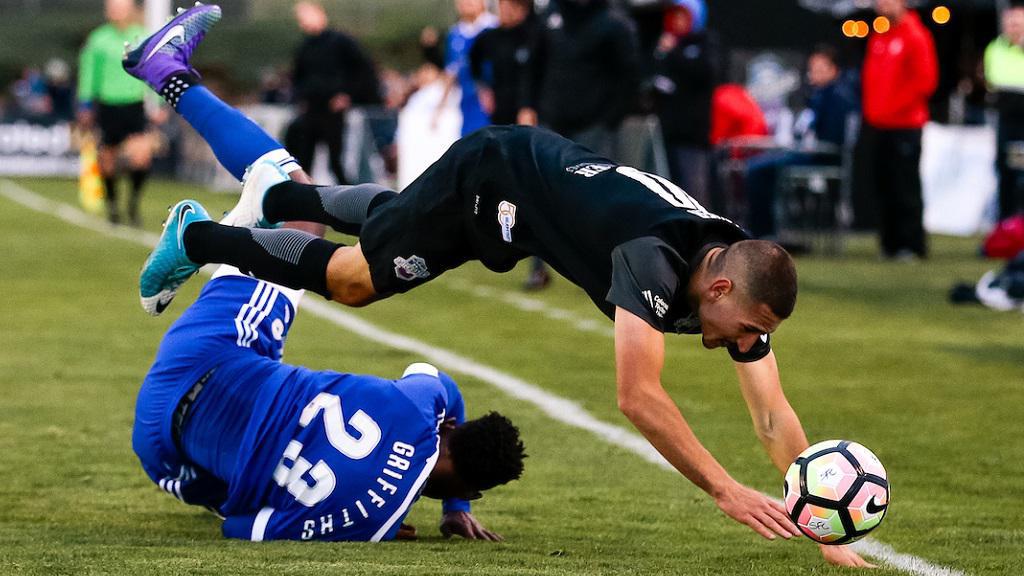 COLORADO SPRINGS, Colo. – Colorado Springs Switchbacks FC has had a difficult time trying to piece together a 90-minute performance this season.

The Switchbacks were in dire straits Saturday against what had been one of the hottest teams in the league, expansion Reno 1868 FC.

Thanks to a strong second half that included a pair of equalizers from defender Jordan Burt, the Switchbacks managed to salvage a point en route to a 3-3 draw at Weidner Field.

“I don’t know why we came out the way we did, but we played the way we needed to in the second half,” Burt said to the Colorado Springs Gazette. “When your backs are against the ropes like that, everyone had to have a gut check. Our guys’ character kicked in.”

Reno, which mounted a three-game winning streak heading into the match, appeared to be adding to that dominant trend with a 2-0 lead that included the first of two Antoine Hoppenot goals and the league’s top goal scorer Dane Kelly’s 10th strike.

Veteran forward Aaron King, who was a first-half sub, kick-started the comeback and Burt’s nose-the-grindstone ethic turned the match around.

“I give the guys credit, to fight back with good character, and hopefully we can build on this result,” said Head Coach Steve Trittschuh.

“We’re a little disappointed to only get three points at home, but we’ll take one,” said Eddy Prugh, who set up Burt’s 88th-minute equalizer.

The draw did put an end to Colorado Springs’ two-game losing streak, but plenty of work is needed to be done moving forward if the squad wants to maintain its spot in the top half of the Western Conference standings. The Switchbacks (3-4-5, 14 points) have played more matches than every other West side. They prepare for two matches against OKC Energy FC – once in U.S. Open Cup play Wednesday and then in regular-season action next Saturday, with both games at home.

If the Switchbacks want to see their Open Cup run continue and stay relevant in the West standings, they will have to replicate the second-half grit they showed against Reno and play that way from the opening whistle.

“The lesson out of this game is that we have to start with the intensity that we played in the second half and we also have to make sure that we’re on the front foot, that we’re the aggressors,” Switchbacks assistant coach Wolde Harris told the Gazette. “Especially at home, looking to dominate the opponent and not being passive. I think that’s the takeaway.”