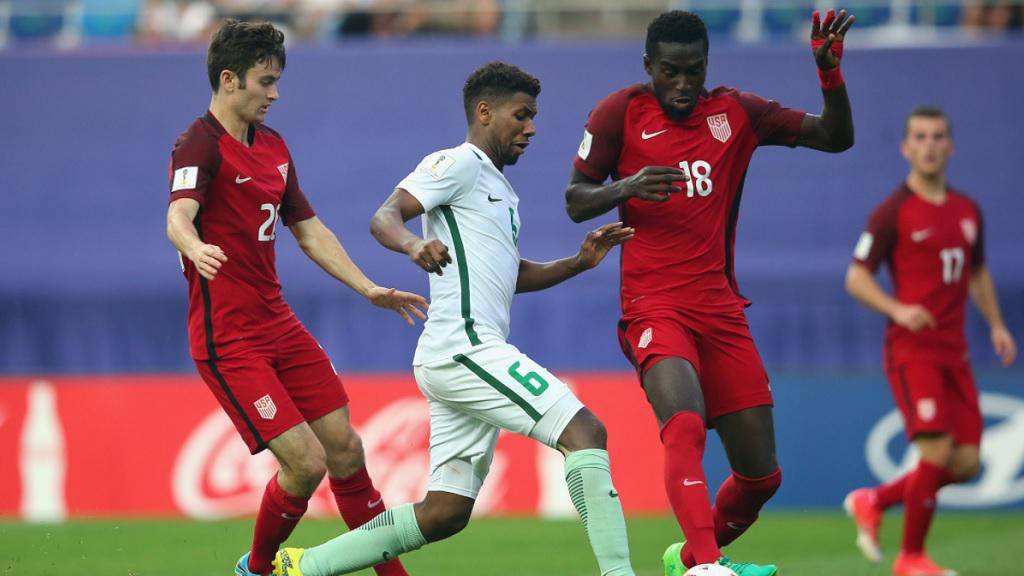 DAEJON, Korea Republic – The United States U20 National Team was held to a 1-1 draw by Saudi Arabia in its final game in Group F at the FIFA U20 World Cup on Sunday night at Daejon Stadium, but earned first place in the group with the point as Senegal and Ecuador finished scoreless in the group’s other contest. The game was choppy early, and the United States’ only real chance came in the 21st minute when a turnover saw Brooks Lennon set up Josh Sargent for a volley that went wide of the right post. The U.S. took the lead five minutes before the break, however, as a chipped pass in from the left by 2016 USL Cup-winner Tyler Adams of the New York Red Bulls found Sargent in the penalty area. His pass came to Luca de la Torre, and after the Fulham midfielder’s low shot was saved Brooks Lennon tucked in the rebound. Things became more complicated just before the halftime whistle when Cameron Carter-Vickers was sent off for his second yellow card, but the United States looked solid for the opening 15 minutes of the second half. Saudi Arabia’s Ayman Alkhulaif forced a big save from Jonathan Klinsmann in the 68th minute, while former Real Monarchs SLC loanee Justen Glad could have done better with a header from a corner a few minutes later. Saudi Arabia tied the game with 16 minutes to go as Alamri Abdulelah headed home from a corner kick, but the United States held on, and saw the group’s other result go its way, to finish in top spot in Group F.

Erik Palmer-Brown, United States – The Swope Park Rangers loanee was excellent throughout the second half in the defensive end when the U.S. was down to 10 men, helping earn the point the side needed.