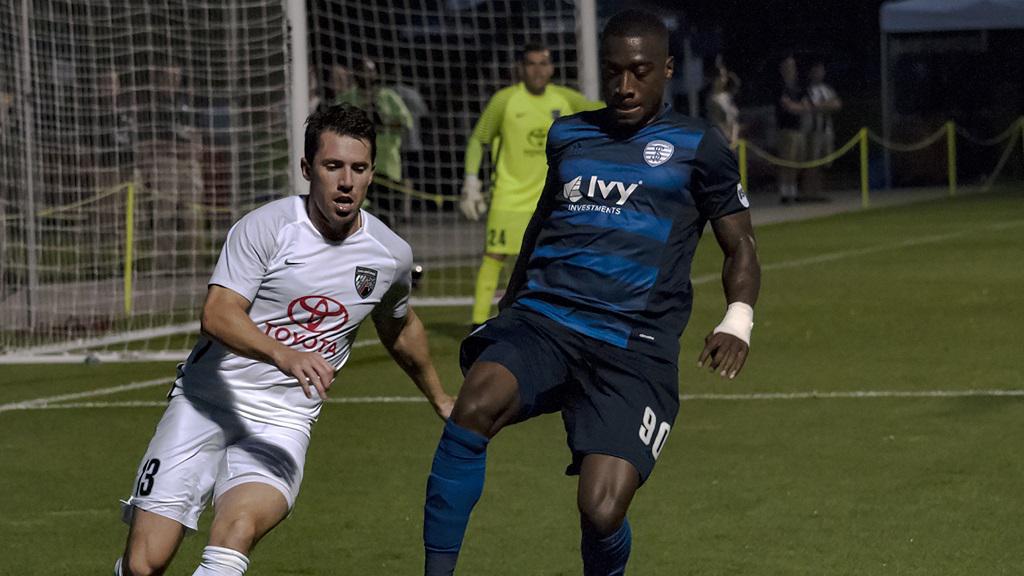 KANSAS CITY, Mo. – Entering Friday night’s contest, the Swope Park Rangers knew the challenge it would face to continue a nine-game home winning streak that extended back to the start of September, 2016.

But despite dominating possession and having its chances to break down San Antonio FC’s defense, the defending Western Conference champions came up empty-handed in a 1-0 defeat at Children’s Mercy Victory Field that kept SAFC’s undefeated start to the season alive.

“It’s been magical,” said Swope Park defender Amer Didic. “It started last year and led us to the USL Cup Final. It’s frustrating losing, obviously, and breaking that streak, but all we can do is look ahead and bounce back.”

San Antonio’s first win in the all-time series between the two clubs came as the game played out in the fashion most had expected. The current Western Conference leaders sat deep, inviting Swope Park on. As a result, the game’s statistics made for remarkable reading.

“Looking through the stats, it’s unbelievable,” Swope Park Head Coach Nikola Popovic. “Seventy-seven percent possession, more shots at goal, 651 total passes. With these kinds of numbers, you have to score a goal and we didn’t.”

Arguably the Rangers’ biggest chance of the night didn’t finish with a shot. Kevin Oliveira was played into the right side of the penalty area in the 17th minute by Lebo Moloto’s pass and had a one-on-one opportunity against SAFC goalkeeper Diego Restrepo, but rather than shoot he tried to slip one more pass into Nansel Selbol in the center of the penalty area. The pass proved too close to Restrepo’s reach, and the San Antonio stopper got a hand to the ball, allowing his defense to clear.

Missed opportunities like that one came back to bite the Rangers eight minutes into the second half when SAFC took the lead through Mark O’Ojong. A counter-attack led by former Swope Park player Kris Tyrpak broke down the right, and Tyrpak’s cross to the back-post found O’Ojong’s run for a header back into the right corner of the net.

“They are a very good team,” said Popovic. “If you look at many of their players, they could be part of an MLS team so this is one of the best teams in the USL.”

With their home winning streak over, the Rangers will now have the first crack at ending two of San Antonio’s streak when the home-and-home series switches to Toyota Field next Saturday night. SAFC’s 11-game undefeated start to the season and five-game shutout streak will both be targets for Swope Park as it looks for its first road win of the season.

Certainly, after Friday’s encounter, the expectations for the rematch are definitely raised.

“I think that’s ones of our best games this season and I’m looking forward to playing next weekend at their place,” said Didic. “We’ll stick to our game plan and how we play and look forward to hitting the back of the net.”